Donald Trump: the maverick, narcissistic salesman | World| Breaking news and perspectives from around the globe | DW | 31.10.2016

Donald Trump has been making himself into an equally brash and boorish brand name for 40 years now. Two of his biographers say that the Republican's personality basically begins and ends with his enormous self-love. 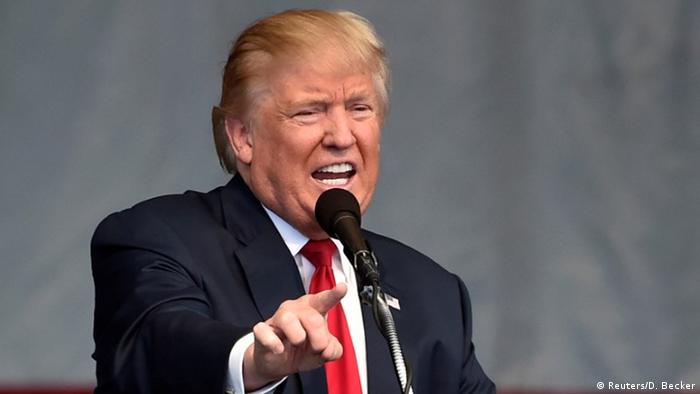 Ask Trump biographers what the Republican candidate for president is like, and they’ll start free-associating, almost as though they can’t help but channel the man himself when they speak of him.

Aggressive, rambling, unprincipled, materialistic, boastful, shrewd, undisciplined, mercurial and charismatic are some of the words they use to describe Trump. But two words stick out: narcissism and salesman.

"He's a salesman, and he's selling himself - he believes in himself," Gwenda Blair, author of two books on Trump and the Trump family, told DW.  "Very occasionally when someone gets to him with the idea that something he did was not successful, he reacts like he's been stung. He's visibly very disturbed by that and lashes out. It's a narcissistic wound."

Biographer Timothy L. O'Brien, author of the book "TrumpNation," knows whereof Blair speaks. Trump unsuccessfully sued him for $5 billion (4.5 billion euros) for having the temerity to suggest that the real-estate tycoon turned reality - TV star was worth less than he publicly claimed.

"He's essentially a seven-year-old boy grown old. He can be engaging one-to-one, but he's also a very undisciplined person, intellectually, emotionally, financially and publicly," O'Brien told DW. "He's a profound narcissist. The person he's most interested in every waking moment of his life is himself."

Blair and O'Brien agree that there is no private Donald Trump other than the one we all see on television, or as Blair puts it: "That way of talking is who he is." So the question is less what the man is like than how he won the Republican Party's nomination since, by any account, Trump is one of the most unusual major candidates for the presidency the United States has ever seen.

Someone must be to blame

As easy as it as to criticize Trump's personality, his biographers also feel that it's important not to underestimate his ability to channel rage felt by many Americans.

"Donald Trump's candidacy reflects the very long arm of the 2008 financial crisis," O'Brien says. "That crisis left a lot of working-class, post-industrial American workers on very uncertain footing. Their ability to pay mortgages, their pensions and their ability to put their children through school were threatened. The whole notion of the American Dream was threatened."

Trump: I will kick out the "bad hombres"

Trump: I will kick out the "bad hombres"

"There is a sense of resentment abroad in the land about being left out, about an elite that's running things, about a Congress that's broken, about a tiny percentage up at the top that's manipulating everything," Blair concurs. "Somebody’s got to be to blame. And Trump comes along and gives a long list of people who are to blame, from immigrants to Mexicans to Muslims to women to the lying media."

Another factor in Trump's ability to appeal to masses of people is his self-belief, which Blair says was instilled in him in childhood. In his private life, Trump is a teetotaler. His drug, if you will, is success.

But the irony is that while God may have a plan, Trump most often does not.

Freaked out by himself? 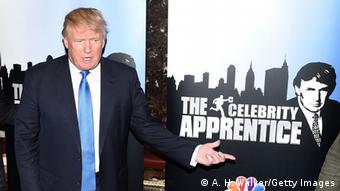 For 14 years, Trump starred in the reality TV show 'The Apprentice'

Trump announced that he was going to run for president three times in the past only to back away from the idea before things got serious. O'Brien says that Trump rarely plans anything in the long term.

He thinks the Republican candidate gradually stumbled into politics after his business career went sour, and he transitioned from being a legitimate real-estate developer into a TV celebrity and someone who lends his name to everything from underwear and steaks to vodka and buildings.

"I think he realized: I got all this attention and free publicity simply by making a few campaign stops," O'Brien says. "It's great free marketing and he wasn’t wrong about that. Somewhere back in the reptilian portion of his brain, there has to be a part of him that's freaked out he ever got this far because he knows he's not suitable to hold office."

Trump's biographers doubt that he holds any deep-seated political convictions, a view supported by the fact that the Republican candidate has backed independent and left-wing positions in the past. The current conservative iteration of Trump the politician may have arisen simply because the opportunity was there on the Republican side, although he also seems to have a particular animus against Barack Obama, who has often publicly mocked the businessman.

"In 2011, he starts with the birther thing and taps into this not-very-deep-down racist rage at having a black man in the White House," Blair says, referring to the conspiracy theory that Obama was not born in the US. "That's when he pivots away from his earlier somewhat liberal political postures. That's when he takes a hard-right turn."

An entertaining but dangerous figure 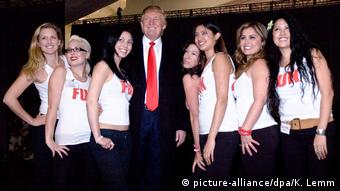 Trump has been excoriated for his treatment of women

In many situations, Trump's lack of fixed political beliefs may be an advantage, but his biographers say it is also indicative of a basic absence of character.

"He's not constrained by ideology or any kind of morality, so he is likely in some circumstances to find a way to accomplish things that seem impossible," Blair told DW. "But there's a notable lack of ethical judgement and morality in all that."

If the presidential race were exclusively about American voters' dissatisfaction with the polite status quo, Trump would be a shoe-in. But although the majority of voters may view his Democratic rival Hillary Clinton unfavorably, Trump is often seen as positively deranged. Certainly, his late-night Twitter explosions and his denigration and groping of women seem - to quote Clinton - "unhinged."

"An obvious measure of his insecurity is the things he brags about," O'Brien says. "If he was secure about being a wealthy person, he wouldn’t need to brag so often about how much money he has and drastically inflate it … If he was really secure about his appeal to women, he wouldn’t constantly need to go around and boast about how many women he’s slept with or tried to sleep with."

And although Trump's outlandishness makes him an entertaining, even fascinating public figure, his biographers say his lack of knowledge about and interest in the world, combined with the rest of his personal flaws, should disqualify him for the White House.

"Trump is dangerous person," O'Brien warns. "He's dangerous because he's willfully ignorant and a profound bigot. Because he's insecure about who he is, he goes overboard in how he lashes out. Somebody who has access to the nuclear button but has no sense about the parameters of world affairs is by nature a dangerous person."

Why many Republican lawmakers won't shed a tear if Trump loses

Donald Trump's erratic campaign has Republicans running for Congress wringing their hands. But with three months and possibly many more unpredictable Trump outbursts to go, they are caught between a rock and hard place. (11.08.2016)

Hotels, resorts and a big ego

Donald Trump's newest 5-star hotel is situated in Washington's Old Post Office and is less than a mile away from the US Capitol. It's the latest addition to the business empire of the Republican presidential candidate. (09.09.2016)