In December, Trump reversed decades of US policy to recognize Jerusalem as Israel's capital. Israeli Prime Minister Benjamin Netanyahu termed the decision "historic" during his meeting with US president on Monday. 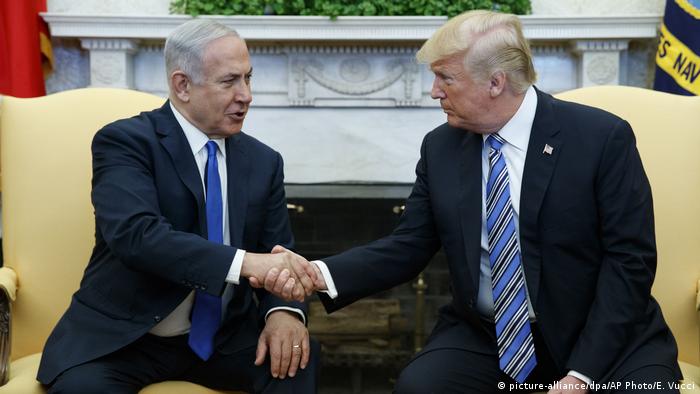 US President Donald Trump on Monday said he might travel to Israel to attend the opening ceremony of a new US Embassy in Jerusalem.

Trump made the statement during a meeting with Israeli Prime Minister Benjamin Netanyahu in the Oval Office.

Netanyahu heralded Trump's decision to move the US embassy to Jerusalem.

"This will be remembered by our people through the ages," Netanyahu said during brief remarks.

Trump's push to modify or scrap Iran's 2015 nuclear deal and concerns over Tehran's growing foothold in Syria featured prominently during the talks.

"If I had to say what is our greatest challenge in the Middle East to both our countries, to our Arab neighbors, it’s encapsulated in one word: Iran," Netanyahu said. "Iran must be stopped. That is our common challenge."

Netanyahu is in Washington for the annual conference of AIPAC, the powerful pro-Israel lobby, and is due to speak at the conference later in the week.

The meeting also provides a chance for Netanyahu to steer away from corruption investigations in Israel and towards his biggest foreign policy priority, combatting Iran.

Israel has expressed concern over Trump's pledge to dismantle the 2015 Iran nuclear deal, with one key concern being the possibility that the US might accept Iran's increasing presence in Syria and influence in Lebanon, two Israeli neighbors.

European countries have been hesitant about the possibility of medium-range missile restrictions, arguing that existing UN resolutions on Iran only focus on longer-range projectiles.

US officials negotiating with Britain, France and Germany seem to agree with the Europeans, which has caused Israel concern.

US peace efforts 'slap of the century'

Trump's controversial decision to recognize Jerusalem as Israel's capital has outraged Palestinians, who see Jerusalem as the capital of their future state.

Trump's long-awaited peace plan is yet to be completed and even so, Palestinian President Mahmoud Abbas has called for an end to the United States' usual role as mediator between Israel and Palestine.

In another confidence blow to the plan, Jared Kushner, Trump's son-in-law who is behind the proposal, is under scrutiny over his business dealings as special counsel Robert Mueller plows ahead with his Russia probe. Indeed, Kushner has had his White House security clearance stripped back.

In January, Abbas described Trump's peace efforts for the Middle East and Jerusalem as the "slap of the century" and confirmed reports that the US had proposed the Jerusalem suburb of Abu Dis to the Palestinians as an alternative capital of a future state.

"Our eternal capital is Jerusalem, and we will not accept what is being offered to us to make Abu Dis the capital of Palestine instead of the city of Jerusalem," Abbas said.