Donald Trump has reached for a tried-and-tested means to win reelection in the face of falling popularity. But he hasn’t declared war on foreign countries. He’s declared war on his own people, says DW’s Ines Pohl. 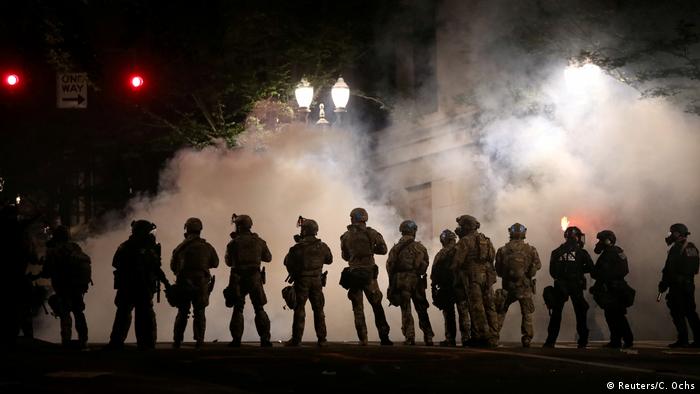 Things haven't been looking good for Donald Trump — COVID-19 has America in its grips, more and more people are becoming infected and the country's morgues are filled beyond capacity. Semis with refrigerated trailers to keep bodies cool in the summer heat have become a regular sight at the nation's hospitals.

Still, the president has aimlessly insisted that he bears no responsibility, going so far as to suggest citizens inject themselves with disinfectant and, until very recently, even made fun of the idea of wearing face masks. That behavior not only angered his opponents, support within his own Republican party is also beginning to show cracks.

With each horrifying new COVID-19 report his challenger in the upcoming presidential election, Democrat Joe Biden, has gained more and more ground. Now he leads Trump by double-digits in a number of opinion polls.

Even Donald Trump, who sees the world as it suits him, has apparently realized the economy will not recover by November. Quite the opposite in fact — with each passing day, the scale of economic devastation becomes more obvious for all to see, and there is no way the Trump administration can pump enough money into the system to hold off the worst until after election day.

Ultimately, his mantra of claiming, "This is all China's fault," will not be enough for him to win support at the ballot box.

Foment violence and play the knight in shining armor

Other presidents, with George W. Bush being only the most recent example, have started wars in similar straits — wars unite the country and wartime presidents get reelected.

But Donald Trump has chosen a different path. He has taken every possible opportunity to turn the uncertainty many Americans now feel into fear. He perfidiously exploits the fissures that have existed in American society from the beginning, further fracturing the country.

With no concern for the grave consequences of his actions, he continues to stoke violence in order to later present himself as some kind of savior. He is doing so with the same political tactics that won him the White House in 2016. For Trump, it is always "the others" who pose the threat; "the others" who are to blame; and "the others" whom he, the strongman, has to protect his supporters from.

It is a very simple plan. Still, it seems to work in a country that has clearly lost its inner compass. And it certainly works with those who have traded in their American dream for anger, especially in a world in which the US role as the leading superpower is diminishing. And that message is also being clearly transported by the images that Trump is currently using to flood television screens in his most recent political coup.

An accidental declaration of war

In a first step, anonymous troops were sent to protect statues. Trump issued a decree in June, allowing federal police to be deployed in cities witnessing ongoing protests against police brutality and the discrimination of Black people. Then, in a speech commemorating US Independence Day, he declared war on the "left-wing mob," who were supposedly tarnishing America's glorious history. Indeed, media footage of clashes at Portland's protests really did conjure up images of war. Things were worse than in Afghanistan, he recently said in the Oval Office. These tactics seem to resonate with Trump's supporters.

US mayors and governors had not even requested this "support" from Washington. They know too well, after all, that federal agents in camouflage gear won't help calm protesters but will provoke further clashes. They do not want to see anonymous agents beating up protesters and dragging them off to their vehicles. But Trump relishes such images.

And he wants to see more of them. He sees them as his last shot at getting reelected.

Violence on US streets, provoking counterviolence to deliver the pictures he needs so he can try to come to the rescue. Dispatching more federal agents will certainly help serve his goals.