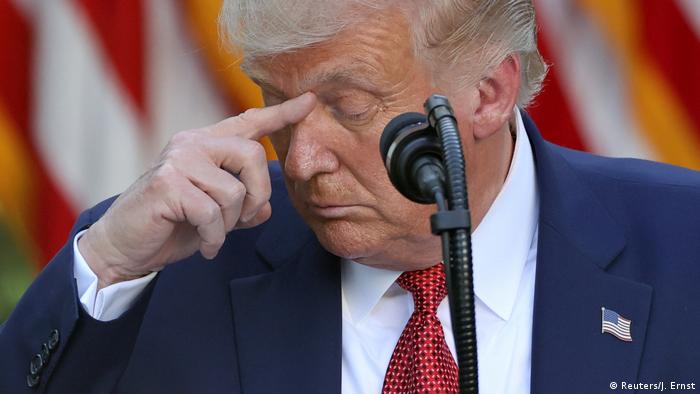 When asked if he would accept the results of the 2020 election, US President Donald Trump said he was "not going to just say yes" or no.

"I have to see," he told Fox News moderator Chris Wallace in an interview that aired on Sunday.

"I'm not going to just say yes. I'm not going to say no, and I didn't last time either," the president added, referring to a similar statement he made before winning the 2016 race.

Trump also said he was not "a good loser."

"I think mail-in voting is going to rig the election, I really do," he told Fox.

Polls show Trump trailing behind Democratic rival Joe Biden, including a survey by ABC News and The Washington Post that on Sunday put Trump 10% behind Biden among likely voters.

When pressed on the issue of voter popularity, Trump said he was "not losing, because those are fake polls."

The Biden campaign responded to Trump by saying that the election would be decided by the American people. Trump lost the popular vote in the 2016 election by nearly 3 million votes but won more states and electoral votes.

"And the United States government is perfectly capable of escorting trespassers out of the White House," the Biden campaign added.

During the pre-recorded interview, Trump also accused Biden of wanting to defund the police, and — when this claim was challenged as false by the interviewer — ordered an aide to bring him the document supporting the accusation. After receiving the document, the president was unable to locate the wording he believed would prove him right.

COVID-19: 'They have the sniffles'

When asked about the coronavirus pandemic, Trump said the increased testing in the United States was the only reason for the growth in cases. When this was disputed by the host, who pointed out that more and more people were now testing positive on average, Trump said many of them were "young people that would heal in a day."

"They have the sniffles and we put it down as a test…many of those cases shouldn't even be cases," Trump said.

The president also described the country's top expert on infectious diseases, Anthony Fauci, as "a little bit of an alarmist."

During the hour-long interview, which marked the president's first news interview in over a year, Trump was also pressed on his repeated statements expressing hope that coronavirus would simply disappear.

"I will be right eventually," Trump said. "I'll say it again, it's going to disappear," adding that he has "been right probably more than anyone else."

The US leads the globe on both the number of the coronavirus patients and the COVID-19 fatalities, with over 3,744,000 reported cases and over 140,000 lives lost to the pandemic.

The US House committee presented new findings tying former President Donald Trump to the attack on the Capitol.