US President Trump has said he has a "great relationship" with Philippine President Rodrigo Duterte as the two met at a regional summit in Manila. The meeting got off to a rocky start with a group handshake gone awry. 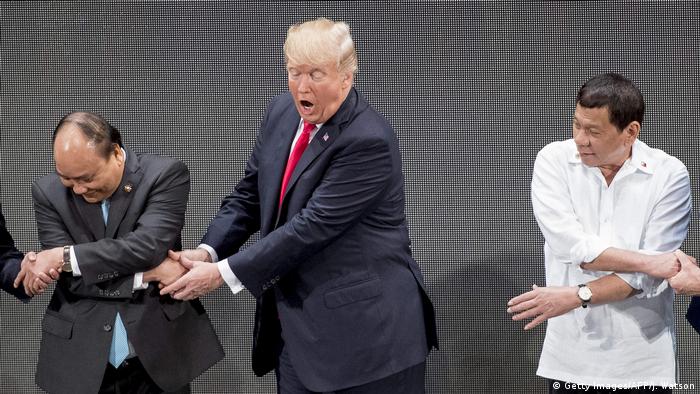 US President Donald Trump praised Philippine President Rodrigo Duterte on Monday after the two met on the sidelines of an international summit in Manila.

Trump told reporters that he and Duterte have "a great relationship" and that he has "really enjoyed" being in the Philippines for the annual Association of South-East Asian Nations (ASEAN) summit.

The White House and Duterte's spokesman gave conflicting accounts on whether the two discussed human rights issues in the meeting.

"Human rights briefly came up in the context of the Philippines' fight against illegal drugs," said White House spokeswoman Sarah Sanders. She added that the two also discussed the fight against the so-called "Islamic State" (IS) and narcotics.

However, Duterte's spokesman said that Trump did not raise any human rights concerns during the 40-minute meeting.

The Philippine leader explained his anti-drug policy at length to Trump who "seemed to be appreciative of his efforts," spokesman Harry Roque said.

Duterte has been criticized internationally for his war on drugs in which thousands of people have been killed, some of whom in extrajudicial killings. Trump has previously praised Duterte for his handling of the Philippines' drug problems.

The opening ceremonies for the ASEAN conference began with elaborate pageantry featuring the leaders of 10-member association, which includes Thailand, Vietnam, Indonesia, Malaysia, the Philippines, Singapore, Myanmar, Cambodia, Laos and Brunei. Leaders from China, Canada, the US, Russia, Japan, South Korea, Australia and New Zealand were also attending the summits.

Read more: Why is the United States interested in the 'Indo-Pacific'?

Trump fumbled when it came to a carefully choreographed group photo with ASEAN leaders. The leaders were supposed to cross their arms to shake the hands of those standing next to them. 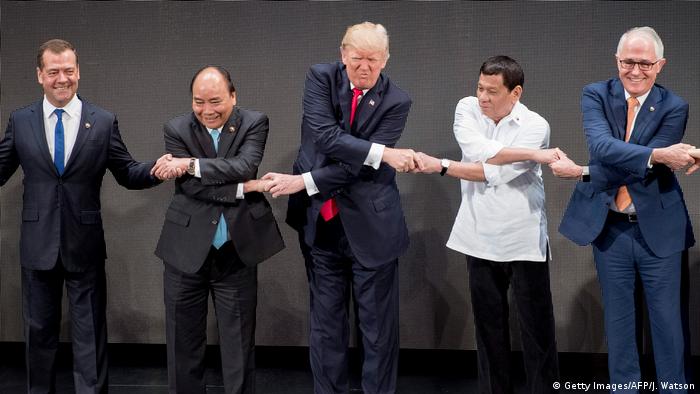 The instructions appeared to briefly confuse the US President, who used both of his hands to clasp the outstretched hand of Vietnam's Prime Minister Nguyen Xuan Phuc — leaving Duterte with a spare hand.

Trump then laughed when he realized his error, grimacing as he reached to shake hands with both Nguyen and Duterte.

The "ASEAN handshake" photo is supposed to represent unity among the leaders.

Police in Manila used water cannon on around 1,000 demonstrators who were marching just a few kilometers away from the venue where Duterte, Trump and other Pacific allies were meeting. 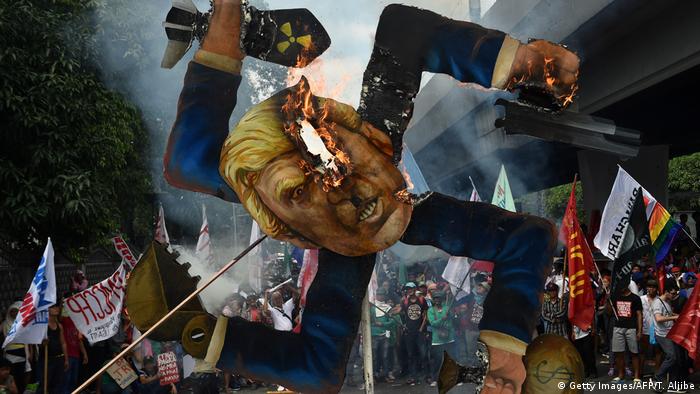 Hundreds of leftist activists, students and farmers burned a swastika-shaped effigy of Trump, shouting anti-US slogans demanding that US troops leave the Philippines.

The swastika effigy symbolized "fascism, war and plunder," Renato Reyes Jr., the secretary-general of one of the groups that organized the protests, said on Twitter.

Anti-riot police said 16 people were injured in the demonstration when protesters clashed with around 500 police officers.

The namesake son of an ousted dictator had secured a landslide victory. His running mate and daughter of the outgoing president, Rodrigo Duterte, Sara Duterte, was sworn in days earlier.