Germany is presenting a united front as host nation for soccer's World Cup. But just as the country remains divided socially and economically between east and west, German soccer is also split along similar lines. 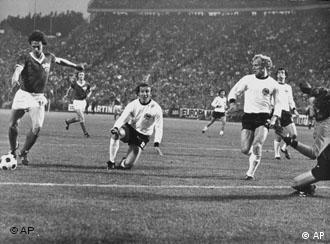 Since East beat West 1-0 in 1974, Germany's soccer divide has grown

When the World Cup kicks off in Germany next summer, the eyes of the world will turn to the host nation.

If everything goes to plan, the FIFA 2006 World Cup in Germany will be more than just a spectacle of soccer; it will be seen as an example of Germany's organizational prowess and a message to the world of what the once-divided nation can achieve now that east and west have been reunited.

Beyond the fanfares and flags, however, there's another reality. Germany's eastern and western regions are still far apart socially and economically and in some eyes, soccer has become a metaphor for the failure of the united Germany.

Just as eastern business and industry have suffered since the fall of the Berlin Wall, so have the region's soccer clubs. East cannot match west. In the unified Germany, where money governs professional sports, eastern teams have sunk without sponsors and investment.

When Hansa Rostock was relegated on the final day of last season, it left the Bundesliga’s top flight without any eastern representation. In the first full domestic season after unification, Hansa and Dynamo Dresden were launched into the top league of the Bundesliga and six others into the second division. Things have changed radically since the 1991 campaign. There are now no eastern teams in the first division and only four in the second.

Once a proud and dominant team in the GDR, Dynamo Dresden has since dropped out of the professional game and those teams who survive find their finances slashed, unable to attract top-quality players. The TV budget for the Bundesliga has been slashed by 60 percent and the majority of the money generated gets shared out among the top clubs -- all from the west -- in the first division. The rest is thrown like scraps to the teams in the second division. Beyond that, it's every team for itself.

Just as unification led to a mass exodus of workers from the east to the west in the early 1990's, many soccer players from the GDR headed for the more fashionable and lucrative western clubs. 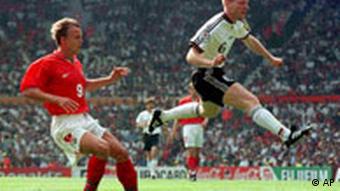 Matthias Sammer was the first player from the former GDR to play for the unified Germany team.

The GDR production line, built on intensive technical and physical training, was so proficient that after unification, some 500 players joined western clubs. By the mid-1990s, players like Matthias Sammer (photo, right), Jens Jeremies, Carsten Jancker and Alexander Zickler had formed the backbone of the national team.

"Soccer was a great tool for celebrating the successes of eastern-bloc politics back in the days of the GDR," said Kirk Schmidt, author of "OstKurve," a study on the history of soccer in East Germany.

"The state ensured that the young players were given the best training possible in the hope that their successes would bring glory," he said. "This backfired when the communist regime fell. The east had all these great players who then headed for the west and when the clubs found themselves losing money, they cashed in on anyone just to stay afloat."

But now the well of sought-after soccer players in the east is now running dry. That is not due to any lack of talent but rather because of a lack of financial support for youth programs and sports schools that, under the old communist regime, ensured talented youngsters would train twice a day, two hours at a time, and play regularly. 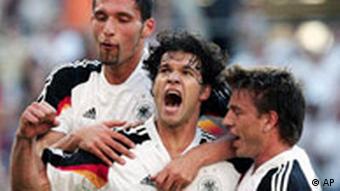 "The funding just dried up after 1990," Schmidt said. "That's why the Bundesliga and the national team have so few prominent eastern players. People like (Bayern Munich's) Michael Ballack and (Bayer Leverkusen's) Bernd Schneider were already on their way by then. Others weren't so lucky. The old GDR education system was allowed to decay." 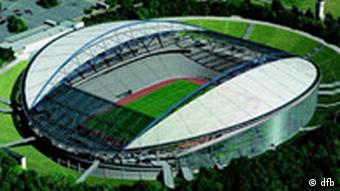 Leipzig will have a new stadium for the 2006 World Cup after coming up with the necessary money to be awarded Host City status.

Such is the poor condition of some eastern cities' finances that some -- including Dresden, the state capital of Saxony -- which applied for World Cup 2006 Host City status failed to conform to World Cup directives set out by FIFA, world soccer's governing body, in areas such as transport facilities and overall infrastructure. As a result, out of the 12 host cities featuring games during the championships, only two of those are in the east of the country -- Berlin and Leipzig. That is despite attempts "to keep a geographical balance," according to David Noemi from Germany’s World Cup Organizing Committee.

Fifteen years after reunification, questions are still being asked whether Germany is working as a unified country or not. In German soccer the answer is fairly clear. There may be no physical walls between them anymore but a divide certainly remains between east and west when it comes to all aspects of the beautiful game.

The plight of soccer in eastern Germany is worsening with each day. Former German international Lothar Matthäus wants to help the cause of clubs from the former GDR. (May 20, 2005)

All the latest from the FIFA 2006 World Cup in Germany.