More crossing points on divided Cyprus are to be opened and electricity networks unified, according to UN advisor Espen Barth Eide. This follows talks between the island's Greek and Turkish leaders. 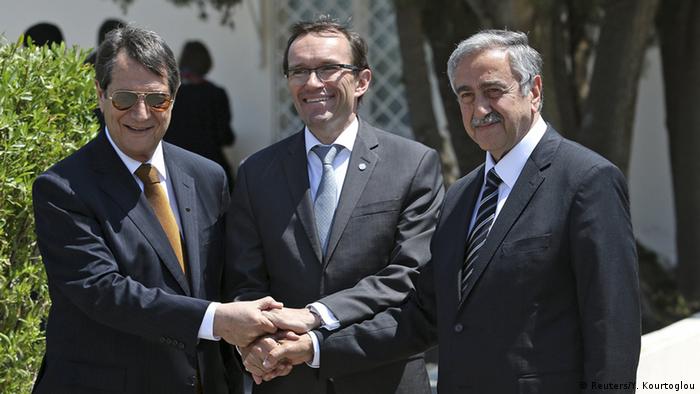 A long-awaited resumption of Cypriot peace talks produced more signs of conciliation on Thursday as the Greek and Turkish Cypriot leaders held this month's second encounter.

The Mediterranean island was divided along ethnic lines in 1974 when Turkey invaded the northern part of Cyprus after a coup in Nicosia seeking to reunite island with Greece.

The two leaders opened the new round on peace talks on May 15 by drinking coffee together and strolling through Nicosia.

Initial crossing points along the UN-patrolled 180-kilometer (110-mile) ceasefire line were opened in 2003. Thursday's move should allow easier movement of people and communication between the communities.

A UN-brokered reunification blueprint -spearheaded by star diplomat Kofi Annan - was rejected by Greek Cypriots but approved by Turkish Cypriots in simultaneous referenda in 2004.

The European Union admitted southern Cyprus as an EU member in that year. Turkish Cypriots were left without membership benefits.

Turkish Cypriot leaders formally declared a breakaway state in 1983 but it was only recognized by Ankara, which supported it financially and militarily.

A reunification deal would likely create a two-state federation, one Greek Cypriot and the other Turkish Cypriot.

Talks have in the past foundered on the competencies of each, the redrawing of territorial boundaries and property claims by tens of thousands of internally-displaced people.