Though Noam Chomsky has made his name as arguably the foremost political dissident of the last half a century, his intellectual legacy is firstly as a linguist. At the age of 90, he continues to talk the talk. 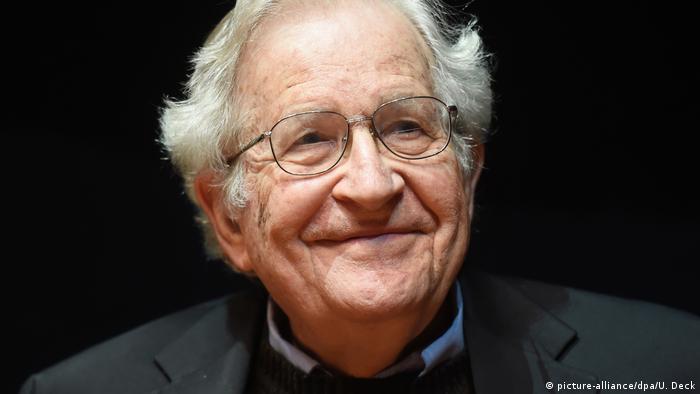 Born on December 7, 1928, Noam Chomsky was raised by Ashkenazi Jewish immigrants in Philadelphia.

Though his father was a Hebrew scholar who studied medieval grammar, Chomsky lacked direction through school and university and only committed to the study of linguistics when he took up a post at the Massachusetts Institute of Technology (MIT) in 1955.

It wasn't long, however, before the young unknown scholar single-handedly revolutionized the field of linguists, his book Syntactic Structures (1957) kickstarting his concept of "transformational grammar" that argued — contrary to the behaviorist fad of the time — that our linguistic capacity is genetic and innate.

Having since been dubbed "the father of modern linguistics," the long-time Institute Professor Emeritus at MIT and author of 100-odd books further made his name for his deconstruction of language in the public realm, and the way words have helped wage war and consolidate political power.

Inspired by anarchist and socialist writers like George Orwell, in the 1960s Chomsky became involved in the anti-Vietnam War movement, not only as an intellectual critic, but as a participant in direct "activism and resistance," as he called it in a 2003 interview.

"For years, every time I came to Washington, the first thought that came to mind was the smell of teargas, I was in and out of demonstrations, in and out of jail a number of times," he said, adding that he went to jail in 1967 alongside the writer Norman Mailer. 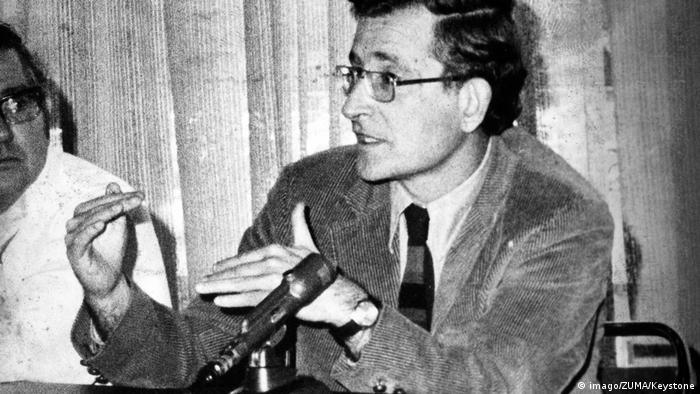 In 1969, Chomsky published his first political tract, American Power and the New Mandarins, which was a stinging indictment of the Vietnam War and US imperialism.

Many similarly themed books and essay collections would follow, including 1983's Fateful Triangle, which explored the relationship between the US, Israel and Palestine as the source of the ongoing Middle East conflict.

Yet while the darling of the global anti-imperialist left, Chomsky has faced sustained criticism for whitewashing the genocide committed by the communist Khmer Rouge in Cambodia. 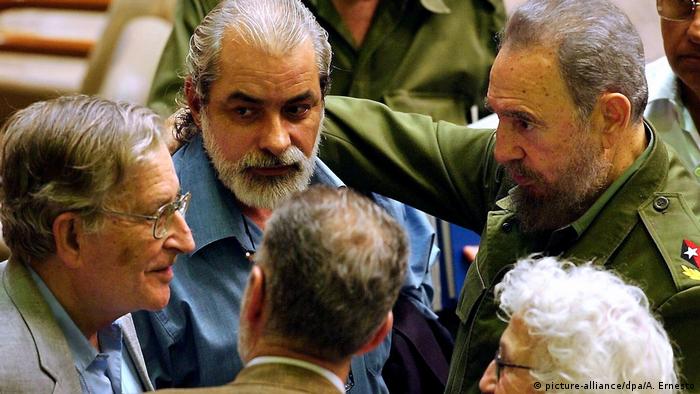 "What filters through to the American public is a seriously distorted version of the evidence available, emphasizing alleged Khmer Rouge atrocities and downplaying or ignoring the crucial US role, direct and indirect," wrote Chomsky in The Nation about the unfolding horror in Cambodia.

Chomsky has also been criticized for refusing to call the 1995 Srebrenica Massacre in Bosnia a genocide, again focusing instead on alleged US war crimes that he says have never been held to account. "[It's] certainly a horror story and major crime, but to call it "genocide" so cheapens the word," he told English journalist George Monbiot in 2011 of the Srebrenica Massacre.

Despite such controversies, Chomsky has remained one of the world's foremost public intellectuals throughout his eighties, a tireless advocates for peace (lately in Yemen), human rights, economic equality and climate justice via constant public speaking and media appearances. He has also been an outspoken supporter of the work of Wikileaks and Julian Assange. 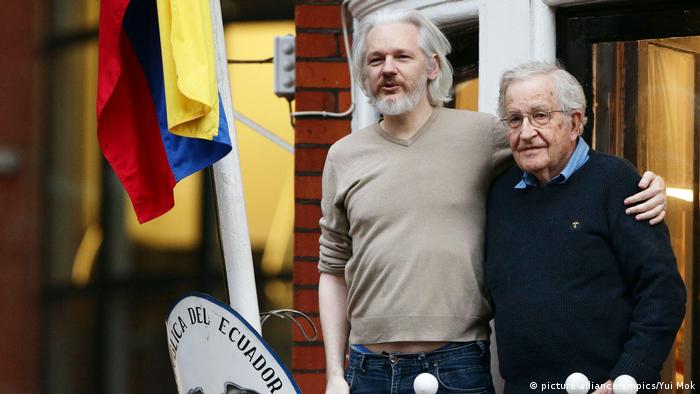 Noam Chomsky (right) with Julian Assange (left) on the balcony of the Ecuadorian Embassy in Knightsbridge, London in 2014, two years after the Wikileaks founder went into exile in the embassy

"An intellectual and moral teacher and inspiration the likes of which one rarely encounters in the human record," said left news site Counterpunch on the eve of Chomksy's 90th birthday.

The publication contrasted the thinker's legacy with that of the recently deceased George H. W. Bush, of whom Chomsky was a major critic — primarily for invading Iraq during the 1990 Gulf War, and for Bush's invasion of Panama to overthrow Manuel Noriega the year before.

Though the dissident intellectual has been a fierce opponent of US imperialism under both major political parties in America, in 2017 he called the Republican Party "the most dangerous organization in human history" for its consistent rejection of the science of climate change.

"Has there ever been an organization in human history that is dedicated, with such commitment, to the destruction of organized human life on Earth?" he said in an interview with Amy Goodman of the Democracy Now news program after President Trump pulled the US out of the Paris climate agreement.

While nonagenarian Chomsky might no longer be protesting on the front lines, his words have not lost their impact.

The existence of an indictment against WikiLeaks founder Julian Assange has been revealed, apparently inadvertently. The nature of the charges remains unknown. (16.11.2018)

Manuel Antonio Noriega, the military strongman who took power in Panama in 1983 and was removed by US forces six years later, has died in Panama City. He was 83. (30.05.2017)

Conditions have been met for Julian Assange to leave Ecuador's embassy in London. Britain has guaranteed that the WikiLeaks founder would not be extradited to any country where his life would be in danger. (07.12.2018)