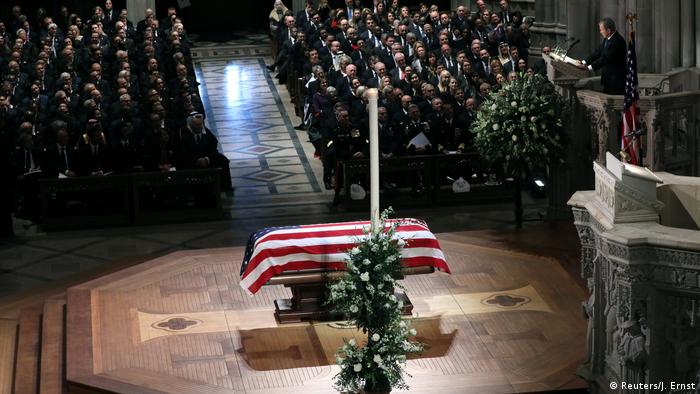 For once, political Washington seemed to hark back to its traditional ways. For about two hours on this frigid December morning all living presidents gathered to honor one of their own at the city's National Cathedral. Foreign dignitaries including the current and former leaders of key United States allies, such as German Chancellor Angela Merkel and former Canadian Prime Minister Brian Mulroney, were not only present but, in the case of Mulroney, who gave a eulogy, played a significant role in the proceedings.

And the fact that President Donald Trump was invited this time — unlike at the memorial service held for Republican Senator John McCain three months ago at the very same place, where he was persona non grata — speaks to the character of George H.W. Bush and his family, who planned the event. The late President Bush and his family wanted this to be a moment where the nation comes together to remember and honor the service of one its leaders and where the current political strife, party affiliations and deep divisions that plague this country are put aside, albeit for just a few hours. They chose to do this despite the fact that Bush previously had made no secret of his disdain for Trump and his brand of politics.

It succeeded partially, at the superficial level. While the fact that all living presidents were present and none of the eulogists made any overt references to Trump and the toxic political climate he has fueled and continues to fuel must already be counted as a success, it nevertheless cannot cloak the deep political gulf and the divergent character between Bush and the current office holder.

That gulf was never addressed explicitly at the funeral service. It did not have to be, because it is implicit when recounting key aspects of Bush's life, character and presidency. One of the best examples was his support for German unification at a time when many other international leaders were reluctant or openly opposed to it.

What made Bush's backing of German unification particularly poignant was that he himself had served as a soldier and nearly lost his life in World War II. And while the fall of the Berlin Wall, the peaceful end of the Cold War and German unification often seem inevitable in hindsight, they weren't. Just imagine how things could have turned out with the current US president at the helm during that crucial period of history. Bush supported Germany's unification because he believed the country had successfully grappled with its past and because he believed in the strength and endurance of its democracy.

Bush even offered the united country a unique "partnership in leadership" role alongside the US, something Germans could not really grasp back then and probably still can't today. Bush, the last US president of the World War II generation, arguably was an outlier. While his successors — until the current one — all considered Germany an important partner and ally, because of his role in German unification his bond with Germany runs deeper. Bush really was a true friend of Germany.

Bush is often considered a successful president when it comes to foreign policy, but he can also boast domestic achievements. He signed the Americans with Disabilities Act, which outlawed discrimination against people with disabilities. Working with a Democratic Congress, Bush defied his own campaign pledge and his Republican Party and reached a deal to raise taxes in an effort to control the ballooning budget.

That move probably cost him his re-election, but it was later seen as a crucial first step towards economic responsibility. And after his election defeat against Bill Clinton, he formed close personal ties to his successor and his wife, Hillary Clinton, who were by that time already loathed by most Republicans.

Those traits seem nostalgic, almost quaint today when "winning" against the other side at all costs is what matters in politics.

All of this is not to say that Bush's record was unblemished. It wasn't. There are many aspects of his presidency that are deeply controversial, among them the use of a racist campaign ad, the invasion of Panama, his response to the AIDS crisis or his pardoning of people involved in the Iran-Contra affair.

Nevertheless, Bush was arguably the last US president who was accepted by most Americans, regardless of party affiliation, as "their" president. That's why his passing and his legacy truly mark a watershed moment in history, not just for Germany, but for the US as well.