Dispute over Malta′s cold shoulder for refugees | Europe | News and current affairs from around the continent | DW | 14.07.2013

The Mediterranean island nation of Malta is the first destination for many refugees. Malta has been criticized by the EU for its efforts to keep the refugees out, but the rest of the EU may be part of the problem. Recently, authorities in Malta were planning on sending a group of African refugees straight back to their country of departure, Libya, as soon as they arrived in Malta without checking for any possible asylum claims. Only a last-minute decision from the European Court of Human Rights prevented them from doing so.

The Maltese government was warned by the court that they were in violation of EU and international law if they denied refugees on Maltese soil the possibility of an asylum application. The court was also clear that preventing refugees from being sent back immediately did not mean they had a right to stay.

'Asylum is a right, not a privilege'

In the meantime, eleven Maltese aid organizations have taken a stand against the deportations in a joint statement, saying "the threat of torture and inhumane treatment faces migrants who are sent back. It would also be a blatant violation of our international legal responsibilities." 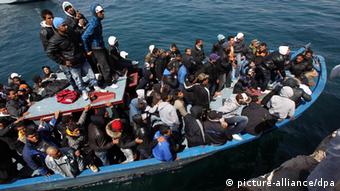 Refugees risk their lives on the dangerous crossing to Europe

The organizations add that the sub-Saharan African refugees would have faced a difficult life had they remained in Libya. But those who attempt to go to Europe and are sent back face an even harsher reality.

Nadja Hirsch, a member of European Parliament from the Free Democratic Party, agrees that it is unacceptable to deny refugees the right to apply for asylum by swiftly deporting them. It's also in violation of the law.

"I don't understand why in our community of values, intervention by the Court of Human Rights is necessary to tell member states that asylum is a right and not a privilege," Hirsch said.

The effects of Dublin II

Despite arguments of people like Hirsch, the situation remains difficult in Malta. The Maltese Prime Minister Joseph Muscat bows to the will of the court, but has also spoken of a "national interest" to put a stop to the flood of refugees. Muscat also takes issue with the lack of support from the other EU countries. He's negotiating with the President of the European Council, Herman Van Rompuy, and the Libyan government to decide on the next steps.

But they won't get past the basic problem, which stems from an act known as Dublin II. This resolution, agreed upon by EU interior ministers in 2003, states that refugees must apply for asylum in the land where they entered the EU. That means they are not allowed to travel on to other EU countries. Certain countries are affected more than others simply due to their geographic location. Italy and Greece are examples, but so is the tiny island-nation of Malta, which is not far from the African coast.

The high concentration of refugees in certain countries is the main point of contention. The FDP's Hirsch says there needs to be a "fundamental change" to develop an EU "allocation formula."

"Then Malta wouldn't have to rely only on itself, because asylum seekers would be spread out among all member nations based on their populations and economic strength," Hirsch said.

Rebecca Harms, a Green politician in the European Parliament, takes things a step further than "fair sharing" between asylum seekers among EU nations. In an interview with German public broadcaster SWR on Friday (12.07.2013), Harms called for people who are in need to have the possibility to simply come to Europe.

"Many people who have the right to asylum don't even make it to Europe," Harms said, adding that European countries were implementing "cold-hearted policies."

The aid organizations in Malta are referring to a "litmus test" for the country: 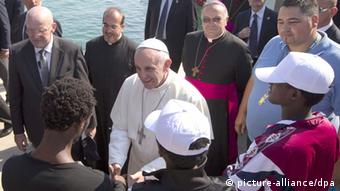 "We have to resist the attempt to only focus on our 'national interest,'" the groups said, adding a reminder of Pope Francis's recent visit to the nearby Italian island of Lampedusa, where he called for solidarity with the refugees.

Attempts to change the Dublin II Act have all failed so far. Countries that aren't as affected (such as Germany) have no interest in changing the norm because it would mean an influx of refugees, and the burden of processing their asylum applications.

Even cooperation on the subject between the EU and countries such as Libya focus on preventing people from getting underway toward Europe in the first place.

Residents of Berlin are fighting a new home for asylum seekers with xenophobic rhetoric, while refugees in Munich are staging hunger strikes. Both sides of the asylum debate are becoming more vocal in their protests. (13.07.2013)

UN test: Shacks instead of tents

While refugee camps offer tents as dwellings, the United Nations teamed up with Swedish furniture giant Ikea to find more durable alternatives. A new kind of shelter is being tested in Ethiopia. (13.07.2013)