Over the course of history, Aachen has gained a reputation by transforming itself from an ancient city of power into a modern hub of education. DW's Eesha Kheny checked it out for us. 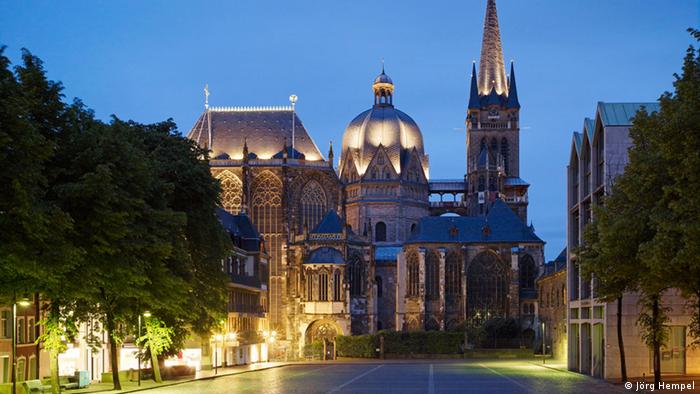 Located in the state of North Rhine-Westphalia, Aachen is Germany's westernmost city. Well-known for its architecture, markets and spas, it had been on my to-do-list for a long time. Finally, as the train drew closer, my curiosity was piqued and I was certain that there were some surprises in store.

This year Aachen Cathedral is celebrating 40 years since it was named a UNESCO World Heritage Site, making it the first in Germany, back in 1978. It is most famous for having been built on the orders of Emperor Charlemagne – also known as King Charles the Great – during his lifetime, and it has also served as his resting place since his death in 814. Expecting to see a grand, yet fairly standard, cathedral, I was pleasantly surprised by the real deal. The mix of Gothic, Ottonian and Carolingian architecture gave the cathedral a captivating look inside and out. 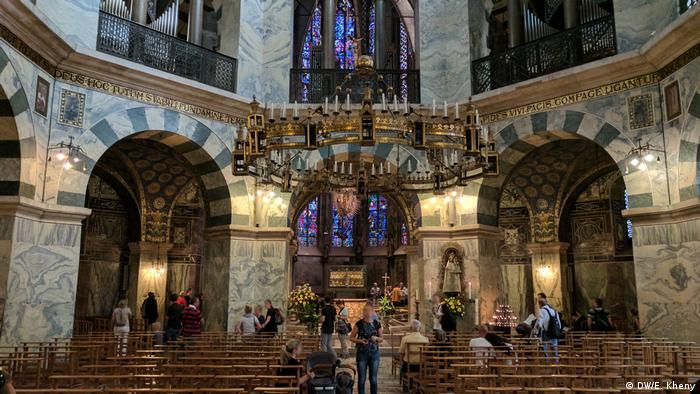 Inside the Aachen Cathedral

My favorite was the Palatine Chapel ordered by Charlemagne himself. Marble stone pillars with gold and blue mosaics adorned every inch of the high octagonal room. Although there was a lot going on, the Carolingian harmony was indisputable. From every angle, the one thing I couldn't help but notice was the stunning four-meter-wide golden Barbarossa chandelier hanging from the roof of the Palatine Chapel. It was donated by Emperor Frederick I after canonizing Charlemagne in 1165.

The importance of the cathedral is further magnified by it having been the coronation venue until 1531 for 31 German kings and 12 queens. I looked around, from the marble patterned floor to the deeply embellished ceiling, trying to imagine just how elaborate those coronations must have been. Even today, the marble coronation throne is housed here. 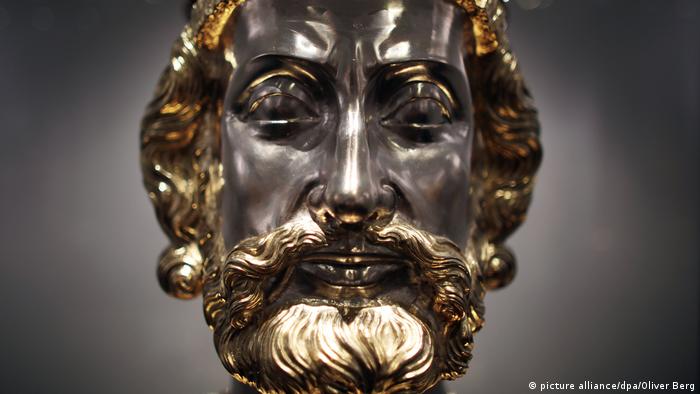 What began simply as a vision of Charlemagne, Aachen Cathedral is now considered as an important pilgrimage church. Since 1349, every seven years faithful devotees from all over the world gather for the Aachen Pilgrimage known as "Heiligtumsfahrt," during which the holy relics – usually stored in St. Mary's shrine are displayed. These include what is thought to be the robe Mary wore the night Jesus was born as well as the loincloth worn by Jesus on the cross. With such a valuable past and remarkable architecture, the cathedral has rightfully earned its place as the first UNESCO World Heritage Site in Germany. 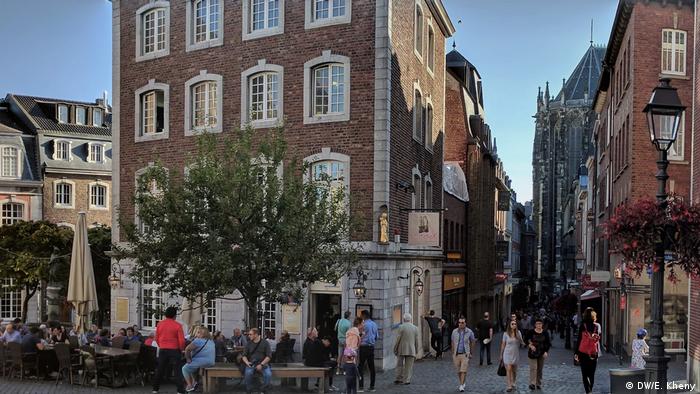 The city is marked with a prominent old town, full of traditional bars, whimsical fountains and local shops selling the locally-produced Aachener Printen. I tasted these spicy flavored cookies which reminded me of gingerbread. Buying a few packets as gifts for friends and family, I continued on with my exploration. One of the highlights in the area is the 'Fountain of Puppets,' a bronze installation featuring movable characters, depicting the history of Aachen. Interestingly, this is only one of many fountains spread across the city. 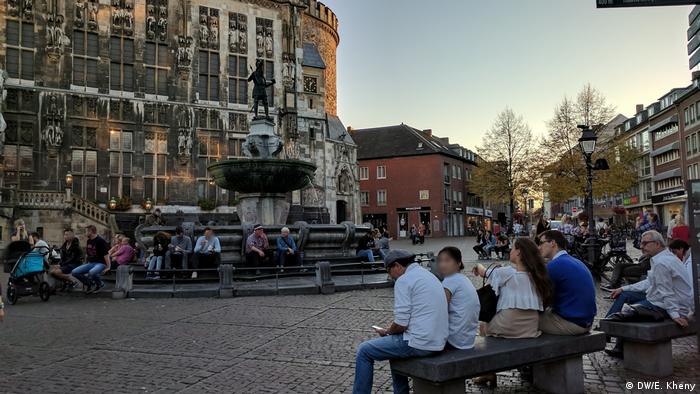 Following the narrow alleys, I found my way to the main Market Square which is flanked on one side with Aachen Town Hall. Open to the public since 2009, the town hall stands on the very foundation of Charlemagne's King's Hall. The further I ascended the staircase, the more the imposing gothic exterior and street noise was left behind. On entering the Coronation Hall, I found it empty, because of the lateness of the hour, and in its deserted state appearing bigger than usual. While the replicas of imperial jewels are definite crowd-pleasers, the descriptive frescoes painted by artist Alfred Rethel give insight into the life of Charlemagne. From the glass windows, I gazed out at Aachen Cathedral, wondering if Charlemagne had done the same as he governed over his beloved capital city. In those times, this location was a seat of power which even today serves as the office of the mayor and the city council of Aachen. 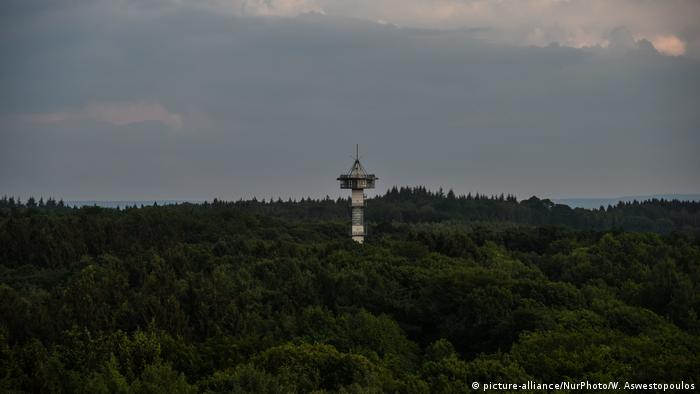 Observation tower at the Three-Country-Point (Belgium, Germany and the Netherlands)

With summer swiftly fading away and autumn creeping in, there was a slight chill in the air. Nevertheless, I joined lots of other people, mainly students, in the outdoor cafes and restaurants. Aachen University, founded in 1870, is the largest technical university in Germany and renowned worldwide. With thousands of students, it has put Aachen on the map as a student-friendly city.

On the recommendation of one such student I caught a bus to the 'Dreiländerpunkt,' or Three-Country-Point as it would be called in English. It is a meeting point of the German, Belgian and Dutch borders located on Vaalserberg, which at 322 meters (1057 ft.) is the highest mountain of the Netherlands. A short bus ride to Vaals, located 5.3 kilometers (3.2 miles) from Aachen, brought me to the border. From here, I hiked for approximately four kilometers to reach the 34 meter-high Balduin Observation Tower located on top of the Vaalserberg. The viewing terrace of the tower is accessible by a glass elevator for an entry fee of four euros ($4.65). On a clear day, the 360-degree panoramic view can stretch all the way to Maastricht in Holland, High Venn in Belgium and the Eifel in Germany. Unfortunately the cloudy sky was disrupting my view, but it could not affect my enthusiasm nor that of others. 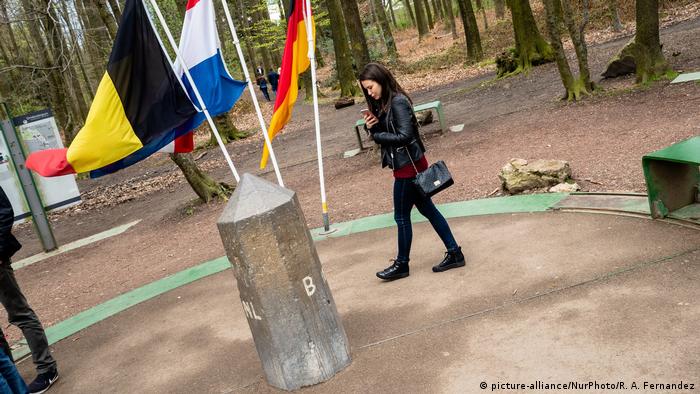 This is where the borders of Belgium, Germany and the Netherlands meet

This point is a popular attraction, usually crowded with tourists and families. While adults love the idea of standing in three countries at once, children enjoy the play area with its labyrinth and other fun activities. As for me, with three countries in sight and new travel plans in mind, I bade Aachen goodbye, hoping to return in the winter to explore its Christmas markets and thermal springs, which are what attracted the ancient Celts and Romans to Aachen long before it became Charlemagne's capital city.