German citizen Mesale Tolu has been in custody in Turkey for almost eight months. Her trial has resumed in Istanbul, with prosecutors demanding her release. Julia Hahn reports from Istanbul. 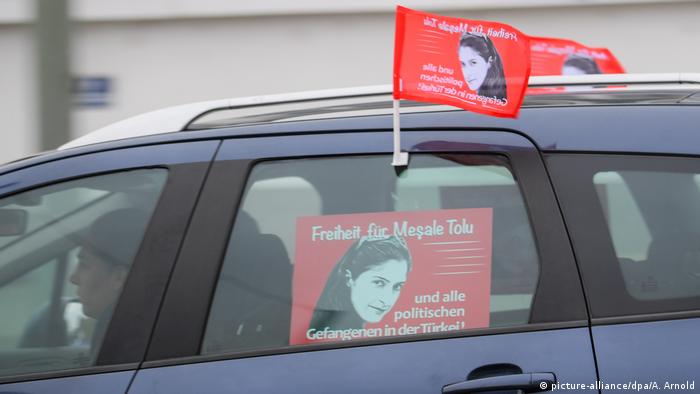 Case files are stacked up in Kader Tonc's office: File after file, each detailing the fate of one of the hundreds of clients represented by this small Istanbul law firm – including Mesale Tolu.

Tolu is a German journalist and translator who has been in custody in Turkey for 33 weeks now. Like many other prisoners there, including Deniz Yücel, a correspondent for Germany's Die Welt newspaper, she stands accused of producing "terrorist propaganda."

"Mesale is brave and optimistic. The accusations against her are baseless, and we are going to prove it," says Kader Tonc. The young lawyer has just returned from visiting Tolu in prison, where the two women went over their defense strategy one last time.

On Monday, the trial of Tolu and 17 other accused resumed in Istanbul's Caglayan Palace, the largest court building in Europe. Prosecutors demanded Tolu's and five other defendants' release, according to observers in court. Reporters are not allowed in the courtroom.

This case is particularly explosive in that Tolu was born in the southwestern German town of Ulm and only has German citizenship, after refusing Turkish citizenship 10 years ago.

'No proof' to support accusations of terrorism

According to the bill of indictment, the 33-year-old journalist, who was in Istanbul working for a left-wing news agency, not only produced terrorist propaganda but was a "member of a terrorist organization" — Turkey's left-wing extremist Marxist-Leninist Communist Party (MLKP). An anonymous witness is said to have observed Tolu participating in actions organized by the group. Photos also exist of Tolu at a memorial service for a Kurdish YPG militiawoman who was killed fighting in Syria. If Tolu is convicted, she could face up to 20 years in prison.

Her lawyer, Kader Tonc, believes the trial is politically motivated. "There are all sorts of accusations, but no proof," she says. "We hope that this supposed witness actually appears in court this time, so we can finally have a chance to question him." Tonc says there is currently no legal basis for keeping Tolu behind bars any longer. 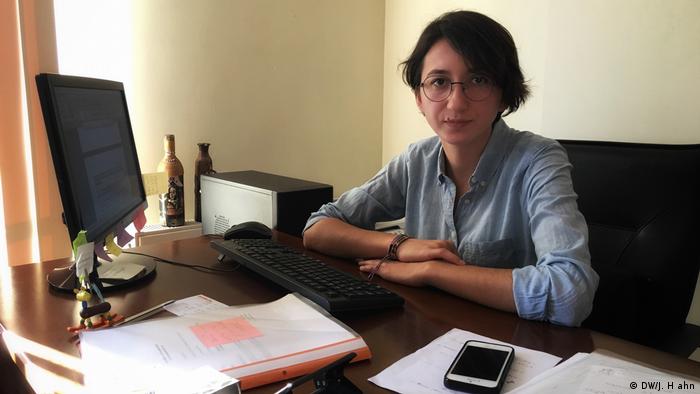 Imprisoned with her young son

The Tolu case is also a family drama. The journalist has been in the women's prison of Bakirkoy since her arrest at the end of April – and until a few weeks ago her 3-year-old son Serkan was there with her. Tolu didn't want him to grow up without his mother, so she decided to take him with her into her cell. Serkan is now living with Tolu's sister in Germany and coming to Turkey for brief visits. He'll be in Istanbul for the start of the trial on Monday, waiting for his mother. "Of course she misses her son," says Kader Tonc. "But prison is no place for a small child, long-term."

Until recently the boy's father, Suat Corlu, was also in prison in Istanbul charged with terrorism. He was provisionally released at the end of November. DW approached him to speak about his wife's case, but he declined to comment at the present time.

The German government is demanding the release of Tolu along with at least nine other Germans who are still in prison in Turkey for what are judged to be political reasons. The Turkish president, Recep Tayyip Erdogan, has announced that he is prepared to release German prisoners, if, in return, Germany hands over Turkish citizens Istanbul alleges were involved in the attempted coup in 2016. The German government has answered that it cannot be blackmailed. The proceedings resume Monday at Caglayan court in Istanbul

Away from the political stage, one of Tolu's former teachers in Germany has called for her release, and more than 80,000 people have already signed an online petition to this effect. "Actions like these are very encouraging for Mesale," says her lawyer. "She gets a lot of postcards and letters in prison, including from people she doesn't even know. She's very happy about that; it gives her strength."

On the first day of the trial in October, Mesale Tolu asked to be acquitted. "I have not committed any of the crimes of which I am accused, and have no connections with illegal organizations,” she said. But while many of those accused alongside her have been provisionally released, Tolu is still behind bars.

Kader Tonc hopes that this time Tolu will also be released, but she's not sure what the outcome will be. "In a constitutional state you're innocent until proven guilty," she says. "It's different here in Turkey. Here, the accused is guilty until able to prove his innocence."

Turkey has expressed frustration at Germany's lack of movement on extradition requests after a failed coup. A German lawmaker said Berlin should "exert resistance" to instead get German citizens out of Turkish custody. (23.10.2017)