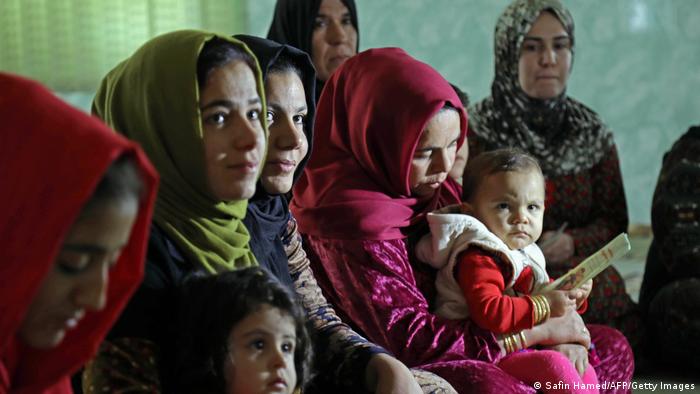 Anti-FGM efforts in northern Iraq had success, but in Egypt the prevalence remains high

A new study by the Cairo-based Tadwein Center for Gender Studies has found that that 86% of underprivileged women aged 18 to 35 in Egypt, a country of more than 102 million people, have been subject to female genital mutilation (FGM), also called female genital cutting (FGC).

That is only down one percentage point from the FGM figures in Egypt's last National Health Survey, in 2014.

"I was in shock when I saw how little has changed, given that Egypt vowed to end FGM by 2030," Habiba Abdelaal, fellow of the Tahrir Institute for Middle East Policy and a researcher of sexual and gender-based violence in Egypt, told DW.

The practice is still rife despite Egypt's outlawing FGM in 2008, increasing jail sentences for practitioners and family members involved, and setting up the National Committee for the Eradication of FGM in 2019.

Though the prevalence of FGM in certain populations in Egypt has hardly changed since 2014, the researchers told DW that there have been other shifts.

"Two things have changed for the better since 2014," said Amel Fahmy, director of the Tadwein Center and co-author of the study. "Only 38.5% of women and 58% of men support the continuation of FGM."

That marks a significant drop in favorable views among women in particular. Previously support for FGM had been about 50% for women.

"The second change is that daughters of circumcised women continue to be less likely to be circumcised, at around 57.4%," Fahmy said.

Still, those numbers  reveal that almost half of the girls born in Egypt are still at risk of undergoing genital mutilation. The UN states that any form of "FGM is a human rights violation and constitutes a form of violence against women and girls."

'A medical reason' for FGM

Typically the removal of all or part of the external genitalia is carried out on girls aged between 9 and 13, but there are victims as young as 6, campaigners against FGM say.

The practice is often carried out in the name of promoting chastity and upholding tradition. Some see it as a religious duty. However, the most popular is a "medical" reason.

The medicalization of FGM is widespread in Egypt, as reflected in responses the 2014 Demographics and Health Survey: 37.9% of mothers — compared with 81.9% of daughters — had had the procedure performed by licensed medical professionals.

Midwives and traditional cutters had previously performed the procedure.

According to the WHO, there are different stages of the partial or total removal of external genitalia in FGM

"Some perpetrator doctors claim there is a medical reason for the cutting, which is nothing but a leeway for lawyers to close the case," Abdelaal said.

That is a view shared by Mona Eltahawy, an Egyptian-born activist and fierce campaigner against FGM. "There is no such thing as a medical reason to cut a girl's clitoris, clitoral tissue, labia and to sew the vagina together," she told DW.

Eltahawy said she remembered more than one conversation with "women who themselves were subject to FGM, who have sworn to me that they will cut their daughters despite whatever law is in place."

This is partially motivated by perceived duties of love and care, Eltahawy said: "They do it to their daughters and their granddaughters because they love them, because they don't want them to be rejected or ostracized — they want them to survive."

Eltahawy said another reason for the prevalence is that "FGM is part of a systemic patriarchy and systemic misogyny as it is interwoven with the obsession of keeping a girl's virginity until they get married."

For that reason, Eltahawy said, it is not simply up to individual mothers to pledge not to permit their daughters to bu subjected to FGM.

Thirty percent of respondents to the Tadwein study said they would not allow a son or hypothetical son to marry a noncircumcised woman.

The German-Iraqi NGO WADI has been successfully working since 2004 with women in the Kurdish areas in northern Iraq to fight the practice.

Back then, the region used to be among the places with the world's highest prevalence of FGM.

"We've been working with women only, and the success is immense," Arvid Vormann, project coordinator at WADI, told DW.

The organization's approach is to send teams of two female social workers into villages. "Depending on the varying levels of openness, we literally started by explaining that FGM is outdated," Vormann said.

In the beginning it was tougher, and social workers were often attacked for opposing cutting.

In 2011, all forms of FGM were officially banned in Iraq, though enforcement remains as low as in Egypt.

For women, the NGO's long-term commitment has paid off as mindsets have changed: Mothers don't have their daughters cut, and men embrace women who are not circumcised. Also, WADI-trained midwives have to vow that they won't cut baby girls.

"But our work doesn't end here, as many women who live with FGM still need advice," Vormann said DW. WADI's social workers now focus on helping circumcised women with psychological support and hands-on information, such as using lubricants to reduce friction during intercourse.

Including men in the conversation

Activists say Egypt will need a broader-society effort to lower the high rate of FGM.

"It's a crime against women, and it's a crime happening to women — and we're still holding women accountable to fix it," Abdelaal said.

She said men would need to join the conversation. "We are living in a male-dominated society after all," she said.

But men will also need to listen. "FGM will not end in Egypt until and unless we are finally over this taboo of women's autonomy, over their bodies of sexual openness," Eltahawy said. "And that will require a sexual revolution in which we say I own my body and it is my right to experience pleasure."

Fahmy fears that an end to FGM will not occur within the next generation.

"FGM is closely linked to education," Fahmy said. "And, while education levels among girls are increasing, progress would need to be 15 times faster to end FGM by 2030."