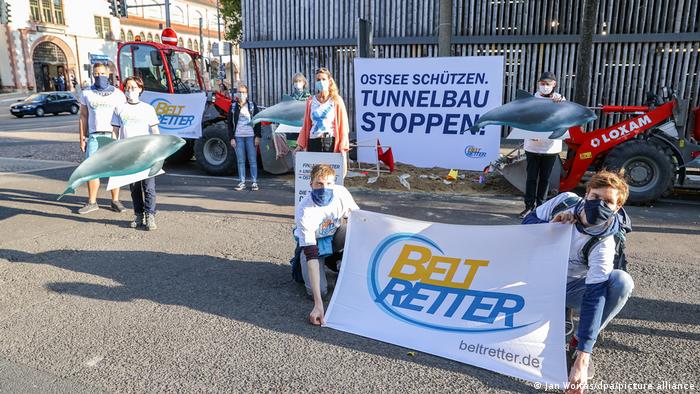 Germany's Federal Administrative Court on Tuesday opened a case listening to arguments about the building of a road tunnel between Denmark and Germany.

The environmental group "Beltretter" (Belt Savior) is calling for a halt to the project, which would link the Danish island of Lolland with the German island of Fehmarn.

The court in Leipzig is set to hear objections from two environmental groups, as well as several ferry companies that operate across the stretch of water known as the Fehmarn Belt.

The environmental organizations say the project poses a danger to marine and birdlife, while sea crossing operators say the change would lead to job losses.

Representatives of the Beltretter group were outside the court building with a mock-up beach scene and signs demanding an end to the project.

"Incorrect traffic forecasts, incorrect calculation of costs, downplayed environmental damage, deficiencies in planning. Those in politics have been hoodwinked by this Danish tunnel project and we hope that the court will look at it with more precision," said Beltretter spokeswoman Karin Neumann.

Seven days have been scheduled for the hearings. They will be followed with a second round in October that will hear arguments from the town of Fehmarn, as well as a local farmer. A decision is expected at the end of the year.

The hearings have been moved from the courthouse to the Leipzig Congress Hall so that the necessary social distancing required under coronavirus restrictions can be kept in place.

The Fehmarn Belt tunnel would stretch some 18 kilometers (about 11 miles) from the town of Puttgarden in Germany to Rodby on Lolland.

A treaty on a fixed link across the belt of water in the western Baltic Sea was agreed between Germany and Denmark in 2008.

While Denmark bears the costs for the planning, construction and operation of the tunnel on its own, Germany has committed itself to improving road and rail connections to Puttgarden.

The Danish firm working on the project has estimated the costs at €7.1 billion ($8.3 billion). Permission for the project was granted in Denmark in 2015, and theGerman parliament approved the tunnel in 2009.