Defense calls for acquittal of Syrian on trial for torture | Germany | News and in-depth reporting from Berlin and beyond | DW | 21.02.2021

Defense calls for acquittal of Syrian on trial for torture

In a watershed trial in Germany, a Syrian national stands accused of crimes against humanity committed in Damascus a decade ago. His defense argues that he would have put his own life at risk had he ignored orders. 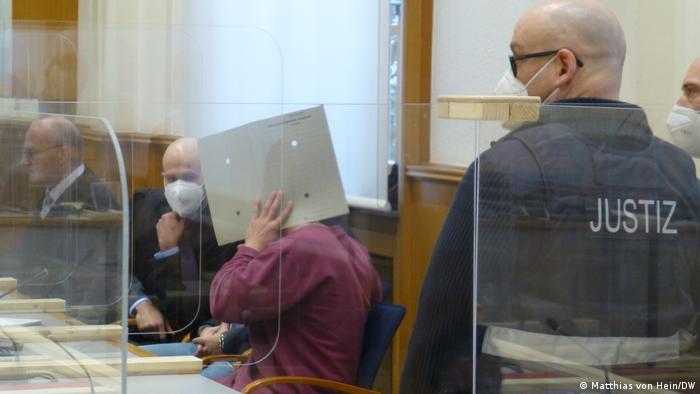 Was Eyad A. a witness rather than a perpetrator?

On the final day of his trial, Eyad A.* wipes away his tears. He is clearly moved. His defense attorneys have tried to make the case that he had no choice but to obey orders from his superiors in Syria's intelligence service a decade ago in Damascus. The alternative was not only to risk his own life but also the lives of his family. The legal term is "necessity as a defense." Eyad hopes that it will lead to his acquittal on Wednesday.

The landmark trial, which began in April 2020, has seen German prosecutors pursue charges in a German court against a Syrian accused of torturing and murdering other Syrians in Syria. It is based on the International Criminal Code and the "principle of international jurisdiction," which enables the German legal system to rule on crimes against humanity even if they were not committed in Germany and Germans were neither perpetrators nor victims.

Eyad is charged with bringing at least 30 protesters to the Damascus prison for torture in autumn 2011.

During 60 days of trial, the cruelty, ruthlessness and brutality of Syria's regime were documented in almost unbearable detail through the testimony of countless witnesses, as well as legal and forensic experts. In their final pleas, state prosecutors spoke of killing and torture on an "almost industrial scale."

Those same prosecutors have also been at pains to emphasize that the horror in Syria is ongoing, that the Assad regime has been able to tighten its grip on power and that even in Koblenz the influence of the regime can be felt: Some witnesses have only been willing to submit anonymous testimony. Others have been insulted and threatened on social media. One had to be put under witness protection. Others heard that family members in Syria had been intimidated.

Eyad comes from a poor rural area of eastern Syria where he struggled to make a living. In the mid-1990s, he joined the intelligence service, initially as a sports instructor. He did not make it any further than the rank of sergeant.

He had — against his will, as he insists — been transferred to a security unit called Branch 40. The man in charge was Hafez Makhlouf, a cousin of Syrian ruler Bashar Assad, and the unit had a reputation for thuggery of the worst kind.

In September or October 2011, Eyad was, he said, ordered to take part in an operation to break up a demonstration. Hafez Makhlouf himself had turned up at the scene of the protest in a Mercedes jeep and opened fire on the demonstrators with an assault rifle. He shouted: "If you love your president, shoot the traitors," and called on others to take aim at the protesters. Eyad said he tried to stay calm and did not open fire. He added that it was the moment when he knew that the time had come to desert.

In the eyes of the prosecution, Eyad went from being a witness to becoming a suspect. After the shooting was over, Eyad and his colleagues combed the streets of the area for fleeing protesters. They arrested at least 30 people, who were all taken to Branch 251 in Damascus. The bullying and abuse of those people began during the journey and continued after arrival at what was also known as Al-Khatib or "Hell on Earth" prison.

Eyad fled Syria in 2013 and then needed five years to make his way to Germany, where he applied for asylum.  He made no secret of his past ties with Syria's intelligence service. Months later, he got a call from an official at the BKA, Germany's Federal Criminal Police Office, to be questioned as a witness.

Since 2011, another key German government agency, the Public Prosecutor General, had been collecting evidence of crimes committed by the Syrian state. Eyad provided the BKA official with extensive information: more than 30 pages, including a chilling report on how he had clearly heard the screams of torture victims in the Branch 251 cafeteria.

His testimony helped build a case against Anwar R., a former intelligence service colonel, and the second defendant in the trial.

Anwar — himself a trained lawyer — is also facing charges of crimes against humanity in Koblenz. The horrific deeds he is charged with are of a very different scope, so his case was separated from that of Eyad, and his verdict is expected later this year.

After deserting the intelligence service, he was viewed as a potential source of valuable information. He joined the opposition and managed to get hold of a visa that enabled him to travel with no apparent difficulty from Jordan to Germany, where he was immediately granted asylum.

Despite the large amount of witness testimony, the prosecutors have little concrete evidence against Eyad apart from his own statements. And there are other legal issues: Because Eyad A. was initially questioned as a witness and not as a suspect, he was not properly informed of his rights. That in turn triggered a dispute over the usability of the statements he made to the court.

What is clear is that his defense attorneys made much in their final plea of Eyad's willingness to deliver testimony. They also pointed out that it was in the first instance his cooperation that led to Anwar's arrest.

And, despite his detailed description of the Syrian system of oppression, state prosecutors emphasized their belief that Eyad could not be made to stand in court as a representative of the regime. Judgment would and should only be passed on his actions alone. The prosecutors maintain that, without people like him, the system would not have worked.

The state prosecutors say Eyad could indeed have disobeyed the orders of his superiors. They are pushing for a prison sentence of five and a half years. But, as the trial draws to a close, there is one thing that everybody shares: "massive respect" for the selfless courage of those torture victims who were willing to appear as witnesses.

Victims of Syrian state torture are taking the stand in a Koblenz courtroom, in the world's first case of its kind. Many Syrians have been waiting for this moment and are hoping for justice.