Declining terror attacks: Why Bangladesh can′t afford to be complacent | Asia | An in-depth look at news from across the continent | DW | 09.07.2018

Declining terror attacks: Why Bangladesh can't afford to be complacent

There hasn't been any major terrorist attack in Bangladesh for the past few months. The government wants to take the credit, but security experts warn it could be the lull before the storm. M Abul Kalam Azad reports. 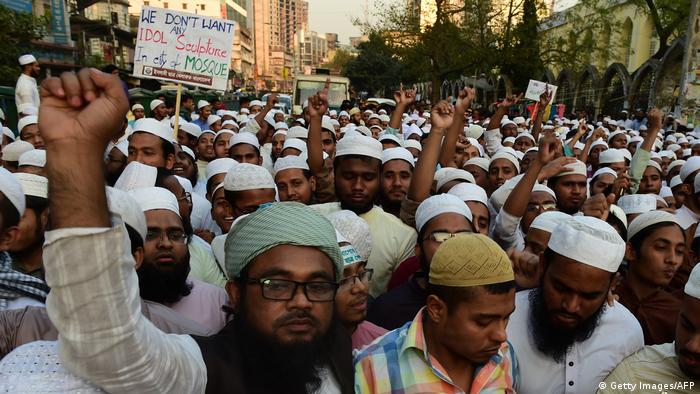 Bangladesh remains susceptible to religious extremism even though terrorist attacks appear to have declined in the past two years.

Experts say that the government's main focus has been on a quick-fix strategy to curb terrorism whereas it has not paid attention to the need for a holistic de-radicalization program.

Following a surge in terror attacks in 2013, the government adopted the strategy of using brute force to snuff out attacks. Since the July 2016 terrorist assault at Dhaka's Holey Artisan Bakery, at least 79 suspected radicals have been killed and over 150 others arrested in an aggressive anti-militancy crackdown.

A lull in terror attacks in the past two years has given Prime Minister Sheikh Hasina's government a false sense of calm, say analysts.

"The government is largely relying on the use of force, but it cannot tackle religious extremism with this strategy," A N M Muniruzzaman, a retired military official and security analyst, told DW.

Counterterrorism experts say a resurgence of militancy is almost a certainty if the government doesn't take measures to tackle growing Islamist radicalization in the country.

Al Qaeda-linked Ansar al-Islam and "Islamic State"-linked Jamaatul Mujahideen Bangladesh (JMB) have carried out most terrorist attacks in Bangladesh since February 2013. The recent activities of these jihadist groups signal their resurgence, a police official in Dhaka told DW on condition of anonymity. The official cited a failed attack on a liberal writer in March and the murder of a secular publisher in June as proof of his claims.

"The government is seeking short-term solutions and is avoiding a long-term strategy, ignoring the radicalization processes, thus allowing these organizations to regroup," Muniruzzaman said.

"We can't win the battle against religious extremism without addressing the factors that breed radicalism," he added.

Ali Riaz, an expert on South Asian politics and political Islam, shares this view: "Bangladesh is still vulnerable to militancy because of the presence of both the drivers [of radicalism] and an enabling environment," he told DW.

Riaz said that social alienation, sympathy for transnational extremist groups, a sense of victimhood as a part of the global Muslim community, are some of the driving factors behind Islamist radicalization in Bangladesh. The use of extremist rhetoric in mainstream politics and society, impunity to jihadists and an absence of democratic space are the enabling factors, the expert added.

Security analyst Muniruzzaman is of the view that the use of religious narrativesby political parties, particularly the ruling Awami League, is one of the major reasons behind a sustained radical thought in the South Asian country. He said that the government's "unwritten alliance" with the radical Hefazat-e-Islam group is an example of a "nexus between the government and radicals."

"The government's actions are aimed at short-term electoral benefits," said Muniruzzaman, adding that they will have a long-term impact on society, something the state will not be able to undo in the future.

"The key message these extremist groups spread through the internet is the importance of establishing a caliphate in Bangladesh," Tanvir Hasan Joha, who monitors radicalism on the internet, told DW.

Run up to elections

Bangladesh is just months away from parliamentary elections. Experts fear the militant groups could unleash terror in the run-up to the vote, scheduled to be held between October 31 and December 31.

Monirul Islam, the head of Bangladesh Police's counterterrorism unit, believes that "complacency" at this time could be dangerous.

"If radical groups are not launching major terrorist attacks, it does not mean they're not operating," Islam told DW.

"We were successful in dealing with it on a tactical level. But the strategic part, which is countering extremism on all fronts by involving all stakeholders, needs more efforts," he added.

Read more: Bangladesh blogger: the wrath of a father demanding justice for his son's murder