Debate over adoption rights for homosexuals heats up | Germany| News and in-depth reporting from Berlin and beyond | DW | 24.07.2009

Conservative politicians across Germany have lashed out at Justice Minister Brigitte Zypries' repeated demand that laws be changed to give homosexual couples the right to adopt children. 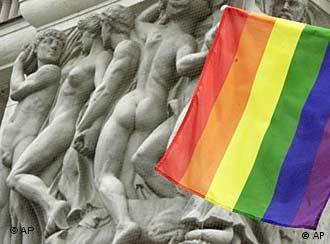 Christine Haderthauer, the minister for social affairs in the state of Bavaria, rejected the idea, telling the German daily Passauer Neue Presse that the goal of the adoption process is to find children an optimal family, and not the other way around.

Haderthauer was not the only one giving interviews to newspapers following Thursday's announcement. Wolfgang Bosbach, deputy head of the Christian Democrats (CDU) parliamentary group, sharply criticized the justice minister's demand.

"It has always been our belief that children are best off being raised by a man and a woman," he told the Ruhr Nachrichten, adding that there was no reason for them, not even when it came to adoption rights, to make civil unions equal to traditional marriages.

When heterosexual couples in Germany tie the knot, they get married. When homosexual couples go to the justice of the peace, they enter into civil unions. What may seem to be a word game has far-reaching consequences.

As it is, gays and lesbians are allowed to adopt children in Germany, but only as individuals, not as a couple. That right is reserved for married couples, which means homosexuals, even if they have a civil union, are often passed over by agencies looking to place children in stable, loving homes.

Zypries doesn't think that's the way it should be, joining gay rights activists in their fight to change the law.

"There is no reason for the government to treat heterosexual relationships any differently from homosexual couples," Zypries said on Thursday in Berlin.

Zypries is a member of the Social Democratic Party (SPD) and the issue of gay rights has been top of her agenda for months, putting her at loggerheads with her conservative CDU coalition partners.

Conservatives have argued that children of homosexual couples suffer from discrimination, but a new study commissioned by the Justice Ministry seems to disprove that.

According to the study, which was conducted by a research group at the University of Bamberg, 6600 children in Germany are growing up in what are known as "rainbow families". But, contrary to popular belief, the majority of these children - 53 percent - said they were not discriminated against due to their parents' sexual orientation. The study found that the children did not miss a second-sex parent, neither mother nor father, and that same-sex parents didn't have an effect on their sexual identity.

"The children had very strong ties to their gender roles," said Marina Rupp, head of the research group that interviewed over one thousand gay parents and some 123 of their children.

Justice Minister Zypries says this refutes Conservative arguments in which children's well-being has been pitted against same-sex couples' right to family.

"The study proves that when children are raised in a loving family, they grow up well and secure, and gain the self-confidence they need to deal with the world at hand. The question of whether they have two male parents, two female parents or heterosexual parents is irrelevant," Zypries said in a radio interview with the German national broadcaster Deutschlandfunk.

In order for homosexual couples to be able to adopt children, Germany would have to ratify the new European Adoption Agreement, which allows people in civil unions and common law marriages to adopt.

German Justice Minister Brigitte Zypries has repeated her call for a change to laws to allow same-sex couples to adopt children, on the heels of a new study of family life in homosexual households. (23.07.2009)