A mother and child have reportedly been killed in a fire at a refugee center on Lesbos, according to Greek media. Police fired tear gas at migrants rioting over the slow response to the blaze. 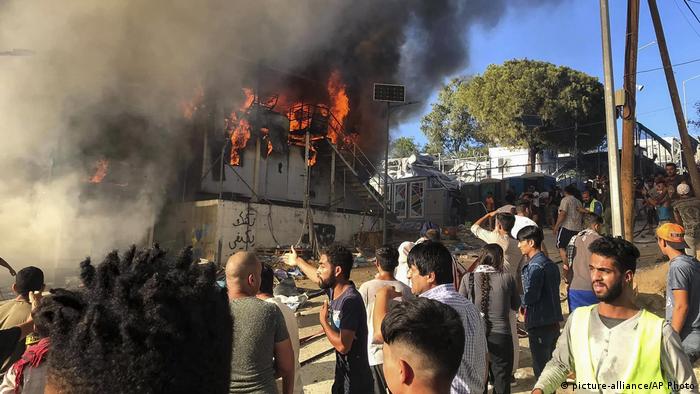 At least two people have died in a fire that blazed through the Moria refugee camp on the Greek island of Lesbos.

Greek media has reported that a woman and a child were killed in a burning container inside a crowded refugee camp on the eastern Greek island, which lies close to Turkey. The fire spread to six or seven containers. The total number of fatalities is currently unknown.

Two fires broke out early Sunday evening, one inside the Moria detention center and another at a nearby temporary camp. The cause of the fire is still unconfirmed.

An airplane was able to extinguish the flames. Police then fired tear gas to control a rioting crowd angered by how long it took to put out the blaze.

"The situation is tense," Lesbos Mayor Stratis Kytelis told The Associated Press. "There is information about a dead mother and her child. We haven't been able to confirm that yet."

UNHCR Greece later appeared to confirm the deaths on Twitter.

Greek Deputy Minister of Citizen Protection Lefteris Economou is due to visit the site later Monday with the chief of police and the secretary general for migration policy.

About 12,000 migrants, most of them from Afghanistan, are housed in the Moria migrant camp which has a maximum capacity of 3,000 people.

Lesbos was a key gateway into Europe for almost a million migrants in 2015 and still suffers from severe overcrowding as the Greek government continues to grapple with solutions to the refugee influx.

Tension has recently surged on the Greek islands, with the number of migrants arriving from Turkey rising sharply since last year.

The aid agency Doctors Without Borders warned that Lesbos was "reaching breaking point," saying that some 500 new people were entering the island every week, overstretching health care and other migrant services, while leading some to resort to violence.

There has also been an increase in far-right attacks on migrants in Lesbos.