Germany's interior minister has retracted statements he made about Sharia law in reference to church asylum. In a radio interview, he had said nothing, not even Sharia, stood above German law. 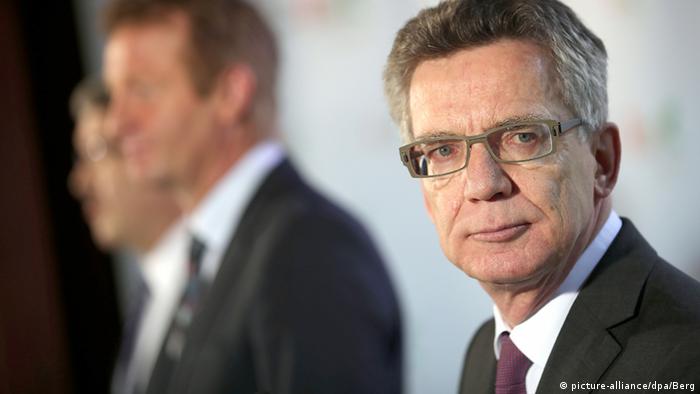 In an interview to be published in full in the Thursday edition of Die Welt newpaper, German Interior Minister Thomas de Maiziere, a Christian Democrat (CDU), retracted the comparison he made to Sharia law in the discussion about church sanctuary, or what is referred to as "church asylum" in Germany.

"I would like to take back the Sharia comparison, though I was partially misunderstood here," the minister said. He added that he "as a Christian," he was in favor of church sanctuary so long as the refugees were re-entered into the asylum-seeking process at one point.

"Under these conditions, I do not have the intent of stopping church sanctuary," he said.

In an interview with Die Welt, the CDU-linked Konrad Adenauer Foundation said on Tuesday, February 24, that it wanted to distance itself from the minister's comments. It pointed out that of Germany's over 200,000 asylum seekers in 2014, if 500 of them were taking refuge at churches, this was still a "relatively small number."

CDU General Secretary Peter Tauber also distanced himself from the Sharia comments: "I would not compare these two things."

In an interview with the German national public broadcaster Deutschlandfunk (DLF) on February 8, he strongly criticized the practice of church sanctuary, which dates back to medieval times in Europe.

"We have legislation that regulates residency and stipulates in which cases residency is denied. If there is a case where there is a legally-recognized decision, recognized by the courts, to end residency for someone, then no one has the right - not even the church - to go and say, 'I see it differently.' That is my opinion as a minister of the constitution." De Maiziere added though, that "as a Christian," he noted some individual cases in which justice could be "tempered with mercy."

"But we are now talking about hundreds of cases in which there has been a systematic hindrance of transfers according to Dublin," de Maiziere said, referring to the "Dublin III Convention," which sets rules for asylum seekers in the EU, notably that they must apply for asylum in the first member state they reach. "And that is misuse of church asylum."

What caused an uproar, however, was his comparison to Sharia law, which he says has been taken out of context. In the same interview, de Maiziere said: "it's not acceptable for any institution" to place itself above the law. "I want to use a different kind of example here: Sharia law is also a type of law for Muslims, but under no circumstances can it stand above German law. I believe that is obvious. But I still believe, that, as I said before, in isolated cases where it is about showing mercy … even a federal minister must somehow show compassion. But using formal appeals and hundreds of cases, that's taking it too far."

Conflict in many areas of the world, along with economic difficulties in Eastern Europe has seen a dramatic increase in the number of refugees coming to Europe over the past year, especially from Syria and Iraq. In addition, Germany has seen a dramatic increase of the number of asylum seekers from Albanian Kosovars fleeing economic disaster at home. This increase has been partly caused by the German government's move to designate Kosovo a "safe" country, meaning that all asylum requests that are unable to prove exceptional circumstances are automatically rejected, a response to the influx of requests from other parts of the world.

Germany last week introduced new, fast-track procedures to speed up application processing - to deport them more quickly, as critics have pointed out.

Some of the refugees are now turning to churches as a last resort. According to a recent report released by Germany's federal ecumenical working group, there are currently 266 cases of church asylum granted to 411 people; at the same time last year, there were only 34 cases.

According to the website of the organization "Asyl in der Kirche" (asylum in the church), church asylum is "a form of temporary protection for refugees without the status of legal residence who would face unacceptable hardship, torture or even death if forced to return to their country of origin." It also adds, "Church asylum does not rely on any legal norms other than those of the German constitution and international law. It is, however, based on the assumption that decisions by state actors in individual cases can overlook or even break fundamental legal norms."

Amid ongoing discussions over tightening restrictions on church asylum, representatives from the state and churches met in Berlin on Tuesday for talks. These took place "in a very constructive atmosphere," according to Martin Dutzmann, the official representative for Germany's main protestant church, the EKD. "I hope by the end of the week, we can come to a solution that is acceptable for both sides."