Germany's main stock market index has exceeded the psychologically important 10,000-point threshold for the first time today. At the same time, the Euro fell on the back of a rate cut by the European Central Bank. 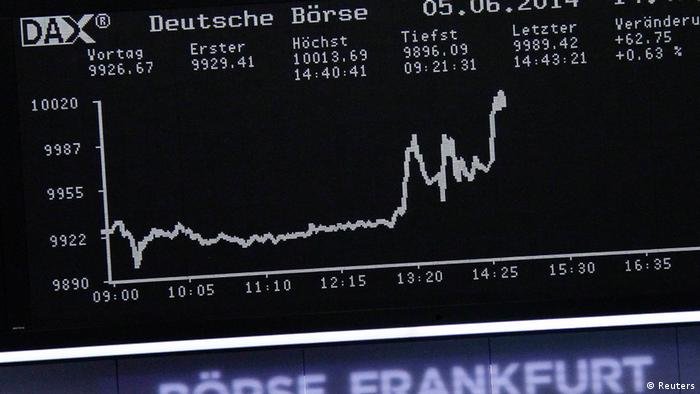 The German stock index, the DAX, has hit this mark for the first time in its 26-year history.

Stocks rose throughout Europe and the Euro fell following the European Central Bank's announcement of an interest rate cut. The DAX leapt 0.75 percent, putting it just past the 10,000 threshold for the first time at just after 2:30 p.m. local time.

The ECB said it was taking several steps to combat deflation. It cut its main refinancing rate to a record low of 0.15 percent, and also turned its deposit rate, previously zero, to a negative. Banks will now be charged 0.1 percent for parking their money with the central bank - encouraging them to loan out money to businesses instead.

ECB chief Mario Draghi said the ECB's 2014 inflation forecast had fallen to 0.7 percent, far below its target of 2.0 percent. While he said this was still high enough to avoid the risk of deflation, the bank would use "unconventional instruments within its mandate," such as bond buyups, should the inflation rate stay too low.

The euro fell around one cent to around $1.35 on the news. The strength of the currency against the dollar had been another factor blamed for sluggish growth.

The DAX - which stands for Deutscher Aktien Index, or German Stock Index - is made up of 30 blue-chip companies trading on the Frankfurt Stock Exchange, weighted according to market capitalization. The DAX began in 1988 with a value of 1,000.

The Dow and the S&P 500 Thursday bolted to new records after the European Central Bank launched aggressive measures to stimulate fragile eurozone growth and avert deflation.