The pandemic must be contained to protect economic output, the head of the International Monetary Fund has said. Business leaders and policymakers agree that supply chains need to be rebuilt with resilience in mind. 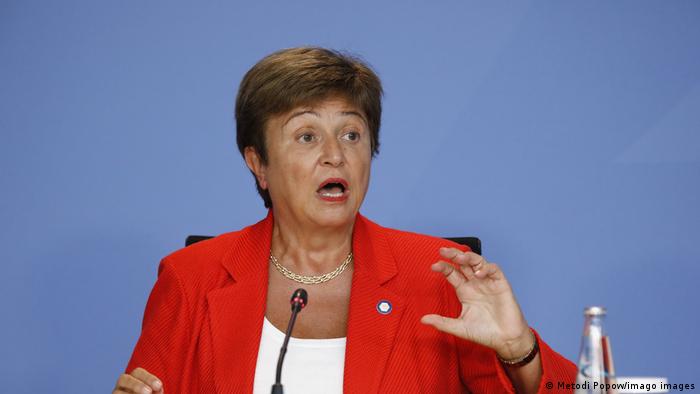 Two of the most important figures in the economic world were united in their views on inflation while speaking on the final day of the World Economic Forum on Friday.

"We see a lot of this super-strong recovery that has outpaced supply, which was constrained," European Central Bank (ECB) President Christine Lagarde said in an online panel discussing the threat of inflation on the global economy.

Consumer prices have risen significantly over the past year in many markets around the globe. The eurozone inflation rate for December 2021 was 5% — a record high for the month. But the ECB has been reluctant to combat rising prices by raising interest rates, with Lagarde insisting that the current high inflation is the product of many factors, including temporary ones.

A combination of monetary and fiscal policies helped avoid massive layoffs during the pandemic and allowed the economy to bounce back more quickly than expected, she said.

"In a way, we are a victim of our own success," Lagarde said.

Meanwhile, wages in Europe have yet to start climbing. "We are not seeing this sustainable movement that would see inflation spiraling out of control," Lagarde said.

US inflation hits 7% in December

'The world must spend billions'

"If we look at the reasons for inflation, it is not just for central bankers to fight it," she said.

Changing labor markets and other issues are also feeding into rising consumer prices, issues that policymakers in other areas would be better suited to address, she said.

The IMF chief said pandemic policy would remain a top economic policy for global leaders this year and protective measures needed to be taken around the globe in order to avoid continued disruptions.

"My main message is to recognize that the world must spend the billions necessary to contain COVID in order to gain trillions in output as a result," she said.

Not everyone on the panel was in agreement, however.

"My fear is that the beast is out of the bottle. I don't think inflation will be transitory at all," Brazilian Economy Minister Paulo Guedes said. "I think these supply-adverse shocks will fade away gradually. But there's no arbitrage on the western side to be exploited anymore. I think the central banks are sleeping at the wheel."

Creating a global trade system more resilient to future shocks was the subject of a Thursday panel that included World Trade Organization (WTO) Director-General Ngozi Okonjo-Iweala and Pat Gelsinger, the CEO of the semiconductor manufacturer Intel.

A semiconductor shortage caused in part by a spike in demand for electronics has led to a major disruption to supply chains around the globe during the pandemic.

"What we saw is that we just got focused on the cost of supply chains and the optimization of that and we lost sight of resilience and what I would call a geographically balanced resilient supply chain," Gelsinger said.

The Intel boss listed ongoing initiatives to build a larger industry presence in both the United States and Europe. Up until the pandemic, these regions had relied heavily on computer chip producers in Asia. On Friday, Intel announced it will invest $20 billion (€18 billion) in a new chip facility in Ohio. The company also plans to announce a new European facility in the near future.

Okonjo-Iweala took a constructive view on the situation, highlighting the opportunities that these "supply chain snafus" had presented.

"This is a chance for us to integrate those parts of the world ... that have been left behind and not been included in globalization," Okonjo-Iweala said. She pointed to a greater shift in manufacturing to developing economies such as Vietnam, Cambodia and Ethiopia.

"I call it a way of reglobalizing, and using globalization and supply chains to solve some of the inequality problems," she said.

The World Economic Forum's Davos Agenda was a weeklong event that brought together leaders from business, government and society to discuss critical issues affecting the global population. The virtual event was held instead of the annual meeting in Davos, Switzerland, which had to be postponed to May because of the rise in COVID-19 cases, fueled by the omicron variant.