Bayern Munich's David Alaba will miss seven weeks of action after injuring himself on international duty. The 22-year old is expected to first be available to play again in the last round of the Bundesliga. 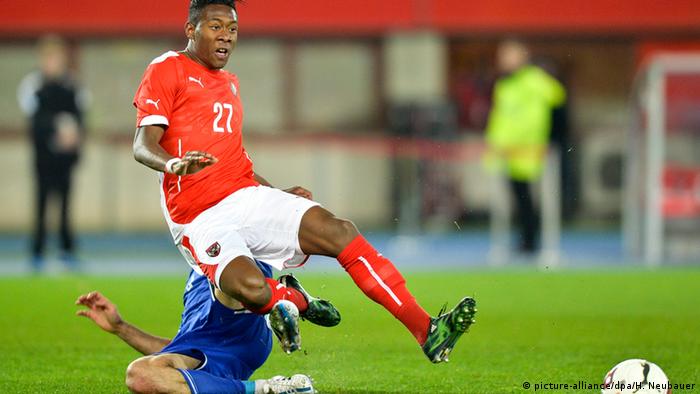 David Alaba will miss seven weeks of action and will have his left leg in plaster for 14 days after suffering a medial lateral ligament tear to his knee on international duty with Austria.

The versatile Bayern Munich star was replaced in the second-half of Austria's friendly draw with Bosnia & Herzegovina on Tuesday. The injury occurred following a clash on the touchline, which saw an opposition player fall back on to the Bayern star's left-knee.

"I’m obviously really disappointed at the moment,” Alaba told the club's website. "I have one big target: I want to be back for the finale this season. I’ll make sure I recover completely and then I’ll go for it in rehab.”

The Austrian has already missed more than two months of the season with a knee ligament problem that kept him out over the winter period. Alaba now joins Arjen Robben on the sidelines after the Dutchman was ruled out for eight weeks just last week.

Alaba is likey to miss all but one of the remaining eight Bundesliga games this season, but could return for the German Cup and Champions League finals if Bayern were to reach those stages.

The injury also rules Alaba out of this weekend's Der Klassiker clash with Borussia Dortmund. BVB themselves will likely also be without midfielder Nuri Sahin who has failed to recover from a tendon injury in his hip.

Bayern: 'We could spend 100 million on a player'

Bundesliga heavyweights Bayern Munich could spend 100 million euros on a transfer, according to the club's finance director Jan-Christian Dreesen. That amount would smash existing Bundesliga records. (30.03.2015)