Danish pumps supply water to Crimea despite EU sanctions | Europe | News and current affairs from around the continent | DW | 06.05.2021

Russia is supplying parts of Crimea with water using Danish water pumps equipped with Siemens motors. How did the pumps reach the annexed Ukrainian peninsula under the EU current sanctions? Residents in most of the districts of Simferopol have had running water for 18 hours a day since the end of April, according to local media. That's three times as much access to water as in previous years. Getting water to the Ukrainian peninsula has been difficult following Russia's annexation of Crimea in 2014.

Prior to annexation, water came from the Dnieper River via a canal. But Ukrainian authorities blocked access following Russia's annexation. Water shortages have become so acute that many observers believe recent tensions between Moscow and Kyiv could even trigger another Russian invasion.

No signs of Russian know-how

To improve the water supply in the city of Simferopol, the Beshterek-Zuysky waterworks were constructed to tap an artesian aquifer. Since the middle of March, the goal has been to supply about a third of the city's population with water — using powerful, modern pumps.

The issue, however, is that the pumps are not Russian but Danish, according to the Russian anti-corruption initiative, Scanner Project. The group discovered this after enlarging images of the pumps shown on Russian television and seeing the name of Danish pump maker Grundfos.

DW identified the pump model based on images circulating on the Internet. According to the images, seven Grundfos CR 185-8 A-F-A-V-HQQV pumps were installed in the Beschterek-Suja waterworks. They are the newest and most powerful models currently available and not officially for sale on the Russian market. According to the technical specifications, the pumps are also equipped with Siemens motors.

Russian state media has reported that only Russian technology was used in the project. Since the annexation of Crimea in 2014, the EU has had sanctions prohibiting the sale of specific goods and technology, including equipment for waterworks.

German engineering giant Siemens told DW it is in compliance with all applicable export control regulations and that it requires firms that purchase its products also to comply with the restrictions — including sanctions on good for Crimea.

"The supply contracts of the Siemens AG and its subsidiaries contain all the necessary export control and end-of-use clauses," a Siemens official said.

Regulations regarding the final destination of goods are the norm for global companies, Thomas Heidemann, a partner with the CMS law in Moscow, told DW.

"The buyer-reseller is asked to sign a so-called end-user certificate on which the customers and the finals users of the equipment are named," said Heidemann, whose company advises German investors in Russia. "The European supplier then files away this end-user certificate and can show it did everything possible to prevent a sanctions violation." 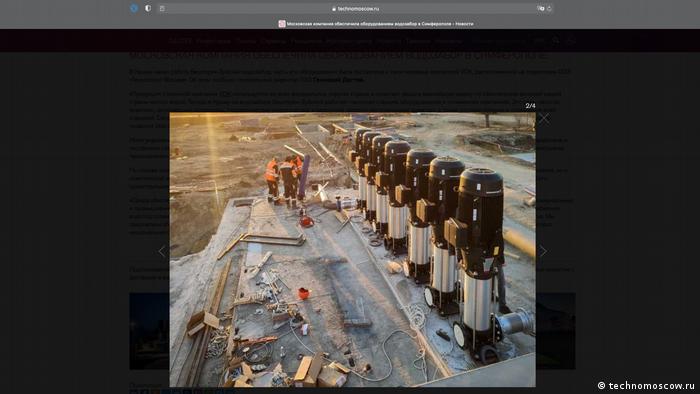 The pumps are used to supply water to parts of Crimea

Grundfos Vice President Peter Trillingsgaard told DW the company was not aware of deliveries to the annexed peninsula. There was also no comment on whether there was an end-of-use clause with either the importer or the end-user in Russia.

"If we — in a sales process — have any suspicion about breach of sanctions, we will request identification of the end-user. Our internal investigations have not revealed any transactions or correspondence that indicates that our internal rules have not been followed," Grundfos Vice President Peter Trillingsgaard told DW.

Representatives at company headquarters stressed that Grundfos complies with both international and Russian law. Those laws, however, can contradict each other.

"When delivering machines, the European supplier must observe the European sanctions. If it does not, it is not permitted to ship the goods. It is usually possible to deliver to a Russian subsidiary," Heidemann said.

Trillingsgaard said his company does not know how its products ended up in Crimea.

"The products that are installed in Crimea — from what we can see from the video — are standard pumps that Grundfos often sell to OEMs/equipment manufacturers that use the pumps as components in bigger products which are then sold," he said. "We do therefore not know how our products ended up in Crimea." 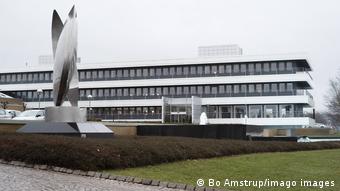 Grundfos said it complied with all applicable laws

Grundfos said it would not provide any maintenance for the equipment in Crimea.

The pumps were delivered to Crimea by the Moscow-based company VDK Avtomatika. Like other companies and agencies involved in the waterworks project, it has not responded to DW requests for comment.

Danish authorities are now examining whether Grundfos was aware of the product shipments to Crimea.

Denmark's export control regulators told DW the matter was being looked into and if necessary, a comprehensive investigation would be carried out into possible violations of EU sanctions. The Danish law calls for a fine or imprisonment of up to four months for violations of sanctions and up to four years in particularly aggravating circumstances, Danish authorities said.

This article was adapted from Russian and German.