Descriptions of pianist and conductor Daniel Barenboim tend toward the superlative. The celebrated maestro is also a public relations mastermind who puts music in the service of a higher goal.

2015: the opening of the Beethovenfest in Bonn. The Staatskapelle Berlin plays the Variations for Orchestra by Arnold Schönberg. Daniel Barenboim conducts — by heart.

These 21 minutes of abstract and highly complex polyphonal music are the opposite of accessible. For the listener, the themes and developments are difficult to grasp, and memorizing the score would appear to be a unfathomable mental task.

1991: At the Bayreuth Festival, Barenboim conducts "The Ring of the Nibelung." In a later interview with DW, he recounts the entire plot of the 16-hour, four-opera cycle in just a few minutes, in clear and casual terms. Clearly, the maestro has a knack for precise communication.

Matthias Schulz, the newly designated director of the Berlin State Opera, has described Barenboim as "inexplicable. He lives in various worlds. Pianist, conductor, general music director, international celebrity. And he always has the institution in mind, wants to advance it. That, too, is unusual," he said.

Barenboim keeps more than one institution in mind. Apart from the Berlin opera, the associated Staatskapelle Berlin has named him its conductor for life. And the Barenboim-Said Academy, also in Berlin, described as an "expansion on the idea" of the West-Eastern Divan Orchestra. Consisting of musicians from Israel and Arab countries, the orchestra was co-founded by Barenboim and the late Palestinian literature critic Edward Said in 1999. 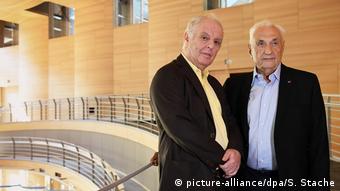 On November 15, his 75th birthday, Barenboim plays piano solo at the Berlin Philharmonic, joined by the Staatskapelle Berlin and his friend, the conductor Zubin Mehta, who has described him as "probably the greatest musician of our time."

Fortune magazine listed Barenboim among the world's 50 greatest leaders in 2015. The name Barenboim has clout: hardly any other classical musician has earned equal attention — including that of the world's political leaders.

This past April, at the opening of the Pierre Boulez Hall in Berlin, Germany's then-president Joachim Gauck described "the good fortune of this close relationship between Berlin and Daniel Barenboim. The Barenboim-Said Academy and this wonderful hall are actually a gift for Berlin — and for Germany."

The maestro has clearly succeeded in convincing political leaders of his vision. The academy and its Pierre Boulez Hall were not only established with generous governmental support, their ongoing operations are also largely publicly funded. Bringing young people from mutually hostile countries to study music and the humanities together reflects the conviction that classical music can and should contribute to peaceful coexistence.

Barenboim was even able to involve his friend, star architect Frank Gehry, in the enterprise, getting him to design the audacious, oval-formed concert venue for free.

2015: The Berlin Philharmonic is in the process of electing its future music director and principal conductor, and Ulrich Eckhardt, the orchestra's long-serving general director, says only one man is qualified: Barenboim. But having been passed over for the job twice in his long career, the conductor declares he is unavailable. The position eventually goes to Russian conductor Kirill Petrenko. 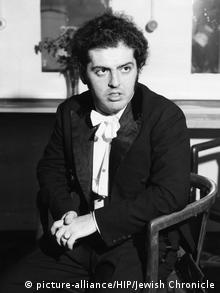 In the 1970s, Barenboim conducted orchestras in Paris and Chicago

2001: Barenboim conducts the "Liebestod" (Love-Death) from Richard Wagner's opera "Tristan and Isolde" in Tel Aviv. Some listeners leave the hall in rage, and there are subsequent protests in the Knesset. Wagner had been a favorite conductor of the Nazis.

2005: At a concert in Ramallah in the Israeli-occupied West Bank, Barenboim leads an orchestra of young Israelis, Palestinians and musicians from various Arab countries who have traveled there under extremely trying conditions. "Sometimes the impossible is much easier than the difficult," he says.

But more than decade later, even Barenboim's optimism could probably not overcome the obstacles of the intractable Mideast political situation.

A citizen of Spain, Israel and Palestine, Barenboim remains an outspoken critic of Israeli policy. "It truly pains him that Israel has taken this direction," says his wife, Elena Bashkirova. "In Israel, he's been spat on, on the street — and mobbed. Sometimes he even needs a bodyguard."

Yet the maestro continues to operate on the principle he expressed in 2005, saying, "this concert will not bring peace. But what it will bring is understanding, patience and curiosity for the other person's story." 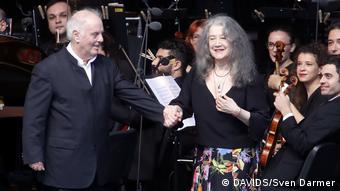 Barenboim, Argerich and the West-Eastern Divan Orchestra performed at Berlin's Waldbühne in August

Barenboim maintains a busy schedule, as his calendar for 2017 proves. Born on November 15, 1942 in Buenos Aires, Argentina, he returned there this year to join Argentine pianist Martha Argerich in a piano duo, having known the world star since childhood.

On October 3, he conducted at the reopening of the Berlin State Opera Unter den Linden. Throughout the year, he's performed and conducted all of Franz Schubert's piano sonatas and symphonies in the Boulez Hall, having learned several of the sonatas after reaching the age of 70.

Orchestre de Paris, Chicago Symphony Orchestra, La Scala in Milan and the Staatskapelle are the main stations in Barenboim's career, but there is hardly an orchestra of world status he hasn't guest-conducted.

In 2016, Barenboim set up his own YouTube channel to mount brief descriptive essays on various works and phenomena in the music world. That, too, reflects his talent for clear and understandable communication — and his desire to expand not only his audience's knowledge, but also its size.

"My father can't do just one thing," said his son, David. "He always has four or five irons in the fire." The Lebanese cellist Nassib Ahmadieh calls him "a very important and rare example of the fact that music should be a means to a higher goal."

But do the overarching goals and the ease with which Barenboim conquers every score stand in the way of a distinctive artistic expression? Cautious criticism can be heard. Whether at the piano or the podium, his performances can sometimes sound desultory. And the aged pianist Menahem Pressler has said: "Barenboim would be a better pianist if he'd practice."

The full calendar, the many appearances, the organizational responsibilities of orchestra, opera and academy: is Barenboim addicted to life in the public eye? With advancing age, he seems to be aware of the risk, having recently said in an interview with Radio Bavaria, "I won't stay a day longer if I have the feeling that the orchestra doesn't want that anymore. That goes for playing the piano, too. I hope that I'll have the objectivity to know when I should stop."

That day doesn't seem to be coming any time soon.

Berlin adds a new attraction to its cultural crown with the Pierre Boulez concert hall. Designed by star architect Frank Gehry, it's part of the new Barenboim-Said Academy founded by Daniel Barenboim. (04.03.2017)