A center for chamber music, the West-Eastern Divan Orchestra and the new Barenboim-Said Akademie, Berlin's concert-space-in-the-round has started its public life with a 3-hour concert. President Gauck was in attendance. 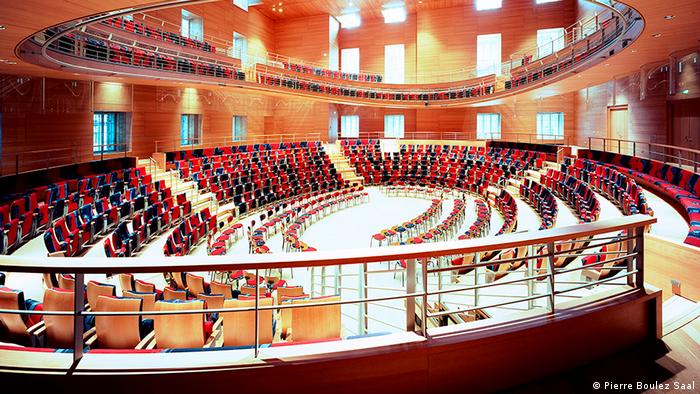 Conductor and pianist Daniel Barenboim presented the first concert of the new Pierre Boulez Saal next to the Berlin State Opera building on Saturday night.

Named after the late French composer and conductor Pierre Boulez, who died last year aged 90, the concert hall was designed by US architect Frank Gehry.

German President Joachim Gauck, who was present for the concert, said "the capital owes this house to the good relationship between Berlin and Daniel Barenboim."

The inaugural, 3-hour concert involved artists "celebrating the idea of what this new hall stands for: to create a space where beloved classics, modern masterworks of the early 20th century, and music of our time can be heard side by side and inspire audiences and performers alike," the organizers announced.

Barenboim is general music director of the Berlin State Opera and the Staatskapelle Berlin.

A space in the round

Architect Gehry designed the hall to Barenboim's request for a new chamber music hall. Boulez had wanted to create a modular, 360-degree space to involve musicians and audience in the performances.

Gehry was at the opening concert on Saturday and celebrated the occasion with Barenboim:

The building will house more than the planned 100 concerts each year. In 1999 Barenboim and the late scholar Edward Said founded the West-Eastern Divan Orchestra which includes young Arab and Israeli musicians.

As a continuation of the project, the building will be the center for "the Barenboim-Said Akademie" which aims "to unite talented, young musicians from the Middle East, North Africa, and around the world."

"Inspired equally by its namesakes, the Akademie’s unique curriculum integrates intensive music performance studies with a grounding in the humanities," the founders said on their website.

Acoustic expert Yasuhisa Toyota, who was involved with the acoustics for Hamburg's new philharmonic, the Elbphilharmonie, also worked on the acoustics of the Pierre Boulez Saal. Berliners gave the new music hall the nickname the "Small Elbphilharmonie," although it did not carry a huge price tag or suffer long delays.

The Pierre Boulez Saal was completed on time and on a budget of 21.4 million euros ($22.7 million). The funding came from the German government and 13.7 million euros came from private donors and sponsors.