Danes unmoved by border checks as refugees caught in the middle | Europe| News and current affairs from around the continent | DW | 06.01.2016

Danes unmoved by border checks as refugees caught in the middle

Experts call it "political theatrics," while many Danes consider it a necessary step. But the border dispute in Scandinavia could leave thousands of refugees in limbo on the German border, reports DW's Peter Dahl. 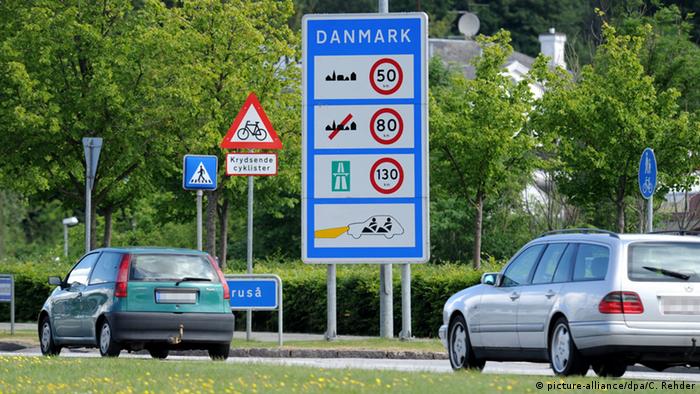 A soap bubble floats through the halls of Flensburg train station in Germany. But where there should have been laughter, there's barely even a smile. Raheb loads the bubble blower and shoots off another round. There's hardly a trace of childhood left on the five-year-old's face. Three weeks ago, she, her mother and her two younger siblings fled the civil war in Syria, soon entering its fifth year.

They've waited for this moment for almost a year, Raheb's mother, Ruqia, tells me. For her husband to gain asylum in Denmark so it would be safe to send for them. Now they're here, just minutes from the border. But because of a new law the Danish government announced just 24 hours earlier, Ruqia is afraid her kids won't see their father any time soon.

The stakes for thousands of refugees grew this week, after first Sweden, then Denmark on Monday decided to impose tougher, albeit temporary, controls along their southern borders in a desperate attempt to stem the influx of migrants.

Sweden said it had no choice but to slam the brakes after more than 160,000 people applied for asylum there last year - the highest of any European country as a proportion of the population. In contrast, Denmark received just over 20,000 asylum requests.

Justifying his move, Danish Prime Minister Lars Lokke Rasmussen said he was "simply reacting to a decision made in Sweden," which would make Denmark a bottleneck for migrants traveling north. For all his tough talk on immigration during last year's election campaign, the Danish leader on Monday assured reporters that "this [was] not a happy moment at all."

And so the Danish Kingdom became the latest of six EU countries to temporarily suspend the 20-year-old Schengen Agreement, which transformed most of Europe into a passport-free zone. The trend has led some analysts to warn of a "domino effect." If other Schengen members follow suit, they fear, it could sound the death knell for one of the EU's proudest achievements.

The irony is that the person who could go down in history as Schengen's Brutus is the very prime minister who just last month fought tooth and nail to hand over more power to Brussels in a referendum that was soundly rejected by voters. 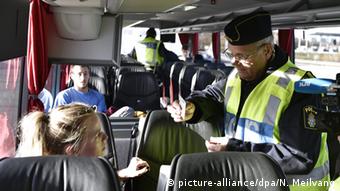 But Monday's move may be his best shot at surviving as prime minister of a minority government whose existence hangs in the thread of an increasingly volatile supporting coalition of center-right parties.

According to Thorsten Borring Olesen, a professor at Aarhus University's School of Culture and Society, Løkke Rasmussen's self-proclaimed "big step" on border controls is in fact more of a political split. "He's trying to have the cake and eat it too by, on the one hand, symbolically bowing to the [powerful right-wing] Danish People's Party, while, on the other hand, introducing checks that are so timid that they don't threaten Schengen and Germany, as well as key players of Danish industry."

Still, the prime minister's balancing act won't necessarily be followed by a standing ovation. In recent weeks alone, his love-affair with the right-wing has cost him several party members, who have either defected or publicly lashed out. Much of their wrath is also directed at his minister for immigration, integration and housing, Inger Støjberg, who has courted controversy with anti-immigration rants. On Monday, she fueled the opposition even further, when she raised the possibility of deploying hundreds of troops to protect the nation's border from non-Western intruders.

'Keep out the terrorists'

But it's not all boos for the Danish leader. In the small town of Krusa, a rural outpost so close to the German border you could practically stand with one leg in each country, many welcome the handful of officers who have been stationed here since Monday to keep out unwanted guests. 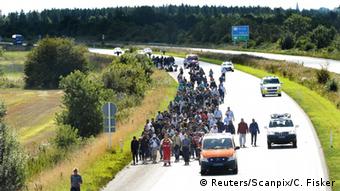 "They [the Danish government] should've never opened the borders in the first place," complained Gritt, a Danish woman in her late-50s whose hot dog stand has been a staple here for nearly three decades. Her 10-square-meter sausage shed is one of the last businesses standing in a town that has been all but abandoned, drained by the lack of promise and kept on virtual life-support by commuters who work or study on either side of the border.

"We don't know who's crossing our borders anymore," she said. "If [border checks] is what it takes to keep out the terrorists, so be it," she added, echoing sentiments that have reverberated throughout the EU's 28 member states since IS supporters disguised as Syrian refugees were alleged to have been involved in the deadly Paris attacks two months ago.

"If they've got nothing to hide, what are they [the migrants] so afraid of?" she asked rhetorically, while German license plates whizzed by her window.

At a nearby bus stop, waiting to go to Aarhus, 67-year-old Ruth Jespersen, was more hesitant. "It does seem like a step back," she said, then paused. "I've always said we need to help, but it's too much." "Plus, if that's what it takes to stop the terrorists ..."

No protection against evil

In many ways, the carnage in the French capital cut open a wound that was just beginning to heal for a lot of Danes, after a self-proclaimed IS supporter went on a rampage in Copenhagen last February, killing two people.

But for Majbritt, borders are no protection against evil. The native German, who has worked and lived in southern Denmark for more than two decades, said seeing the border patrols return was like a flashback to the 1980s and the time of the Cold War. 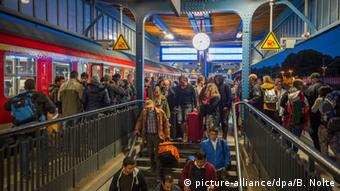 "As long as it's just a few days, I guess it's okay," she said, peering out of her window as the officers signaled at the driver of a gray Ford to roll down the window.

"But this can't go on," she said. "We need to work more closely across borders, and not rebuild them."

For now, though, few believe the checks are enough to cause any serious damage. "It's all political showmanship," said Peter Hansen, head of the cross-border initiative Region Southern Jutland-Schleswig which promotes Danish-German relations and advises commuters and businesses from Haderslev to Schleswig.

While Monday's announcement has caused some confusion on both sides of the border, Hansen told DW most commuters' biggest worry was not being late for work because of the checks. "The politicians may be trying to play this up, but on the ground, everything's fine."

But for the thousands of refugees, who, like Raheb and her siblings, are waiting to be reunited with their loved-ones, it's another blow to their pursuit of a better life.

Names of refugee family members have been changed at their own request.

German Foreign Minister Frank-Walter Steinmeier has warned that European freedom of movement could be at risk. His comments follow Denmark's move to temporarily reintroduce passport checks at its border with Germany. (05.01.2016)

Opinion: The return of barriers in Europe?

Six European countries have reintroduced border controls. DW's Barbara Wesel predicts that this will jeopardize much more than just free travel across the continent. (05.01.2016)

Amid ongoing tensions with her allies in Bavaria, Angela Merkel has refused their plan to place a cap on incoming aslyum seekers. The proposed upper limit of 200,000 for 2016 was "not the chancellor's position." (04.01.2016)