Cynthia Ritchie on Pakistan rape allegations: ′I hope my experience helps other victims′ | Asia| An in-depth look at news from across the continent | DW | 18.06.2020

Cynthia Ritchie on Pakistan rape allegations: 'I hope my experience helps other victims'

US blogger Cynthia Ritchie has unleashed a political storm in Pakistan by accusing a former interior minister of raping her. In a DW interview, she explains why speaking out against sexual harassment is important. 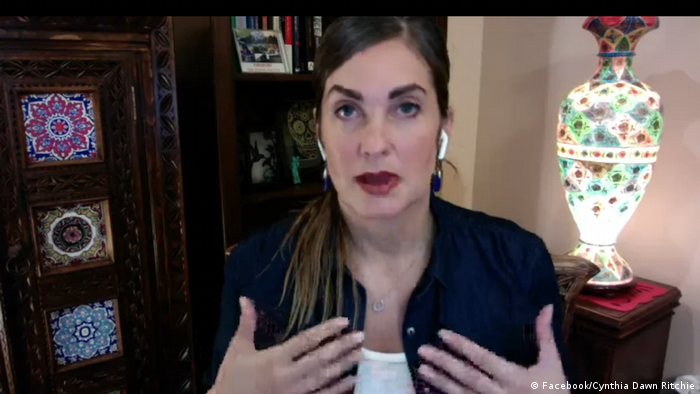 Cynthia Ritchie, who first came to Pakistan in 2010 and has more or less resided there since, describes herself as an "American freelance director, producer and writer" on her social media accounts.

Earlier this month, Ritchie accused former Pakistani PM Yousaf Raza Gilani of sexually harassing her, and former interior minister Rehman Malik of raping her in 2011. Both politicians belong to the Pakistan People’s Party (PPP), which was once headed by former PM Benazir Bhutto, who was slain in a 2007 terror attack in the city of Rawalpindi.

Prior to these allegations, Ritchie also targeted Bhutto in one of her tweets.

The former ministers have denied Ritchie's accusations, but the US writer says she is ready to defend her claims in the court of law.

Sexual harassment is a tabooed topic in Pakistan. Since Ritchie's allegations involve a popular political party and its leaders, many in Pakistan accused her of "ulterior motives." The rape allegation has thus been shrouded in a political controversy, undermining a potential #MeToo moment.

In an interview with DW, Ritchie explains why she felt the need to talk about the alleged sexual harassment.

DW: Why did you choose to come out with rape and sexual harassment allegations against the Pakistan People's Party (PPP) leadership at this time?

Cynthia D Ritchie: Several weeks ago I began telling my story on my Facebook page. This was one month prior to the controversial Benazir Bhutto tweet and several weeks prior to my second Facebook live video about maltreatment at the hands of PPP members.

In the first video, I discussed the years of harassment and abuse I'd endured from members of various parties – but more importantly, I discussed what happened when my siblings disclosed very detailed information to a person pretending to be a half-sibling, from my father's first marriage. The fake Facebook profile that the person had communicated through was traced to PPP and Pashtun Tahaffuz Movement (PTM) accounts, which then shared our personal information online. Abusing me is one thing. Abusing my family is where I draw the line.

Being a midwife in Pakistan's remote areas

Being a midwife in Pakistan's remote areas

Many people, who are neutral to the controversy, say that your earlier comments on Bhutto's marital life were in bad taste. Do you agree with this criticism?

The definition of bad taste is relative. My tweet stated that "this echoes" what I'd been told by senior PPP ministers. These MPs, including [former interior minister] Reman Malik, seemed fascinated with rape culture and even more so, in the idea of a woman in authority ordering the rapes of other women. My criticism was of the rape culture, and in no way directed toward Benazir Bhutto.

PPP supporters say that because you are close to the military and Khan's Pakistan Tehreek-e-Insaf (PTI) party, you're using the rape allegations to hurt the opposition. How do you react to these allegations?

It's natural for the PPP to say this. The PPP is a struggling, dying party of its own doing and will use any excuse to try to stay relevant. Their previous image of being "pro-democracy and women's rights" has been exposed for the sham it was and is. The reality is that the PPP leaders have done nothing for the people. Much of the old guard needs to be replaced with fresh thinkers with genuine interest in Pakistan's progress.

You have been living in Pakistan for a decade. How do you see the issue of sexual harassment in the country?

I understand why some women choose to wear burqas as a protective cover to keep the men from staring. It's important to note that both women and men stare, but men are more obvious. In Islam, men are taught to lower their gaze in front of a woman, but that does not happen often. But the problem of harassment – both online and offline – comes mostly from the educated elites.

Have you ever experienced harassment from members of the ruling PTI party?

I have experienced a few cases of mild harassment from PTI workers in the past, however nothing close to the violent, aggressive attacks I have endured from men affiliated with the PPP.

How are women harassed in elite circles in Pakistan, and what have you witnessed?

I've met many nice people in the so-called elite circles. I've also seen both sexes mistreat their servants, servants' children, and scream abuses at poor people in the markets. In Pakistan, abuse is not as openly discussed as it is in the West. Abuse seems to be more acceptable as long as one maintains a luxury lifestyle.

Why did you prefer to take to social media to discuss the rape allegations?

I didn't have the same social media following in 2011 that I have now, and felt that social media was the best way for me to tell my story, unedited.

Do you think you can prove your allegations in the court of law?

I choose to have faith. If I don't get justice from the courts, I will take this to the UK and the US where PPP workers continue to harass me online and via other methods. And I will continue my online campaigns as necessary.

The court has registered a first information report (FIR) against you. Do you think you will be arrested?

The honorable court mishandled the case and acted outside the scope of its jurisdiction. The authorities tasked with investigating cyber crimes have said that I have not committed a crime. Furthermore, in English law, a deceased person cannot be defamed. If, by chance there was a legitimate defamation case, the guardian or heirs must file the complaint before the court – in this case the children of Bhutto – which they have not done.

I am finally ready to tell my story and if nothing else comes of this, I hope my experiences help other victims of abuse know that they are not alone.

The interview was conducted by Haroon Janjua, DW's correspondent in Islamabad.