Custodial deaths in India: A toxic play of power and class

Mounting levels of custodial deaths in India are alarming citizens and advocates alike. Experts say violations of laws against custodial torture are commonplace and that many police consider violence a legitimate tool. 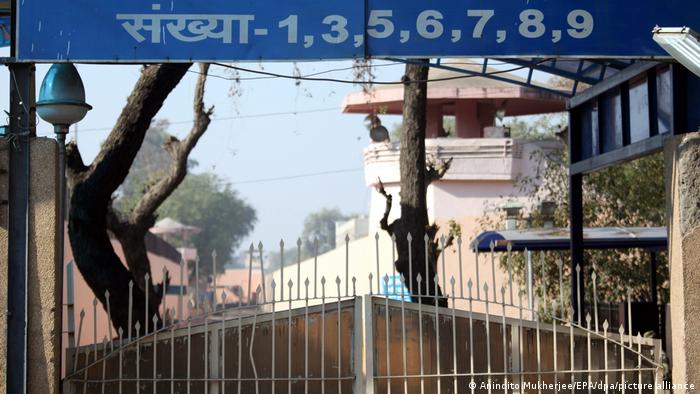 Official records say 2,000 people in India have died in custody in the past 20 years, but rights groups say the figure is much higher

In the last two decades, 1,888 custodial deaths have been reported across India, with 893 cases registered against police personnel, while a mere 358 police officers and justice officials were formally accused.

Just 26 policemen were convicted in this period, official records show.

Data compiled by the country's Crime in India reports from 2001-2020 showed that 76 custodial deaths were reported last year.

The state that reported the highest number of such deaths in 2020 was Gujarat on the western coast with 15, followed by Uttar Pradesh in the north. No convictions were reported last year.

Yet according to a report by the National Campaign Against Torture (NCAT), approximately five people died in custody every day in 2019. Cases documented by the NCAT suggest the situation is far worse than is shown in the Crime in India statistics. Its reports suggest as many deaths occurred in 2019 as the country's official crime bureau believes occurred over a 20-year period.

There have been scores of horrific cases of custodial deaths in India in the recent past, but the death of a youth, Altaf, in a police station in northern Uttar Pradesh, created a storm earlier this month.

While police claim that the 22-year-old Muslim man hanged himself from a tap in the washroom just two feet (61 centimeters) above the ground using the drawstring of a jacket hood, his family alleges that he was murdered and demanded that the Central Bureau of Investigation carry out an inquiry into his death.

There have been other cases that have startled the nation. In June last year, both P. Jeyaraj, 58, and his son Bennix, 38, were arrested for allegedly violating COVID-19 lockdown rules by keeping their store open past the allowed hours in Tamil Nadu.

Two days later, they died of alleged police brutality. The growing outrage across the country over their deaths put a massive spotlight on custodial deaths, reviving demands for police accountability.

Civil rights lawyers, NGOs and former police officers working in this area believe that not all deaths in judicial custody are the result of torture or beatings and that some can be attributed to ailments or medical negligence. But those in police custody tend to be the result of violence.

"The high incidence of death in custody demonstrates complete acceptance of violence as the universal first response used in investigations at police stations," Maja Daruwala, chief editor of the India Justice Report and adviser to the Commonwealth Human Rights Initiative, told DW.

"It also signals acceptance of illegality and impunity within the force by those with the responsibility of supervising the force," she said.

The People's Union for Democratic Rights (PUDR), which has been investigating incidents of deaths in police custody and publishing reports since the 1980s, said it has met with immense resistance from the police department to registering complaints against accused officers while assisting families of victims of custodial deaths.

The PUDR said deaths were most commonly the unintentional consequences of custodial torture, which was part of routine police practice.

"There has been open defiance of court orders. The Supreme Court had given clear directions last year for the installation of CCTV cameras in every police station across the country, but is facing a hard time itself obtaining compliance affidavits from various states," Radhika Chitkara, the secretary of the PUDR, told DW.

In August, the chief justice of India, N. V. Ramana, expressed concerns at human rights violations occurring at police stations that were leading to custodial deaths, among othe things.

"Lack of effective legal representation at the police stations is a huge detriment to arrested or detained persons," Ramana said.

"Going by the recent reports, even the privileged are not spared third-degree treatment," he added.

However, they would seem to be in the minority of those suffering police mistreatment. Another disturbing aspect of custodial deaths, according to prison data, is that at least two in three prisoners in India are from social groups that the government officially classifies as Scheduled Castes, Scheduled Tribes or Other Backwards Classes.

In other words, those from marginalized castes and poorer sections of society are much more likely to be on the receiving end of police violence and to be tortured than people who have financial or political influence.

NCAT analysis showed that 125 people who died in custody in 2019 belonged to the poor and marginalized communities. They included 13 from Dalit — a name given to people belonging to the lowest caste in India — and tribal communities, while 15 others were Muslims.

The report also stated that out of the 111 documented custodial deaths, 55 resulted from suicide. In the case of alleged suicides, Uttar Pradesh topped the charts, followed by Andhra Pradesh.

"So, what is missing here that will make authorities work humanely? It is the element of accessibility. The system of justice delivery is just not accessible to common citizens" V. N. Rai, former police chief and director of the Indian police academy, told DW.

In Rai's reckoning, there were enough safeguards with respect to arrest but nothing has changed the "brutal policing in intent and profile."

"We have reached the optimum in terms of reining in authority with accountability. It is time to optimize the ability of citizens to invoke a time-bound justice protocol," said Rai.

The increasing number of custodial deaths in India with little to no police accountability has shed light on the systemic flaws that have eroded the justice system and compounded human rights violations.