India: Probe into gang-rape death taken over by federal police

The victim, a 19-year-old Dalit woman, died earlier this week from injuries sustained during an alleged gang rape by four upper-caste men. Local police have been accused of mishandling the investigation. 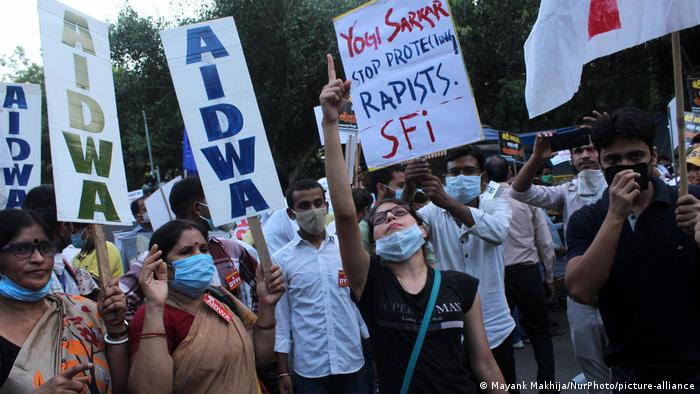 India's Central Bureau of Investigation has taken over the case of a 19-year-old Dalit woman who was allegedly gang raped and murdered in the north of the country, a spokesman for the police said on Sunday.

The woman was assaulted by four upper-caste men in a field outside her village in Uttar Pradesh, India's most populous state, on September 14. Her death in a Delhi hospital earlier this week, from injuries sustained in the attack, triggered public protests and outrage from the two biggest opposition parties.

A special team from Uttar Pradesh state police had been investigating the incident. But the state's Chief Minister Yogi Adityanath has asked federal authorities to take on the probe, a government statement said.

Local police have been accused of mishandling the case, delaying the registration of complaints by the victim's family and cremating her remains against her family's wishes. Five policemen, including the district police chief, have been suspended.

Adityanath also has faced criticism for not allowing media and opposition parties to speak to the victim's family.

Dalits, formerly known as untouchables, are the lowest rung of India's archaic caste system. They have historically faced discrimination despite new laws enacted to protect them.

The young woman's death comes months after four men were hanged for the 2012 gang rape and murder of a student on a bus in New Delhi, in a case that shook the nation.

India is one of the world's most dangerous places for women. Federal data suggests that a rape occurs every 15 minutes. Four men were executed earlier this year over a 2012 gang rape of a 23-year-old woman on a Delhi bus.

More than 100,000 people have died of the coronavirus in India. Meanwhile, US President Donald Trump's diagnosis has thrown his re-election campaign into disarray. DW rounds up the latest.

Why Indian farmers are angry over agricultural reforms

Thousands of farmers have taken to the streets to protest against new agriculture laws that the government says will boost growth. Critics say the reforms could lead to the exploitation of farmers by big corporations.