Diplomatic ties between Havana and Washington have been restored after Cuba officially re-opened its embassy in the US capital after 54 years. The two nations had severed ties in 1960. 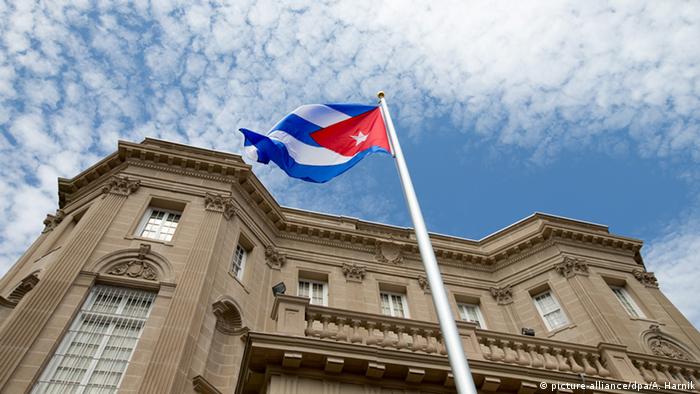 Cuban Foreign Minister Bruno Rodriguez attended the flag-hoisting ceremony in the US capital on Monday, calling the diplomatic thaw "an opportunity ... to establish new bilateral relations, quite different from whatever existed in the past."

The Cuban flag was hoisted over Havana's embassy in the US, known only as the Cuban Interests Section prior to the formal resumption of diplomatic relations on Monday. DW TV's correspondent in Washington, Richard Walker, was at the event:

However, Rodriguez - who was set to meet with his US counterpart John Kerry later on Monday - also said that many remaining issues between the US and Cuba still awaited resolution.

"The historic events we are living today will only make sense with the removal of the economic, commercial and financial bloackade, which causes so much deprivation and damage to our people, the return of occupied territory in Guantanamo, and respect for the sovereignty of Cuba," the foreign minister said.

The event marked a milestone in diplomatic ties that were restored after a meeting between US President Barack Obama and his Cuban counterpart, Raul Castro in December last year.

Earlier, officials hung the Cuban flag in the lobby of the US State Department, alongside flags of other countries which have diplomatic ties with the US. Shortly after midnight, the Cuban Interests Section in Washington added the word "embassy" to its Twitter handle.

The US embassy in Havana was also officially reopened on Monday, but the "Stars and Stripes" was not expected to be raised until Secretary of State John Kerry visited the Cuban capital on August 14. Deputy Chief of Mission for the US in Havana, Conrad Tribble, tweeted from his account:

Relations between Cuba and the US were frosty for over five decades after former President John F. Kennedy and Fidel Castro got embroiled in a spat over Soviet expansion in the Americas.

Diplomatic connections were discontinued in 1961 and the two countries were represented by limited service interest sections. A thaw in ties took place last year in December, when Obama met Cuba's Raul Castro at an Americas summit in Panama and announced they would resume full ties.

Cuba is gradually emerging from diplomatic isolation after decades of ostracism, as it and the United States open embassies in each other's capitals. It's a good start but it comes too late, writes DW's Miodrag Soric. (20.07.2015)