The Cuban authorities had revoked the credentials of five EFE journalists on Saturday before a planned protest. Spain's Foreign Ministry said it "will not rest until all the credentials are returned." 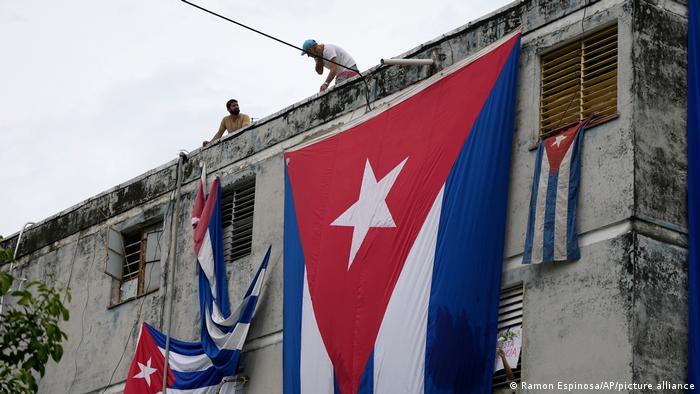 Cuban flags hung over one of the protest leaders' homes

Cuba will return the press credentials of two journalists of the Spanish EFE news agency, the Spanish Foreign Ministry said on Wednesday.

Authorities on the Caribbean island had removed the accreditation of five journalists on Saturday without offering any explanation.

Even after the communist state reinstated the accreditation of two others on Sunday, the EFE agency chief demanded that all reporting permits be returned.

Spain's Foreign Ministry on Wednesday said Cuban authorities had told the Spanish government of the decision to reinstate the two journalists' reporting credentials.

Cuba would also give a journalist's visa to a new EFE delegate in Cuba, Juan Palop, appointed to join the agency last July.

"We will not rest until all the credentials are returned," a Spanish Foreign Ministry spokesman said.

It came after Saturday's withdrawal of press credentials for five EFE journalists ahead of planned protests by opposition groups on Monday. The move was rebuked by the EU, UN and Spain.

The Monday protests did not go ahead as security forces in the Cuban capital, Havana, arrested protest leaders and flooded the streets to prevent any mobilization.

One of the Cuban protest organizers, playwright Yunior Garcia Aguilera, on Wednesday flew to Madrid on a tourist visa after being under house arrest until Monday.

How did the Spanish react?

The Spanish government called on Sunday for meetings with the charge d'affaires at the Cuban Embassy in Madrid. It asked for explanations for Cuban actions and demanded that credentials be restored.

The pressure had immediate effect as Cuban authorities indicated that two journalists would get their press credentials back. On Wednesday, they announced that two more would get their rights to report on the island returned to them on November 28.

But the president of the EFE news agency, Gabriela Canas, said Cuba's actions were "insufficient."

She called on Cuba to return "all" of EFE's reporting privileges and said the "harassment" had been "serious" recently.

"What has happened in recent weeks is an unprecedented attack on the world's leading Spanish-language agency," Canas said.

Both Reporters Without Borders and the International Federation of Journalists backed calls for all EFE journalists to be given their full press credentials.