Cuba protests: What you need to know

Anger over high prices, long food lines and lack of vital medicines have sparked the biggest protests in Cuba in decades. DW has the overview. 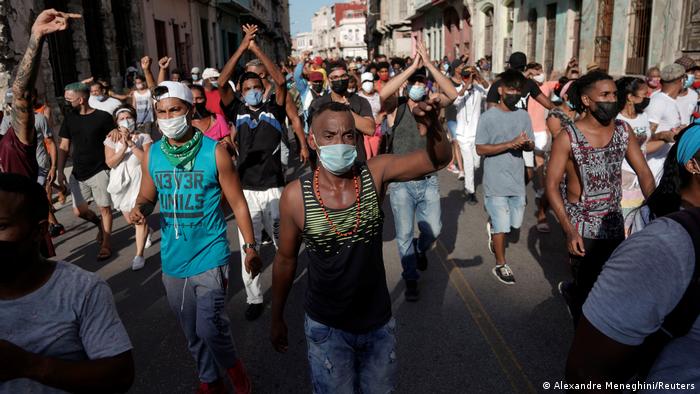 Cuba saw its largest anti-government protests in decades this weekend, with Cuban President Miguel Diaz-Canel cracking down on the demonstrators.

Here's a look at why Cubans are protesting, what it means for the island country, and how the international community has responded.

Cuban police were deployed to major cities such as Havana on Monday following the protests a day earlier. Streets in Havana were quiet due to the ramped up police presence.

Authorities have blocked social media sites in an attempt to censor information about the demonstrations. Mobile internet outages — the only way Cubans can go online — are also common.

"We have seen how the campaign against Cuba was growing on social media in the past few weeks," Diaz-Canel said Monday in broadcast remarks. "That's the way it's done: Try to create inconformity, dissatisfaction by manipulating emotions and feelings."

At least 100 demonstrators, journalists and activists have been arrested since Sunday's protests, according to the exiled Cubalex human rights group.

Thousands of Cubans poured into the streets of Havana and other cities on Sunday in the largest demonstrations against the government in nearly 30 years.

The protesters chanted slogans such as "Down with the dictatorship" and "We want liberty." Others shouted "No tenemos miedo" or "We are not afraid."

"We started to cover it from the first protest in the west of the island," Cabrera told DW. "And then through social media, you could see there was then at least one demonstration in every province of the country. It really was nationwide."

There was no formal organizer of the anti-government demonstrations.

One of the most notable protests occurred in San Antonio de Los Banos, a city of some 50,000 people located southwest of Havana. Diaz-Canel personally showed up to the demonstration in the city, where he was met with insults from angry protesters.

The social media blackout makes it difficult to determine whether protests have continued for a second day. Some unverified Twitter posts show anti-government demonstrations taking place on Monday in Holguin, a city in eastern Cuba.

The protesters are angered by long food lines, lack of medicine and rising prices on the island.

"The problem is that the government doesn't have any foreign exchange currency to import food or medicine or fuel, so there are shortages of all basic goods in the stores," American University professor and Latin America expert William LeoGrande told DW.

"There are electricity blackouts which remind Cubans of the worst times of the 1990s after the collapse of the Soviet Union. And people are frustrated at the spread of COVID,"  LeoGrande added. The country is currently experiencing a record number of coronavirus cases.

Travel restrictions during the coronavirus pandemic have devastated Cuba's tourism sector, a major driver of the economy. One of the country's key exports, sugar, also witnessed a poor harvest this year amid the pandemic.

"People are eager for economic freedom, for freedom of expression," according to journalist Monica Rivero Cabrera. "So it's hard to say there is only one cause for this unrest."

What has the Cuban government said about the unrest?

Diaz-Canel and other top Cuban officials have accused the US of orchestrating the unrest.

The Cuban president said Monday that the US is pursuing a "policy of economic suffocation to provoke social unrest in the country."

He tweeted that "the counterrevolution dreams of war between Cubans" and emphasized national unity.

The US has put Cuba under a comprehensive embargo since 1962, limiting economic trade.

Diaz-Canel had previously called on communist supporters to confront "provocations" by the protesters.

Rogelio Polanco Fuentes, a top official in the Communist Party of Cuba, said the demonstrations were funded by the US government to foment "instability and chaos" in the country.

He compared the protests to the US-backed demonstrations in 2019 against Venezuelan President Nicolas Maduro, a Cuban ally.

How has the international community reacted to the protests?

US President Joe Biden expressed solidarity with the protesters in a statement on Monday.

"We stand with the Cuban people and their clarion call for freedom and relief from the tragic grip of the pandemic and from decades of repression and economic suffering to which they have been subjected by Cuba's authoritarian regime," Biden said.

American University professor LeoGrande said the unrest would make it "more difficult" for the Biden administration to change hardline US policy towards Cuba.

Prominent Cuban-American politicians, such as Florida Senator Marco Rubio, condemned the actions of the Cuban government towards the demonstrators. Twitter users shared the #SOSCuba hashtag to raise awareness of the situation and call on foreign assistance for the country.

EU High Representative for Foreign Affairs Josep Borrell called on the Cuban government "to listen to the discontent being expressed by the demonstrators."

Brazil's far-right President Jair Bolsonaro expressed "solidarity" with the protesters and said the country is under a "cruel dictatorship."

Mexico and Russia, however, both warned that the situation in Cuba could be used as a justification for foreign interference in the country's affairs.

Venzuelan President Maduro sent his support to the Cuban government, saying the two countries were "brothers in good times and bad."