The Cuban Communist Party has chosen Miguel Diaz-Canel as its new first secretary. The new leader has pledged continuity, but faces economic challenges. 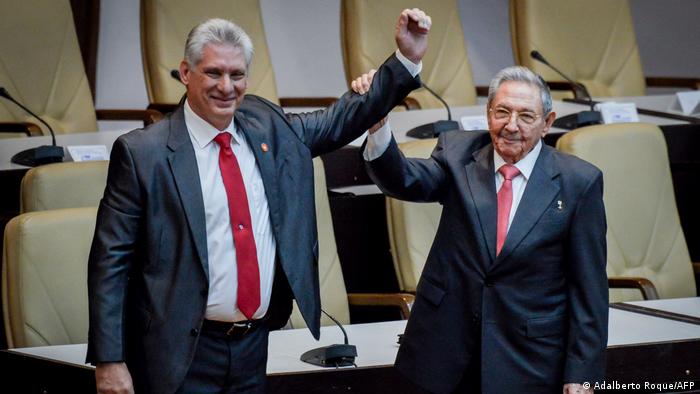 Cuba's Communist Party picked President Miguel Diaz-Canel as its new first secretary — the most powerful position in the country — at the end of the party congress on Monday.

The 60-year-old Diaz-Canel follows six decades of rule by the Castro brothers, Fidel and Raul. He also represents the first leader to be born after the revolution that ousted US-backed dictator Fulgencio Batista.

The selection of the president as first secretary of the party came as no surprise and he is expected to continue with the Caribbean island's socialist policies and one-party political system.

Diaz-Canel's rise to power began with his role as provincial party leader before he became education minister in the national government in 2009. He went on to become Castro's right-hand man in 2013.

In his first speech after being chosen, the new first secretary said he would continue to consult his predecessor.

"He will always be present, aware of everything going on, fighting energetically and sharing ideas and thoughts on the revolutionary cause through his advice, orientation and alerts in the face of any error or deficiency," he said.

He also spoke of the Cuban economy's resilience, having managed to maintain socialist achievements such as universal healthcare and education despite new US sanctions and the global pandemic.

A generational shift in Cuban leadership

Cuba has been relatively lightly affected by the coronavirus and even sent doctors to other countries, such as Italy, to help manage outbreaks.

However, the country is facing shortages of even basic goods with people across the island having to queue for hours outside stores.

The congress, which takes place every five years to choose the Communist Party leader and review policy, also chose members for the policy-setting Political Bureau on Monday.

There are few people left in leadership positions who were involved in the Cuban revolution and the new generation of leaders worked their way up the political ladder rather than through their role as guerrilla warriors.

A blast has ripped off parts of the facade of the Saratoga Hotel in central Havana, killing 27 people. A gas leak is the suspected cause.