The demonstrators are angered by long food lines and the shortage of medicine during the coronavirus pandemic. 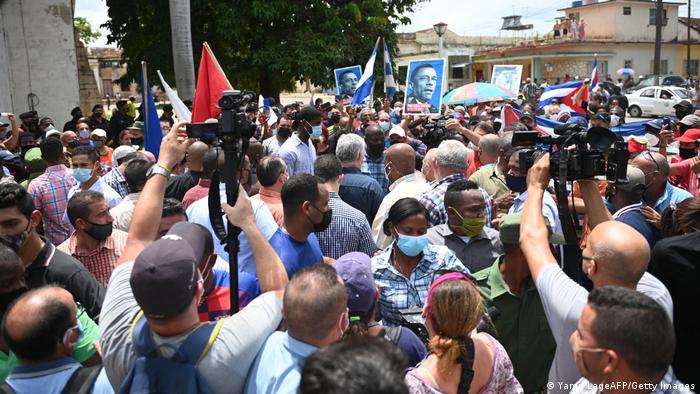 Thousands of Cubans poured into the streets of major cities such as Havana and Santiago on Sunday, with demonstrators calling for an end to the communist government.

Demonstrators chanted slogans such as "Down with the dictatorship" and "We want liberty."

The protesters are incensed by long food lines, rising prices and the lack of vital medicines during the coronavirus pandemic. The country is also experiencing a record number of new cases and deaths from the virus.

President and head of the Communist Party Miguel Diaz-Canel attended one of the protests in San Antonio de Los Banos, which is located west of Havana. Social media footage showed protesters shouting insults at the president.

Diaz-Canel has accused the United States of orchestrating the unrest, and called on government supporters to confront "provocations."

"We are calling on the revolutionaries in the country, all the communists, to hit the streets wherever there is an effort to produce these provocations," Diaz-Canel said in broadcast remarks on Sunday.

The government has deployed special forces vehicles mounted with machine guns in major cities in response to the demonstrations.

A video on Twitter showed demonstrators in San Antonio de los Banos shouting "No Tenemos Miedo" or "We are not afraid."

Ramon Espinosa, a photographer working for the Associated Press, was reportedly wounded in the face while covering the anti-government demonstrations in Havana.

The top US diplomat for Latin America, Julie Chung, wrote on Twitter that Washington is "deeply concerned by 'calls to combat' in Cuba."

"We stand by the Cuban people's right for peaceful assembly. We call for calm and condemn any violence," she tweeted.

Prominent Cuban-American officials expressed solidarity with the demonstrators. Public figures shared the #SOSCuba hashtag to raise awareness of the situation and call for foreign assistance.

"The people of Cuba are in the streets demanding freedom," Florida Congresswoman Maria Elvira Salazar tweeted. "The brutal Castro regime is using violence to repress all those demanding their rights. We must stand with them."

Rubio, a Republican lawmaker, asked US President Joe Biden and Secretary of State Antony Blinken "to call on members of the Cuban military to not fire on their own people."

White House National Security Adviser Jake Sullivan said late Sunday that the US "supports freedom of expression and assembly across Cuba, and would strongly condemn any violence or targeting of peaceful protesters who are exercising their universal rights."

Cuban foreign affairs official Ernesto Soberon condemned a "campaign" which he said aims to "portray an image of total chaos in the country which does not correspond to the situation."

Michael Bustamante, a professor of Latin American history at Florida International University, said the protests were the largest since the summer of 1994.

"Only now, they weren't limited to the capital, they didn't even start there, it seems," Bustamante said.

Cuba has been under communist rule since 1959, following the overthrow of military dictator Fulgencio Batista. The Cuban government has been accused of systemic human rights abuses such as unfair trials and arbitrary imprisonment, with the US having imposed an embargo against the country.