Poland's main opposition party has called for the suspension of Defense Minister Antoni Macierewicz over allegations of Russian military intelligence links. Macierewicz is one of Poland's most vocal Russia critics. 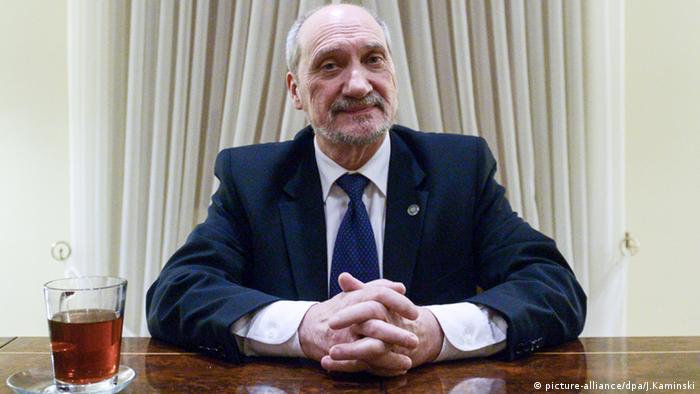 Bozena Kaminska, a member of parliament for the Civic Platform (PO) party, told The Associated Press on Wednesday that her party was "very concerned" over references in a recently published book "Macierewicz and his Secrets" by Tomasz Piatek, a journalist at the Gazeta Wyborczadaily.

The book alleges Defense Minister Antoni Macierewicz had ties to a communist-era secret security agent and, more recently, a US lobbyist. The latter, Piatek alleges, has indirect ties to Russian President Vladimir Putin and also to a Russian mafia boss.

Macierewicz has a "key, command role in Poland's security and we urgently want the prime minister to have the situation clarified and Macierewicz suspended during that time," Kaminska said. "We are most concerned by the possibility that classified defense data could be available to foreign secret services."

Macierewicz has made no comments on the allegations, but following a motion from his ministry, prosecutors have reportedly opened an investigation into Piatek on allegations of threatening a state official.

Newsweek Polska reported via an anonymous source at the ministry that Macierewicz had reacted "very angrily" to Piatek's book.

Macierewicz — a significant figure in the anti-communist underground in the 1980s — has a history of making anti-Russian statements.

In July 2016, he said Poland's "real enemy," Russia, shares responsibility for the massacres of Poles and Jews in German-occupied Volyn and eastern Galicia by the Ukrainian Insurgent Army during World War II.

In March, Macierewicz accused European Council President Donald Tusk — the founder of the Civic Platform party and Polish prime minister from 2007 to 2014 — of working with Putin to harm Polish interests following the 2010 plane crash in Smolensk, western Russia, that killed President Lech Kaczynski and 95 others.

Kaczynski died when a plane carrying a Polish delegation crashed as he was flying from Warsaw to commemorate the 1940 Katyn massacre of Polish officers by Soviet secret police.

Russia has repeatedly refused Poland's demand to return the Tu-154 wreckage and its black box recorders, citing its own ongoing investigation.

A Russian report says the crew of a Polish plane carrying Lech Kaczynski was worried that he would be angry if they refused to land because of fog. His brother rejects the findings as "a joke against Poland." (12.01.2011)