CRISPR-Cas9: A weapon against antibiotic-resistant superbugs?

Antibiotic-resistant bacteria are on the rise, causing hundreds of thousands of deaths each year. A technology to edit genes, called CRIPSR-Cas9, could help us eliminate these superbugs, a new study has found. 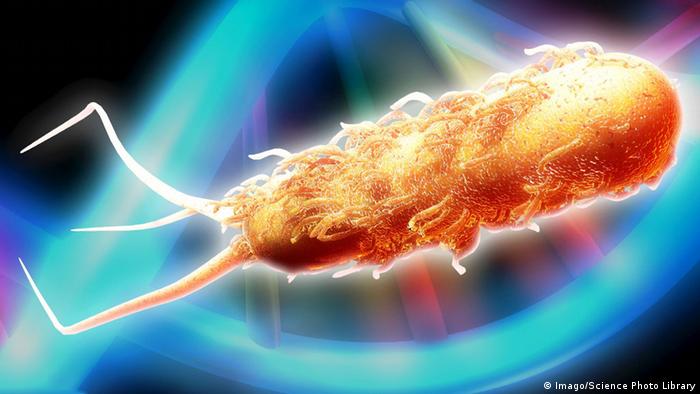 Before the discovery of penicillin in 1928, even common infections such as strep throat could be a terminal diagnosis. Antibiotics gave us a great advantage in the battle against harmful bacteria. Since then, antibiotic medicine has improved a lot. But so have bacteria.

The fast rise in antibiotic resistance is one of the world's most concerning health issues. Antibiotic-resistant infections kill about 700,000 people each year, according to the World Health Organization (WHO). A 2018 study by the European Centre for Disease Control and Prevention found that these so-called superbugs were responsible for 33,000 deaths  every year in the EU alone.

Scientists are struggling to keep up with resistant bacteria in developing new antibiotics.

In a recent study, researchers managed to kill resistant bacteria in mice guts. This method, which is still being researched, uses the famous Nobel Prize winning gene-editing technology, CRISPR-Cas9.

Scientists from the University of Sherbrooke in Canada used the technology, which works like "genetic scissors," to delve inside resistant bacteria and cut vital "genetic wires," which disabled the bacteria, killing them from within.

This result is not only promising because the bacteria were successfully killed, but also because CRISPR-Cas9 specifically targeted harmful bacteria, as opposed to killing off a whole bunch of good bacteria alongside the harmful bacteria — which is what antibiotics do.

What exactly is CRISPR-Cas9?

Imagine you have an entire book written on a very long paper scroll. Unusual, but go with it. You have a little device that can progressively unroll the scroll, search through it for a specific short sentence and cut the paper where it found it. That’s pretty much what CRISPR-Cas9 does, just on a much, much smaller scale — simply replace the scroll with a DNA or RNA sequence.

It is like a pair of molecular scissors. You give it a target DNA sequence, and it will cut precisely there. In this case, a DNA sequence belonging to an antibiotic resistance gene.

In theory, it seems simple. But getting this molecular machine inside the resistant bacteria is not easy. The Canada-based researchers managed to do so by exploiting a curious thing that bacteria can do.  They can transfer genetic material between each other when they touch. The process is called conjugation. It's kind of like being able to send files from one smartphone to another when touching them.

These scientists used CRISPR-Cas9 to target an antibiotic-resistant gene, and modified it to be much more transferable between bacteria. Then, they put it inside harmless bacteria and fed them to the mice. Surprisingly, it eliminated more than 99.9% of the targeted antibiotic resistant bacteria after only four days.

Though CRISPR-Cas9 is a powerful and precise tool with the potential to be very helpful in eliminating antibiotic resistance, researchers don't yet know if bacteria are also capable of developing resistance to this technology, too.

But it's just one example of many studies being carried out in this area. Some research groups have used bacteria-attacking viruses, called bacteriophages, as vehicles, and others have targeted the bacterial RNA instead.

On September 3, 1928, Alexander Fleming discovered penicillin by chance. Even then he warned of possible resistance. Now there are antibacterial molecules to which bacteria does not become resistant: Artilysin.

New studies have found that two genes play a major role in creating the patterns and colors of butterfly wings with the help of a gene-editing tool. It's another step in understanding where we come from, say scientists.

US researchers have discovered a new method that should make "genetic scissors" safer. Their new Prime Editing technique takes a different approach to snipping DNA. The result? Fewer errors.