New studies have found that two genes play a major role in creating the patterns and colors of butterfly wings with the help of a gene-editing tool. It's another step in understanding where we come from, say scientists. 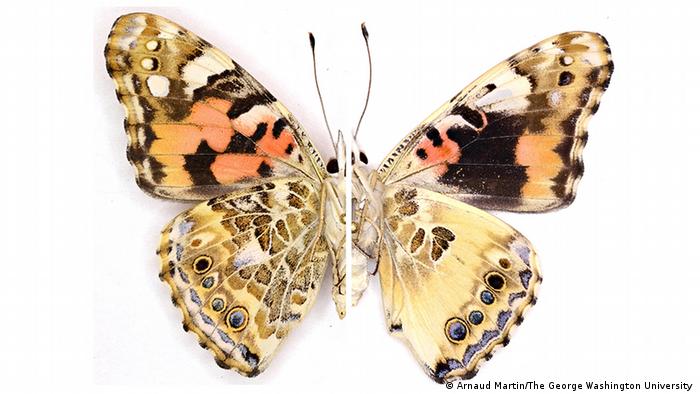 Nature is a skilled artist, if butterfly wings are anything to go by. Now scientists believe they have uncovered some of the secrets behind her talent with the help of a gene hacking tool.

Two studies published in Proceedings of the National Academy of Sciences suggest that two specific genes play a major role in dictating the complex color patterns of butterfly wings. The scientists used the CRISPR editing tool to "delete" the genes in specific butterfly species, resulting in colors disappearing, fading and bleeding into one another.

One of the studies looked at the WnTA gene — a "painting gene" — which scientists believed was important for determining color patterns and laying out the wing's basic organization. They deactivated it in seven butterfly species and followed the development of "colored motifs" in the wing from the caterpillar through to adult stages.

Patterns and colors changed significantly, showing that the gene plays multiple roles in each species, according to the research.

CRISPR: The discoverer of "enzyme scissors"

"It also enabled a massive comparison between species and showed that pattern evolution has consisted of variations on a common theme," said Arnaud Martin, an assistant professor of biology in the George Washington University's Columbian College of Arts and Sciences, a lead author of the study.

The other study looked at the optix gene and found that knocking out this gene turned colors to black and gray in four species.The results also showed optix plays a role in wing structure because it affected blue iridescence in some species. Iridescence is created by structures in the wing that interact with light.

Scientists have long known that butterflies have adopted such eye-catching patterns for finding a mate or to protect themselves against predators through camouflage or mimicry. The new studies are helping to unlock the mechanisms behind the differences in the 20,000 distinct butterfly species around today—each of these species is identifiable by wing color and pattern.

The study also has wider implications for understanding biodiversity and the "rules of life," says Martin. The rules of life outline the path to predicting how an organism might look or behave based on its genes and environment, according to the US National Science Foundation. In other words "where we come from and how."

"In a way, a butterfly wing starts as a blank canvas where patches of cells develop for a specific purpose, and we have that in our own anatomy," said Martin in a statement. "If you look at the brain, to make very complicated brains you've got to make patterns. We don't really know how all these patterns develop. That's where butterflies come in."

At a major science conference in Washington, researchers have discussed human gene editing. The overriding conclusion is that they strongly believe in the positive side of the technology. (16.02.2016)

Gene-edited embryo study: A 'milestone' - or a route toward 'genetic upgrades'?

Researchers in the US have used an experimental gene-editing technique to correct a mutation in dozens of embryos. Some hailed the development as illuminating and surprising; others say it crossed a moral line. (02.08.2017)