Gene-edited embryo study: A 'milestone' - or a route toward 'genetic upgrades'?

Researchers in the US have used an experimental gene-editing technique to correct a mutation in dozens of embryos. Some hailed the development as illuminating and surprising; others say it crossed a moral line. 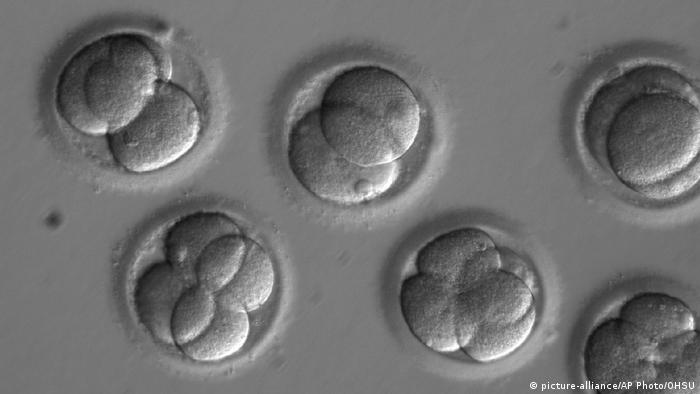 Using a new technique, an international research team was able to remove a genetic mutation that causes a heart defect from human embryos.

An article published in the journal Nature this week details how scientists used a gene-editing technique called CRISPR-Cas9 to remove the mutation and replace it with a healthy version of the gene. 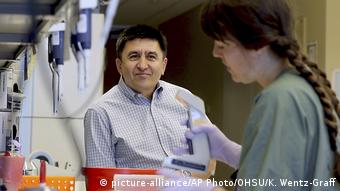 Boiled down to its simplest explanation, CRISPR-Cas9 works like a pair of scissors to selectively trim out parts of a genome and replace them with new stretches of DNA.

Oregon Health & Science University collaborated on the project with the Salk Institute and South Korea's Institute for Basic Science.

"We have demonstrated the possibility to correct mutations in a human embryo in a safe way and with a certain degree of efficiency," study co-author Juan Carlos Izpisua Belmonte said.

Scientists ran the tests using a dominant genetic defect that causes a heart condition. In naturally occurring conceptions, 50 percent of the embryos would have been free of the errant gene. The team's intervention raised that rate to 72 percent.

Professor James A. Adjaye, director of the Institute for Stem Cell Research and Regenerative Medicine at the University of Düsseldorf, told DW that any practical day-to-day impacts on health care and fertilization remain "a long, long way away."

More interesting, in Adjaye's opinion, were some of the unexpected observations within the study. Researchers believe that fewer unexpected and unwanted side effects - so-called off-target effects - were created elsewhere in the genome by the process in the embryo, when compared with using adult skin cells reprogrammed to function as a kind of stem cell.

"This tells us that the embryo has a different repair mechanism: The embryo can repair damaged DNA better than adult cells or even stem cells," Adjaye said. "So, for me, this is the big take home for everyone else in this area - that the DNA repair mechanism works much better in an early embryo, after the egg and sperm come together." 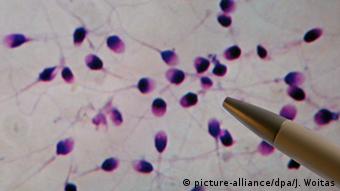 Led by Shoukrat Mitalipov, the researchers stressed that though they had found no evidence of off-target genetic changes, it did not necessarily mean they did not exist. In 58 test cases, the researchers identified only one "mosaic," a problem in which different cells in the embryo contain different genetic sequences after alteration. Off-target effects and mosaics are seen as a key weakness in the field, as they pose the risk of creating bigger genetic problems when trying to fix others.

The researchers said they chose hypertrophic cardiomyopathy for their study because they expected its removal to cause fewer off-target changes and mosaics.

Critics of the study were quick to allege that the research team - whose work cannot be taken much further in the United States given legal limitations - had already pushed the boundaries too far.

Professor Marcy Darnovsky, of the California-based watchdog Center for Genetics and Society, called the study "a pivotal point in the push toward genetically modified humans."

Darnovsky argued that this "germline modification" (modifying the genomes of eggs or fertilized eggs) study had a more sinister commercial aim at its core.

"There is no pretense to basic scientific discovery here," Darnovsky said. "The goal is clearly to develop applications that could be marketed in fertility clinics."

For now, the Germany-based researcher Adjaye is skeptical that of the idea that the technique could be used to create so-called designer babies.

"Even if it did happen, it'd be for the rich," Adjaye said. "Because it's really not going to be cheap, and I can't imagine how you could incorporate it into health care."

The research used blastocysts, structures that form in the womb several days after conception and are used in modern in vitro fertilization (IVF) treatments. It also exhausted the limits of what's legal in the United States. The logical "next step," implanting the blastocyst in a human womb to see if it develops, would not be legal.

The germline correction study would not have been legal in Germany, which has fairly strict rules governing stem cell research and IVF. Even relatively standard modern IVF processes such as screening viable embryos before implantation - to see if any of the fertilized eggs carry genetic defects - are not permitted in Germany. In no small part, the laws trace their roots back to the Nazis' eugenics research and its implications.

Proponents of gene-editing research see the potential to one day eradicate a string of inheritable diseases because a person born with edited DNA would pass these alterations on to their offspring without any treatment. Opponents, meanwhile, tend to argue that it is either an example of scientists playing God and overreaching or that it has troubling implications for a society divided not just by wealth and circumstance, but by what genes people can afford.

There is broad agreement that more research is needed on the technology itself, as well as its implications.

"It is crucial that we continue to proceed with the utmost caution, paying the highest attention to ethical considerations," the co-author Izpisua Belmonte said.

The researchers were surprised to find that nature took the driver's seat when they removed the heart condition from the genes provided by the father. Though the researchers provided a replacement strand of DNA, the embryos instead took the mother's DNA as a guide to repair the MYBPC3 mutation.

"This isn't a clear step towards a designer baby," the developmental biologist Robin Lovell-Badge told Nature. "This suggests that you couldn't add anything that wasn't already there."