People in Crimea are experiencing unusual symptoms after reports of an incident at a titanium plant. Authorities claim there is no threat to public health on the peninsula, but children have nonetheless been evacuated. 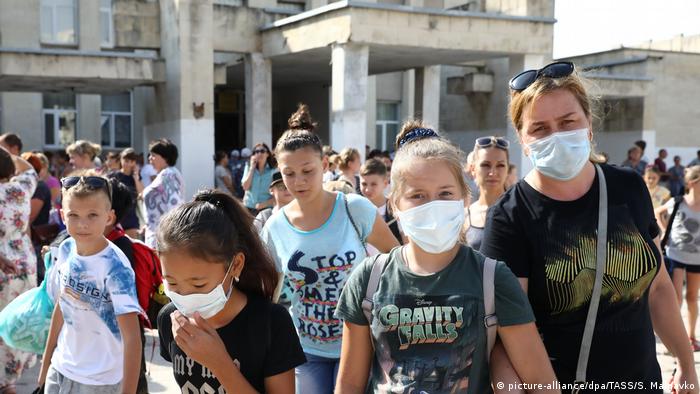 It could be the biggest environmental disaster to hit Crimea in years. Some two weeks after initial reports of a possible incident at a titanium plant in the north of the peninsula, authorities evacuated all the children from the nearby city of Armyansk.

The children are to be accommodated in sanatoriums and preschool children will be accompanied by their parents. The evacuation is purely a "preventive measure," Sergei Aksyonov, head of the internationally disputed Republic of Crimea, said on Tuesday. Local authorities continue to insist that there is no danger to public health on the peninsula, which was annexed by Russia in 2014.

On Wednesday, photos of buses taking children out of the city circulated on social media. The images, along with the slow release of official explanations, have evoked memories of the Chernobyl catastrophe.

Oily deposits on cars and roofs

Since August 24, citizens on both sides of the de facto border between Crimea and the Ukrainian mainland have been complaining of an oily, rust-colored coating settling on cars, roofs and other metallic objects such as cookware and jewelry. Leaves on the trees are said to have quickly withered and fallen off. Some people even claim to have seen a noxious cloud. 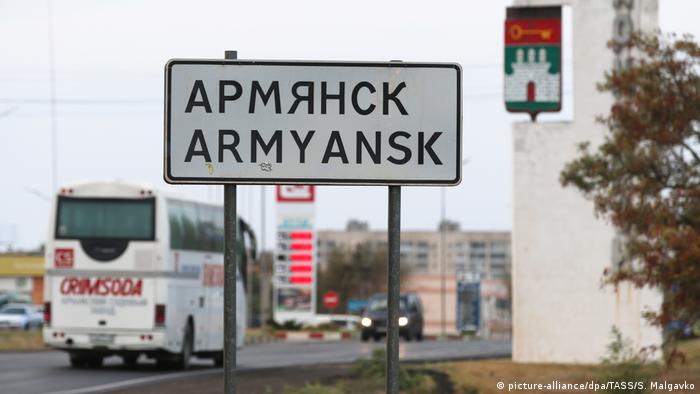 Children have been evacuated from the city of Armyansk

On Wednesday morning, residents of the village of Preobrazhenka gathered on the Ukrainian side of the border in front of a local ambulance as they waited for the latest advisory from the Ministry of Health in Kyiv regarding the incident. "Many people are experiencing respiratory difficulties, discomfort in their throat and allergic reactions," said one doctor.

"This has been going on for over a week," said Andriy, a Ukrainian border guard who arrived on the scene in civilian clothes Wednesday.

"Breathing masks have been distributed, but they don't help much," he added. "At night, when the humidity rises, your skin burns."

Within the first few days, suspicion was directed toward the Krimsky Titan plant, one of the largest producers of titanium dioxide on the European continent. It is located in Russian-controlled Crimea, a few kilometers from the border. The plant is owned, through a network of various companies, by the Ukrainian oligarch Dmytro Firtash. 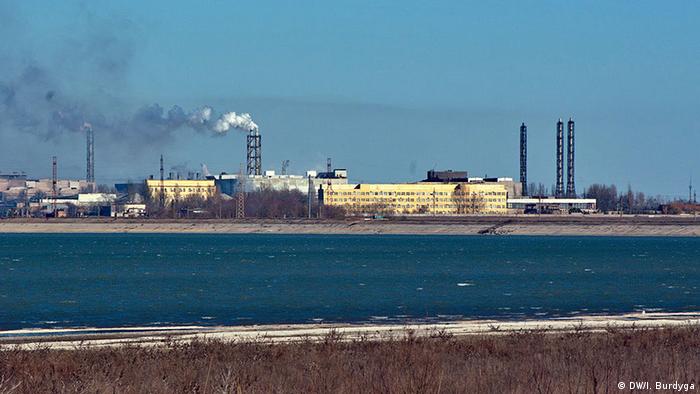 Blame has been directed at the Krimsky Titan plant, near the de facto border separating Crimea and Ukraine

Titanium dioxide is a white substance commonly used in the manufacturing of paint, plastics, paper and sunscreen, among other things. Initially, the Krimsky Titan plant denied a possible incident.

In late August, local Crimean leader Aksyonov said that there was no reason to stop production at the plant. Then, on Tuesday, he announced that the titanium facility would be shut down after all, for two weeks. Aksyonov said a high concentration of sulfur dioxide had been detected in the air. He added that Russian authorities would soon investigate the incident.

The company's reservoir of sulfuric acid is reportedly a possible cause, with the unusually long summer heat wave contributing to the partial evaporation of the protective water layer that covers it.

Efforts to pump more water into the reservoir have begun, but it remains a challenging undertaking. After Russia's annexation of Crimea, Ukrainian authorities stopped supplying it with fresh water, which was already lacking on the peninsula.