Cricket World Cup: Why the India-Pakistan contest is more than just sport

More than a billion people followed the India-Pakistan Cricket World Cup match in Manchester, England on TV, radio and online. What makes the cricketing rivalry between the two South Asian neighbors so exciting? 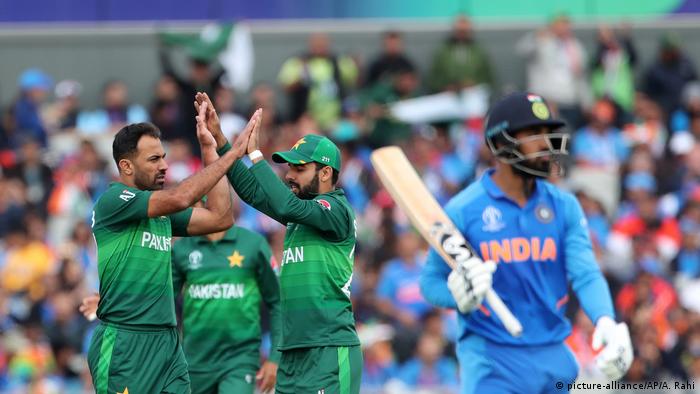 Although Pakistan's chances of reaching the semifinals of the 2019 Cricket World Cup were pretty slim – they are only above Afghanistan with three points in four matches – their fans wanted to beat India on Sunday nonetheless.

Many Pakistani fans ahead of the game believed that losing against India would be worse than losing the World Cup final. Indian fans don't think differently: "We want to win this [Sunday] match even if Virat Kohli [Indian captain] loses the Cup, we don't care," Harron Memon, an India fan in Nottingham, told the AFP news agency.

Supporters of World Cup favorites, India, had been confident that their team would beat the out-of-form Pakistani team, as their record against Pakistan in the 50-over format has been excellent.

The game was played in the northwest of England, and was twice delayed by rain. There had been 700,000 spectator ticket requests for the match.

India batsman KL Rahul told BBC radio he was pleased the way his team was playing but regretted the weather: "It's a bit of a bummer that on such a big occasion the weather plays its part and disappointing for players. Really, really happy the crowd got to see a game, to put on a show feels really good for us."

The Sunday group game between the two nations, who have had acrimonious diplomatic relations since they gained independence from British rule in 1947, was watched by over a billion television viewers and radio listeners around the world. 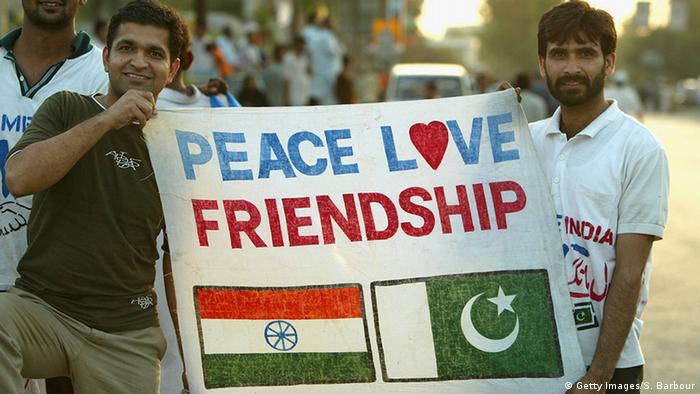 Can cricket bring the two rival nations closer together?

Cricket in South Asia, particularly in India and Pakistan, is as huge as football in Europe or South America, with millions of people devoutly following their teams. The India-Pakistan cricket rivalry could easily match football duel between Germany and Holland or Argentina and Brazil.

"India vs Pakistan is always a big game – it's like the final before the final," said Pakistan selection chief Inzamam-ul-Haq ahead of the Sunday match. "It's watched all over the world and whoever wins on Sunday will surely have a big celebration."

The Indian government cut off bilateral cricket ties with Pakistan after the 2008 Mumbai terror attacks, which New Delhi claims were orchestrated by Pakistan-based militants.

International cricket has been banned in Pakistan since Islamist militants attacked the Sri Lankan cricket team in 2009, injuring some players. Pakistan and India have played several cricket matches in the past few years, but on neutral grounds.

Ties between India and Pakistan have worsened since a border clash between the two countries in February. At the time, some former Indian players suggested the Indian Cricket Board should boycott the World Cup match in response to Pakistan's alleged support for terrorists.

But former Pakistan captain Wasim Akram urged both Indians and Pakistanis to take it as a game of cricket only.

"One team will win, one team will lose, so stay graceful and do not take this as a war," he told AFP in Manchester, where the Sunday match is being played.

"Those who project this match as war are not true cricket fans," the 1992 World Cup-winning fast bowler added.

Former India captain Bishan Singh Bedi also said the Indian fans needed to be calm. "May there be peace and tranquility while the two Asian giants fight it out on the cricket field," he said.

"And may the better team win without losing out on the etiquette of cricket."

Cricket games between the two nations usually involve ultra-patriotism, with their supporters taking to social media to troll the rival team.

Witty and interesting memes flooded the Internet on Sunday as India and Pakistan competed against each other. Most of the trolling was in good jest, while some used political images to undermine the rival country and team.

A meme posted by an Indian fan on Twitter showed Pakistan's initial joy over opener KL Rahul's dismissal turning into disappointment as Captain Virat Kohli came for batting in his place. Kohli played a brilliant inning, scoring 77 runs off 65 balls.

Another Indian team supporter taunted Pakistani bowled Mohammad Amir for stepping on the middle of the pitch, equating it with the Pakistani military's alleged territorial violations.

A Pakistani fan shared a Twitter post, which read, "Kids take down wickets… Legends take down jets," in a possible reference to the Pakistani air force shooting down an Indian fighter jet during their February military confrontation.

This was responded to by Indians, portraying the century-maker Rohit Sharma as Indian wing commander, Abhinandan Varthaman, who was briefly captured by Pakistan in February, but was hailed by Indians as a "national hero."

The 2019 Cricket World Cup in England has seen several matches cancelled due to rain. The Sunday India-Pakistan game was also briefly delayed due to light showers in Manchester. Even some Pakistani fans used memes about rain in good humor to imply that it could possibly be the only way for their team to win the match against India.

Indian journalists are being pressured to conform to the official narrative on Pakistan. Ravish Kumar from Indian broadcaster NDTV told DW that those who don't comply have faced public ridicule on social media. (01.03.2019)