COVID: Why are more men than women getting vaccinated in India?

India is accelerating its COVID-19 vaccine drive, but vaccination rates remain higher among men. Many women lack access to health information and transport, driving the disparity. 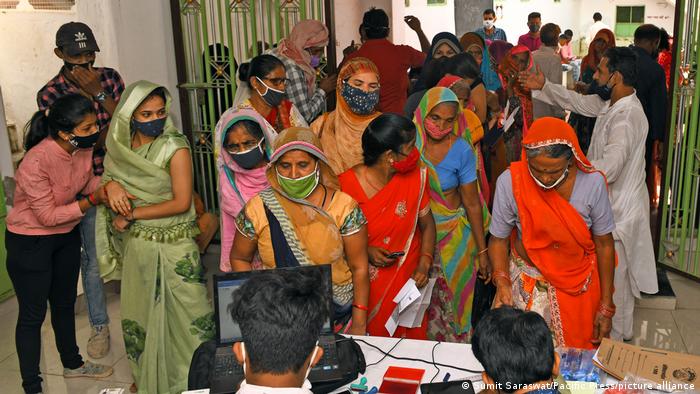 Health officials in India are accelerating a COVID-19 vaccination drive that has greatly enhanced access to vaccines in cities and villages across the country.

However, vaccination rates indicate more men than women have so far received a vaccine. A total of 1.63 billion vaccine doses have been administered in India, according to data on CoWIN, India's official vaccination website.

Of these, 830 million were given to men, compared with 792 million to women — a difference of over 38 million doses.

In Delhi, for instance, out of a total of 29.3 million doses given, 16.6 million doses were administered to men compared to 12.4 million to women. In the business metropolis Mumbai, 7.8 million women received a shot as opposed to 11.2 million men.

This is despite the latest gender ratios released by India's National Family and Health Survey (NFHS) showing women slightly outnumber men in the country, with 1,020 women for every 1,000 men.

Why are fewer women being vaccinated?

"From our research, it's a mix of issues. Women have lower access to information and technology to know when and where to register and get vaccinated, lower access to transport or ability to leave their houses, as well as acceptance issues," Reuben Abraham of Artha Global, a political economy think tank, told DW.

"Longstanding structural problems in healthcare and the gendered nature of healthcare access have resulted in families being less likely to prioritize the health and welfare of women over men," Aditi Madan of the Institute for Health Development told DW.

Madan, who has worked closely on vaccine equity, said large disparities in coverage could especially be observed in tribal-dominated areas of rural Uttar Pradesh in India's north, compared to coverage in urban, non-tribal dominated areas.

How is India responding to the omicron threat? DW's Nimisha Jaiswal reports

According to Madan, the government needs to do more in raising awareness on how to get vaccinated.

"The overall response of India has to be more motivating than threatening, especially at the community level," Madan added.

Former Indian Health Secretary K. Sujatha Rao told DW that many women, alongside other vulnerable population groups, had likely been unaware of vaccination drives if local authorities were unable to make an extra effort to reach out to them.

"Women are especially vulnerable due to a large number of factors, including lack of information, and the inability to access vaccination facilities due to lack of transport or escort," Rao told DW.

A gender divide in accessing technology and digital literacy has exacerbated Indian women being unable to get information on coronavirus vaccines. According to the NFHS, more than 60% of women across 12 Indian states have never used the internet.

"Some patterns are similar. For instance, we have observed in Mumbai a high distrust towards the vaccination drive in Muslim communities linked to the mistrust towards the government," Sophia Imad, of the Mumbai-based think tank IDFC Institute, told DW.

"In West Bengal, we observed a lower willingness to be vaccinated among women. This can be explained by women-specific rumors, such as the impact of vaccination on menstruation or access hurdles to information or transport," Imad added.