The NHS said "things are only going to get worse" and that "the health service is right at the edge." Despite the gloomy outlook, Health Minister Sajid Javid has resisted calls for restrictions to be reintroduced. 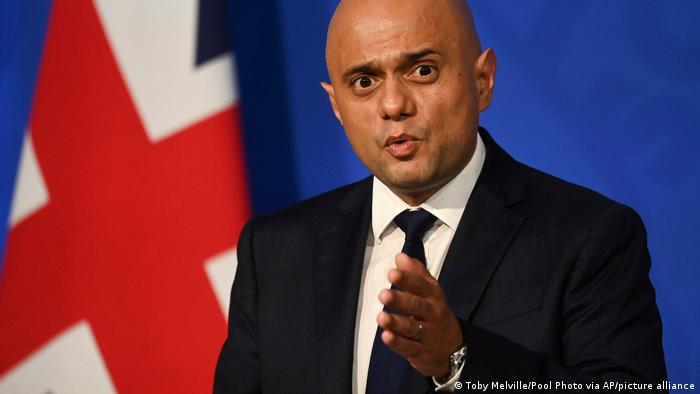 The UK could soon be experiencing as many as 100,000 coronavirus cases per day, Britain's Health Minister Sajid Javid said on Wednesday, as the country's health service said hospitals were already on the brink with winter just beginning.

The stark warning came 24 hours after the UK recorded its highest COVID death toll since March.

And despite the gloomy outlook, Javid is resisting calls for a return to the restrictions that have gradually been relaxed since the spring.

Javid said cases "could go as high as 100,000 a day," but insisted it was not yet time to revert to a lockdown or implement measures such as mask-wearing and working from home.

The government is hoping a combination of more vaccine doses and successful treatments will limit the impact of the virus this winter, and wants to avoid bringing in restrictions, having already shut the economy down three times.

Javid gave a warning that the 5 million people aged 16 and over who have yet to receive a vaccine dose needed to get one, and those already vaccinated needed to take up booster shots when offered.

Otherwise a "Plan B," involving steps such as mask mandates, a work from home order and vaccination passes to get into venues, would be implemented.

"Am I saying that if we don't do our bit, get vaccinated, all those behavioral changes that we can make, that we are more likely to face restrictions as we head into winter, then I am saying that," Javid told a news conference.

"If not enough people get their booster jabs, if not enough of those people that were eligible for the original offer... don't come forward, it's going to hit us all."

Britain has the eighth biggest death toll globally from the coronavirus, with almost 140,000 fatalities. It did have a successful vaccination rollout as the UK became one of the first countries to start administering doses, prompting Prime Minister Boris Johnson to lift almost all restrictions in England as 2021 progressed.

NHS: Hospitals 'on the edge'

But doctors have expressed concern that a sharp increase in hospitalizations, combined with pressures on the National Health Service (NHS) from seasonal viruses, could leave hospitals unable to deal with patients.

"This is the middle of October. Things are only going to get worse," Matthew Taylor, chief executive of the NHS Confederation, told BBC radio. "The health service is right at the edge... if you push much further we will not be able to provide the level of service that people need to have."

Earlier this month, a damining parliamentary report said the British government's handling of the pandemic was "one of the most important public health failures" in the country's history.

The Galleri blood test can determine whether a patient has cancer before symptoms show up. Health experts hope for a "game changer" in early cancer detection, with thousands expected to take part in the trial.

Coronavirus: US to lift travel ban for EU, UK from November

Former US President Donald Trump first imposed the measure in March 2020. But the ban will soon be lifted for fully vaccinated people from the European Union and the United Kingdom.