The UK was too slow to lock down, according to a report. Texas Governor Greg Abbott has defied Joe Biden, issuing an executive order to bar all vaccine mandates. DW has the latest. 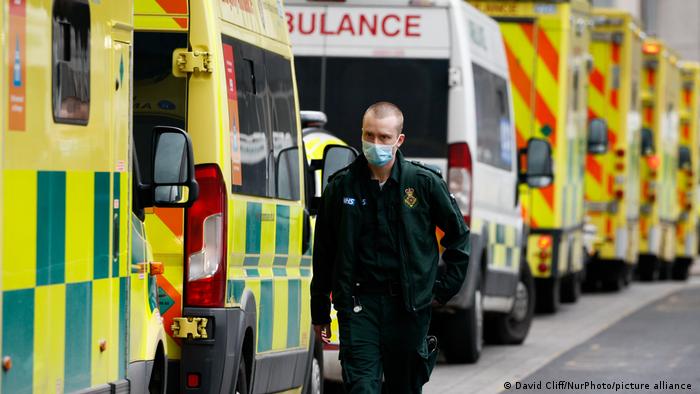 The UK's hesitancy in locking down in March 20 cost thousands of lives, according to a report

The British government's reluctance to impose a lockdown at the beginning of March last year as coronavirus infections escalated led to "one of the most important public health failures" in the country's history, a parliamentary report said Tuesday.

The damning assessment from a cross-party group of UK lawmakers found government planning was too focused on the flu and had failed to learn the lessons from previous outbreaks such as SARS, MERS and Ebola.

The government's "gradual and incremental approach" to interventions such as social distancing, isolation and lockdowns, had subsequently been proved "wrong" and cost lives, they noted.

"Decisions on lockdowns and social distancing during the early weeks of the pandemic — and the advice that led to them — rank as one of the most important public health failures the United Kingdom has ever experienced," they wrote.

The study, published by two parliamentary watchdog committees after months of hearings, comes ahead of an independent public inquiry into the government's handling of the pandemic, due to get underway next year.

Britain has been hit hard by the coronavirus pandemic, with nearly 138,000 deaths.

UK to lure back EU truckers as supply crunch bites

Meanwhile, concerns over the pandemic have prompted authorities in London to cancel the city's New Year's Eve fireworks show for a second year in a row.

The spectacle along the River Thames usually draws huge crowds from across Britain and around the world.

Mayor Sadiq Khan's office said the city was considering a number of "exciting options" to replace it.

Citing the news that Germany has likely reached the 80% vaccination mark, Gassen told the Bild tabloid that there wasn't a rate "higher than 80% nearly anywhere in the world." He thanks German infectious disease agency the Robert Koch Institute (RKI) for the fact that "freedom day is approaching."

The coronavirus pandemic lowered life expectancy in a number of countries, although Germany fared better than most, according to an international mortality study.

In Poland, Spain and Italy, life expectancy in 2020 declined by more than one year for both men and women, the institute said. It also found that countries in northern Europe generally performed better than Germany, with the exception of Sweden, where coronavirus measures were less strict than elsewhere.

The United Nations chief said more than 100 million people across the world have been forced into poverty because of the pandemic. Over 4 billion people have been left with little to no social support, health care, or income protection.

Secretary-General Antonio Guterres told an International Monetary Fund panel that global solidarity was missing, as those living in conflict-affected and poor countries suffered the most.

"Vaccine inequality is a moral outrage that is condemning the world to millions more deaths and prolonging an economic slowdown that could cost trillions of dollars, hitting the poorest countries hardest of all," Guterres said.

An expert panel with the World Health Organization has said people with weakened immune systems should receive a third dose of the vaccine. Similar measures have already been in place in countries like Israel, the US, and Germany.

Members of the WHO's Independent Advisory Group on Immunization (SAGE) said the booster would ensure that vulnerable groups remain protected against the virus. The third dose should be given between one and three months after the initial vaccination, the advisory panel said.

Republican Texas Governor Greg Abbott has issued an executive order, barring all vaccine mandates in the state by any entity, including private businesses.

Abbott's move puts him on a collision course with US President Joe Biden, a Democrat who last month called on employers to require their workers to be vaccinated.

Brazil President Jair Bolsonaro said he did not want to be "bored" with more questions about the country's COVID-19 death tally, as the Latin American country passed a grim milestone of 600,000 deaths just days ago.

Under fire for his handling of the pandemic, Bolsonaro was at the beach in Guaruja, in Sao Paulo state on Monday, when a journalist asked him about Brazil’s death toll.

"In which country did people not die? Tell me!" he responded. "Look, I didn't come here to be bored."

The government of South Korea announced that it will be donating 1.1 million doses of AstraZeneca's COVID-19 vaccine to Vietnam and 470,000 doses to Thailand, countries that have been struggling to provide enough vaccines to meet demand.

Thailand plans to end quarantine requirements for fully vaccinated travelers from at least 10 low-risk nations as of November 1, the prime minister said.

In a televised speech, Prayuth Chan-ocha said the first group would include those coming from the United Kingdom, Singapore, Germany, China, and the United States.

Protesters had violently clashed with police during the rallies against a government rule requiring COVID-19 vaccines or negative tests to access workplaces.