"The situation is serious and I recommend that everyone takes it as such," German Health Minister Jens Spahn has warned, as he called for rapid action to contain a fourth wave of the coronavirus. 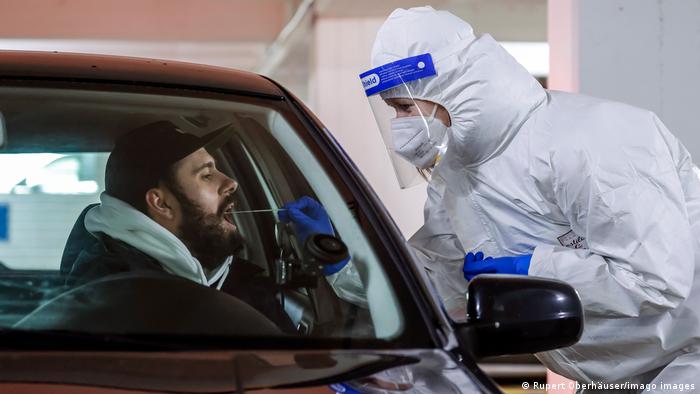 Germany must do "everything necessary" to break the fourth coronavirus wave, German Health Minister Jens Spahn said on Friday.

"The situation is serious and I recommend that everyone takes it as such," Spahn said. He and Germany's Robert Koch Institute (RKI) for infectious diseases chief Lothar Wieler warned that intensive care bed places in some places were already under pressure or full. They singled out the states of Saxony, Thuringia and Bavaria as most under strain from the fourth wave of infections.

Concrete measures will likely wait until a meeting next Thursday between outgoing Chancellor Angela Merkel and the leaders of the 16 states.

Spahn and Wieler spoke as coronavirus cases in Germany surged to record highs.

Earlier on Friday, the RKI issued an urgent call in its weekly report "for larger events to be canceled where possible or avoided, and for all other non-essential contacts to be reduced."

What you need to know about the statement

Spahn recommended that a policy of "2G+" be introduced. In Germany, "2G" is the term used for an entry policy to events and public venues, permitting entry to people who are vaccinated or recovered from COVID-19. Spahn suggested that people looking to attend such events should also be tested first.

Spahn repeated calls for people to get booster jabs and reiterated that free testing would be rolled out again in the coming days.

He said there would be a greater financial incentive for doctors to vaccinate people at the weekend.

Wieler called on those in Germany to reduce contacts and avoid meeting large groups of people indoors.

He called on German states to follow the RKI recommendations that would see closures of bars and large-scale events where the incidence levels have reached a critical point.

Germans reading again during the pandemic

What are the latest coronavirus numbers in Germany?

On Friday, the RKI posted 263.7 confirmed coronavirus cases per 100,000 people. It marked the fifth day in a row that Germany posted a new record high figure for the seven-day incidence.

German health authorities reported 48,640 new coronavirus infections in one day, according to the latest RKI dashboard figures released early Friday. This was the second-highest value since the beginning of the pandemic, after a record-setting 50,196 new cases on Thursday.

When can new measures be expected in Germany?

Booster vaccinations, testing and a unified "2G" or "3G" strategy — the terms used in Germany to describe a policy for entry to public events and venues — will likely be on the agenda at the summit of minister presidents next week.

There are concerns that ongoing coalition talks over the formation of a new government have hindered negotiations on new coronavirus measures.

Spahn criticized the length of time that it had taken to organize the meeting, saying that in his opinion, it should have taken place three weeks ago.