EU Economy Commissioner Paolo Gentiloni has said the time for discussing vaccine mandates has passed. Meanwhile, a key German lawmaker said such a move would not find majority support in parliament. DW has the latest. 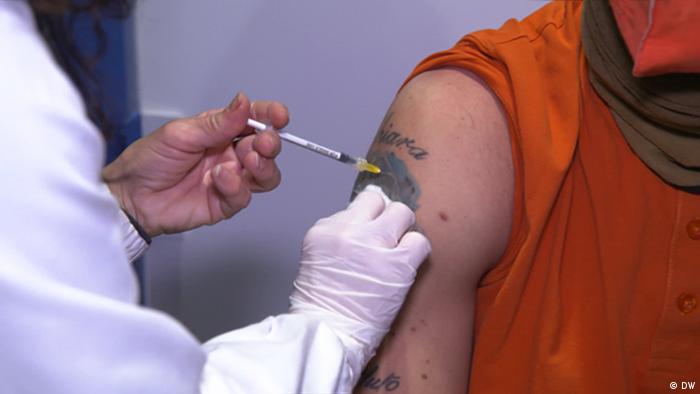 Countries around the world have seen massive protests against vaccine mandates

EU Economy Commissioner Paolo Gentiloni has said he saw no reason for governments to introduce a general coronavirus vaccine mandate anymore, given the declining severity of the pandemic.

"The discussion about mandatory vaccination against COVID-19 had its justification months ago," Gentiloni told the Funke Mediengruppe, an association of German dailies.

"But I don't think now is the time to discuss mandatory vaccination."

He noted the overall decrease in deaths and hospitalizations across the European Union.

"We are on the same path to loosening restrictions, country by country," the commissioner said.

However, he stressed that he was not opposed to compulsory vaccinations in principle.

Gentiloni pointed to orders to vaccinate against measles and added that each government must decide this issue for itself.

Prime Minister Katrin Jakobsdottir of Iceland has tested positive for COVID-19, she announced on Facebook on Saturday.

"My youngest son tested positive for COVID-19 on February 1," the prime minister said. "Since then, another member of our household has also contracted the virus, so it was no great surprise when I tested positive last night."

The 46-year-old will isolate at home for at least five days, as per Iceland's current guidelines.

The parliamentary leader of the conservative CDU/CSU, the largest opposition group in the German parliament, said the federal government will not find a majority for a vaccine mandate.

"[Chancellor Olaf] Scholz's idea of a vaccination obligation for all will certainly not find a majority in the Bundestag," Thorsten Frei of the CDU told the Bild am Sonntag newspaper.

Polls have indicated that most Germans support a COVID vaccine mandate

In the Netherlands, thousands of people partied into the night in a number of cities, in defiance of COVID-19 regulations. The move was part of a campaign called "de Nacht staat open" (the night is open).

According to current regulations, restaurants and bars must shut their doors at 10 p.m., or risk hefty fines, but it didn't appear to deter people from gathering in clubs in Amsterdam, Rotterdam and elsewhere.

Dutch authorities have said that the remaining restrictions will be lifted on February 18.

The territory imports almost all of its food, with China being its biggest source.

"The mainland authorities and the [Hong Kong] government are working closely together to firm up the detailed arrangements to expedite the logistics of food supply for Hong Kong so as to make the supply situation resumes normal as soon as possible," the government said.

At the same time, the city registered 1347 new daily COVID-019 infections on Sunday. Despite the drop from the day before, health authorities said healthcare facilities have been stretched.

Two of them were athletes or team members, one already within the Olympic "closed-loop" system. One of the infected persons was found among new airport arrivals.

All participants at the Games are completely separated from the general Chinese population in the Olympic closed loop. Everyone involved is tested daily.

Since January 23, 429 people have tested positive at the Beijing Winter Olympics.

Police in Australia gave protesters demonstrating COVID-19 restrictions until the end of Sunday to leave occupied areas in the capital, Canberra.

"They must be out by today," the police spokesperson told news agency Reuters. Police refused to say what action they would take if protesters defied the deadline.

Thousands have gathered at the capital's major showgrounds. So far, none of the protesters have been arrested.

The Cook Islands, one of the few places in the world left untouched by the pandemic, is bracing for its first community COVID cases after a visit by an infected traveler.

The traveler from New Zealand spent eight days in the community and tested positive for the highly contagious omicron variant upon returning home last week.

Boost for fight against COVID-19 in Africa

"It may be there is 'silent transmission,' where our high vaccination rate is so protective that people get COVID but so mildly that they do not realize they have it."

Nasal spray could be the future of the COVID vaccine

Would you rather receive a COVID vaccine via needle or nasal spray? Scientists are working to make nasal COVID vaccines a reality.

For months now, protesters against COVID restrictions have taken to German streets, teaming up with far-right radicals. Now, counterdemonstrators are taking a stand. DW's Oliver Pieper reports on the face off in Bonn.

Thousands of people from around France are traveling to Paris in convoys to protest pandemic restrictions. Police have been told to deal "firmly" with anyone blocking roads.