Thousands of people from around France are traveling to Paris in convoys to protest pandemic restrictions. Police have been told to deal "firmly" with anyone blocking roads. 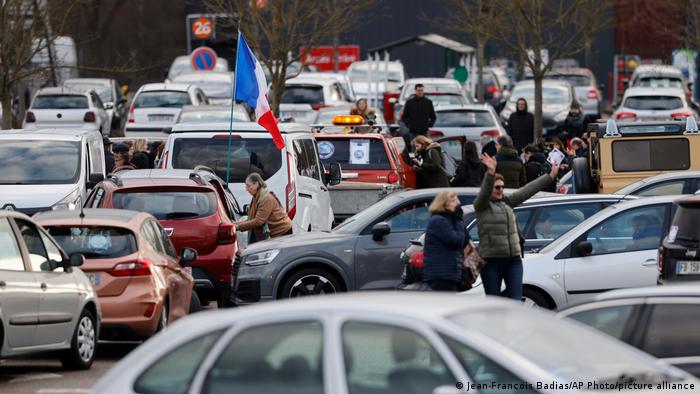 Protesters from around France are descending on the capital

Thousands of protesters in France have set off in so-called freedom convoys to protest COVID-19 restrictions in Paris on Friday, despite a ban by authorities.

Those taking part have traveled from around the country in cars, campervans and trucks and have been largely inspired by the convoys that have brought Ottawa to a halt.

Some of those joining the protests are demonstrating over the rise in fuel prices.

Police to deal 'firmly' with attempts to block roads

Thousands of police officers have been placed on standby ahead of the protest.

Officers have been conducting checks at tolling stations and along major routes. Some of those traveling to Paris have avoided detection by traveling on quieter, local roads.

Police have been given instructions to deal "firmly" with any attempts to block roads.

"If people want to demonstrate normally, they can," Interior Minister Gerald Darmanin said. "If they want to block traffic, we will intervene."

The protest's organizers have been threatened with imprisonment and hefty fines if the rally gets out of control.

Videos of blue gendarmerie armored personnel carriers positioned on the streets of Paris have been posted on social media.

Why are the protests taking place?

Residents of France are obliged to show health passes as proof of COVID-19 vaccination to go to restaurants and movie theaters or ride a train, among other activities.

The protests come as France has begun easing its COVID-19 restrictions. Wearing of masks indoors is set to be scrapped at the end of this month, and, according to government spokesman Gabriel Attal, vaccine passes could be done away with in late March provided no dangerous variants emerge.

Some automotive giants have been forced to halt operations as anti-coronavirus mandate protesters block supply lines between Canada and US. Copycat protests have also spread to New Zealand, Australia and France.