Some automotive giants have been forced to halt operations as anti-coronavirus mandate protesters block supply lines between Canada and US. Copycat protests have also spread to New Zealand, Australia and France. 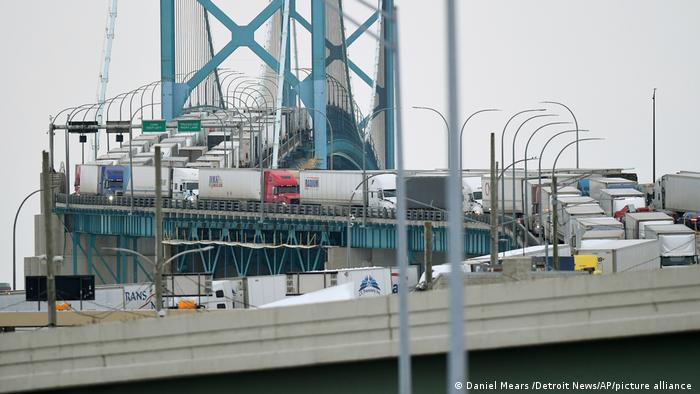 Automotive giants Ford and Toyota on Wednesday announced they were halting some production as the United States-Canada border crossings remained blocked by people protesting against coronavirus restrictions.

The self-titled "Freedom Convoy" demonstrations, now nearing the 2-week mark, began as truckers protested against vaccine requirements when crossing the border between the two countries. It later turned into a broader protest against COVID-19 restrictions and Prime Minister Justin Trudeau's government.

The disruption near the US city of Detroit has affected a number of carmakers, but the shortage has also been attributed to other factors, including severe weather and a shortage of semiconductor chips.

No end in sight to Canada's trucker protest

Amid the protests, car manufacturer Toyota said it is not expected to produce vehicles at its Ontario units for the rest of the week. A Ford engine plant and Chrysler-maker Stellantis have also halted output.

As police threatened to arrest protesters who have shut down the Canadian capital of Ottawa, Prime Minister Justin Trudeau lambasted the movement as "unacceptable" and damaging to the country’s economic recovery.

"Blockades, illegal demonstrations are unacceptable, and are negatively impacting businesses and manufacturers," Trudeau said in the House of Commons. "We must do everything to bring them to an end."

As Canada struggles to quell the growth of anti-coronavirus mandate protests, other pandemic-weary countries have seen citizens replicate the demonstrations.

In France, protesters began their own "freedom convoy," with the ultimate goal of converging around Paris and Brussels, to demand an end to COVID-19 restrictions.

On Thursday, Paris police said they would enforce a ban on any protest convoys.

"There will be a special deployment ... to prevent blockages of major roads, issue tickets and arrest those who infringe on this protest ban," police said in a statement.

However, French protest convoys have already taken off from several cities.

In the Mediterranean city of Nice, some 200 people motorcycles and private cars set off for Paris and Brussels. Many of them said they are upset about the government's health pass, a vaccination requirement that has shut out the unvaccinated from public life.

Aside from Nice, protesters have also set out from Bayonne, Strasbourg and Cherbourg, among other cities. Meanwhile, in New Zealand, more than 120 protesters were arrested early Thursday as authorities closed a protest camp outside the country's parliament.

"Police continue to have a significant presence at the ongoing protest on Parliament grounds," Superintendent Corrie Parnell said in a statement. "Parliament grounds were officially closed this morning however a number of protesters are still refusing repeated requests to leave the precinct."

"We continue to acknowledge people's rights to protest, however those who behave unlawfully will face arrest," Parnell added.