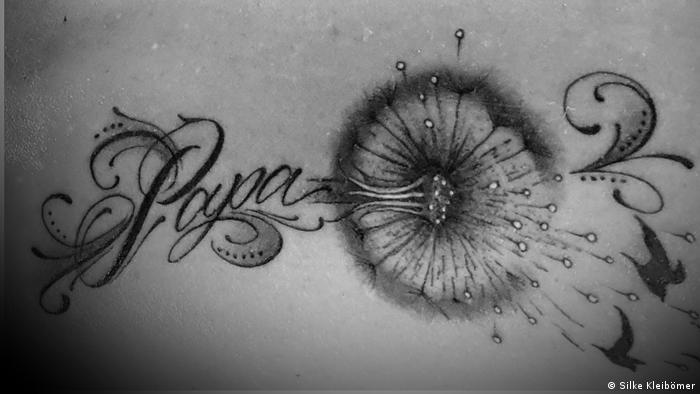 "We weren't allowed to ride in the ambulance with him or enter the hospital. We couldn't talk to his doctors. It was horrific," says Silke Kleibömer, recalling the day her father was rushed to the hospital — April 28, his birthday. He was "terrified," says his daughter, "he knew his life was coming to an end."

Hans-Jürgen had a pulmonary disease and had been on oxygen for years. He was doing so poorly that the family called paramedics. He died in the hospital's intensive care unit (ICU) just seven days later. 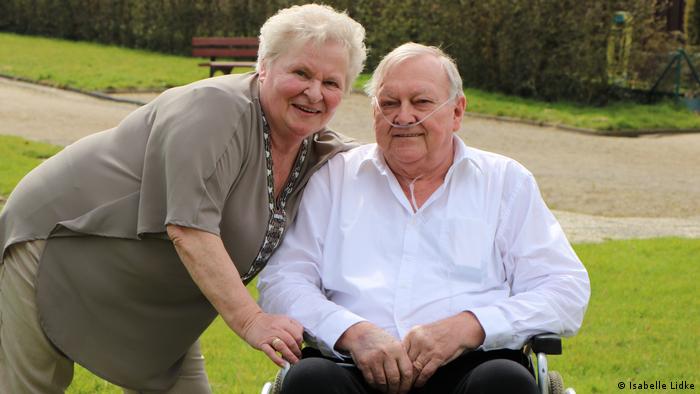 Silke Kleibömer was the caregiver for her father Heinz-Jürgen, who had pulmonary disease.

In the hospital, doctors found that he had pneumonia. Silke Kleibömer says it was impossible to talk with her father on the telephone. "We called him every day, for about 10 or 20 seconds," she says — after that he was out of breath. "Anyone who has ever suffered shortness of breath knows that it's deadly terrifying," she adds.

When Silke's mother called the hospital to find out what the family should expect, she was harangued by a doctor who yelled at her that they didn't have the time to talk with every relative who called. When the father was moved  into intensive care, no one bothered to inform the family. Silke Kleibömer, who runs an outpatient nursing service herself, says she can't understand such attitudes: "Then you have to delegate. We're just talking about making time for a phone call here."

Indignant, Kleibömer called and demanded to speak with the ICU's on-duty doctor and told him: "We're coming right now." When they got there, she and her mother got to see her father "It was hard to understand him but he had all his faculties …" Silke Kleibömer stops and begins to cry. She excuses herself and says, "He told us he loved us. He was so strong, he looked me straight in the eye and told me not to cry. My dad fought so hard. He didn't want to go."

'Papa waited for us'

Visits were possible in ICU but only for one person and only for a maximum of one hour each day. Still, the staff were accommodating.

That was also the case on May 5, when alarms began ringing at her father's bed. The call came from the hospital, saying: "You have to come now! Hurry!" Silke Kleibömer picked up her mother and rushed to the hospital. They assembled there at his side, wife, daughter, and three grandchildren: "Papa waited for us. We could all be with him. We are so grateful to the ICU staff. We weren't really supposed to be there."

She says the doctor told her "every colleague decides for themselves," adding that they may not have been so lucky on another day. She knows how fortunate she and her family were, saying: "We got to hold his hand." Then her father quickly and peacefully passed away, "You could see the relief on his face."

'No one should have to be alone'

It is unknown just how many of Germany's more than 10,000 COVID-19 victims died in hospitals and nursing homes. The Robert Koch Institute (RKI) estimates that some 4,500 likely died in institutions but no such information was listed on more than 40% of death notices.

Read more: COVID-19 — Who is particularly at risk?

"No one should die alone. And no one should have to be alone when they are not doing well," says nursing home director Raphael Maria Kloeppel. "The human aspect has to be preserved. COVID-19 or not, institutions have ways to protect people there." Kloeppel speaks from experience. She runs the St. Elizabeth Charity House in the German state of Rhineland-Palatinate, an institution with 164 patients. St. Elizabeth's had COVID-19 infections among residents and staff in spring and again in September. All of those infected were put into isolation and the spread was stopped each time. Staff all recovered as did most residents. But five people, most with pre-existing conditions, died from the infection.

'My mother burst into tears'

Detlev Jacobs looks at a photograph of his deceased mother Renate: "My mother was a vivacious woman who liked to laugh, go dancing and be with people." The mother of four was a florist and used to have her own shop. Dementia brought her to St. Elizabeth's in Koblenz, where she lived for three years. 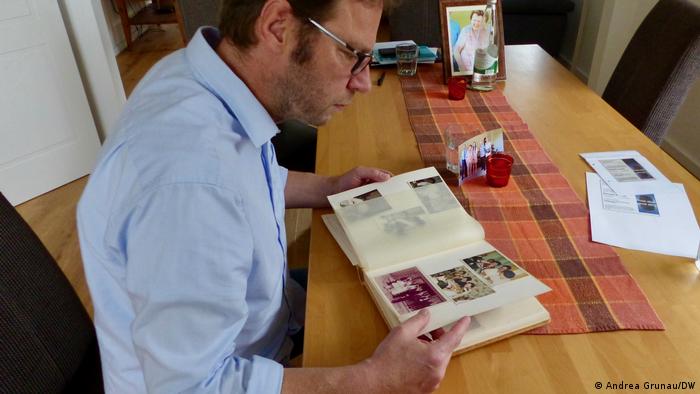 Detlev Jacobs feels it is important to take time to remember lost loved ones — and grieve.

Jacobs says that government-mandated bans on visits this March were "really awful" for his family. There was no physical contact and his mother's dementia made it impossible to talk on the telephone. After more than two months, Detlev Jacobs was allowed to see her — with hygiene rules and full PPP: "My mother burst into tears. So did I. We just sat there and cried."

Jacobs says his mother "felt abandoned because she just couldn't understand what was happening." He says her health had worsened and that she spoke less and was unable to move much on her own. Summer brought relief and hours outside in the flower garden — sitting with one another without masks, "eating a little something," it almost felt like before.

'I got there and she was dead'

In mid-September, there was a coronavirus outbreak at the home. Renate Jacobs tested positive for COVID-19. She was moved to an isolation ward with other infected residents. The house doctor called Jacobs and said that his mother was in a critical but stable condition. "'Stable,' that calmed us," says Jacobs. He says at first he didn't realize he could still visit his mother. As soon as he found out, on September 22, he rushed right over: "I got there and she was dead. It was devastating." He says he would have liked to have held her hand and talked to her before she died: "To tell her that I loved her, to wish her well. And wish her a good death and tell her she would be fine."

Renate Jacobs' death was especially difficult for Jacobs' brother. He is disabled and lives in a shared apartment. Being at-risk himself, he had not been able to leave his home for months. The last time he saw his mother was in February. He was "totally shocked" by news of her death. 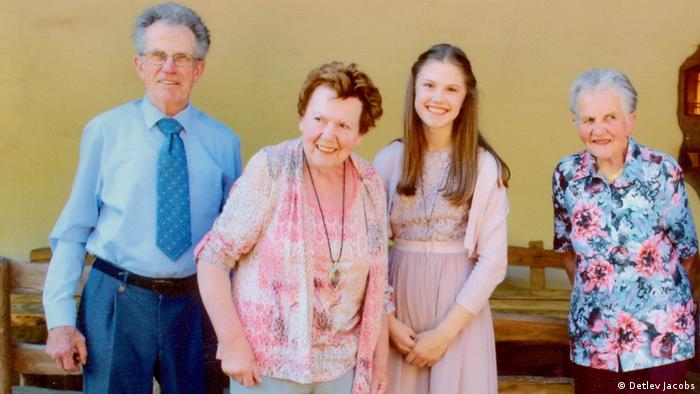 Renate Jacobs (m.), moved into a nursing home when she developed dementia.

German President Frank-Walter Steinmeier has put forth the idea of a national memorial service for the dead and bereaved. "A coronavirus death is a lonely death," he told RedaktionsNetzwerk Deutschland (RND), a joint newsroom for German newspapers. He says many relatives had poured out their hearts to him, relating how painful it is to know that the dying often cannot even bid farewell to their loved ones.

Detlev Jacobs thinks the idea is a good one. He says the dead are nameless when one only looks at numbers. An official memorial service could make clear to everyone that there are human fates behind all of those statistics.

Silke Kleibömer agrees, saying, "It's about recognition." She thinks most of us repress thoughts about death and mourning: "We just keep pushing away the things that scare us, I think that is one of the biggest problems we have in our society." 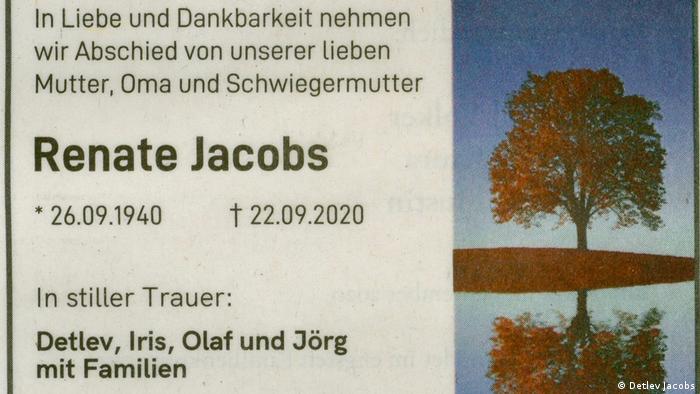 Accept grief and stay in touch

"Grief is a good companion," says grief counselor and author Mechthild Schroeter-Rupieper, "we need grief to feel better in the long run." She says those who repress grief only put more pressure on themselves, and eventually turn hard-hearted. An official memorial service would be an opportunity to recognize: "Yes, there is fear, illness, and death, and we have a ritual to deal with that." Grieving provides space for affection and appreciation she says, adding that after funerals people often say, "That really helped."

The coronavirus demands we employ every means possible to stay in touch with the ill and dying. That can be in the form of video chats or audio messages — one could even put headphones on coma patients to play them the voices of loved ones. St. Elizabeth's in Koblenz recently procured tablets for residents to stay in touch with relatives and loved ones.

Silke Kleibömer says she, too, would like to see better use made of such technologies, adding that being able to see her father would have made things easier. She says it would also be helpful if doctors wouldn't get upset with concerned relatives but instead say: "I understand your fears. I don't have time to talk right now but I'll call you back later." It meant a lot to Silke and her family to be with her father when he died: "I know he was terrified of dying. The fact that he didn't have to face it alone gives us the strength to keep on living."