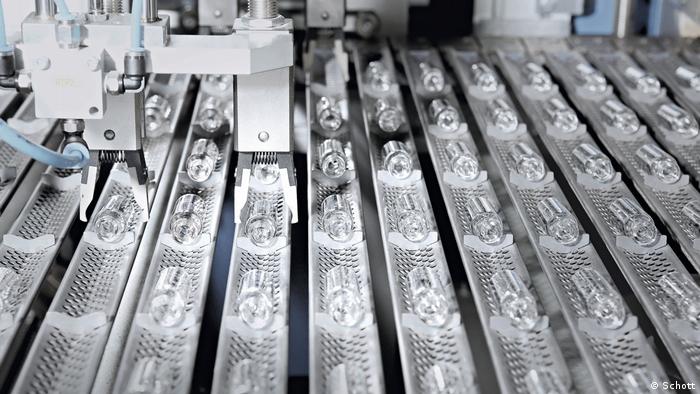 It's lunchtime at Schott's sprawling campus in Mainz, home to the glassmaker's headquarters and pharma glass-tubing production unit. The canteen is buzzing with employees, many of them relishing the meal … as well as some sun; on-site dining made a comeback just a few weeks back after being stopped at the height of the pandemic.

A towering red chimney of one of the plants overlooks the outdoor dining area, where the tables are evenly spaced out in line with social distancing norms. All tables are occupied, but conspicuous by their absence are the tubing plant staff, otherwise difficult to miss in their blue uniforms. I am told that's because the lunch hours have been divided into slots to check the spread of the coronavirus by minimizing contact between one set of employees and the other.

The strategy, along with other safety measures like a ban on visitors entering the production plants, seems to have worked so far. Schott has managed to keep production running at its facility without any disruptions, even when the virus was wreaking havoc in the region in spring.

The critical pharma tubing plant produces one-and-a-half meter-long glass tubes, which are used to make pharma vials at the company's plant in Müllheim, a small town about 300 kilometers (186 miles) south of Mainz in one of Germany's most industrialized states of Baden-Württemberg. 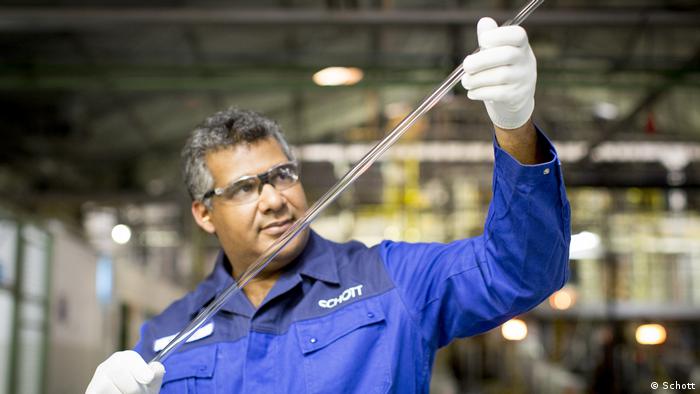 The 130-year-old firm, whose glass is used in products ranging from cooking tops to telescopes, has committed to supply enough vials to hold up to 2 billion doses of COVID-19 vaccines.

Schott, which has already supplied millions of vials to COVID-19 vaccine makers, says it's well-placed to boost capacity at its production facilities, including in the US and Germany, to produce vials for another 1 billion doses. It is estimated that the world would need some 15 billion doses, assuming the successful vaccine is a twin-dose vaccine.

"We have a one-time chance to be part of the solution. We know that there are hundreds of vaccines being currently developed and we know that all those vaccines will need the packaging and Schott is prepared to provide that packaging," said Fabian Stöcker, head of Strategy and Innovation at Schott's pharma unit. "It's very motivating and a good feeling to be a part of efforts to get rid of this pandemic."

Governments, firms, and international organizations across the globe are spending billions of dollars to launch mass production of yet-to-be-approved vaccines and to boost supply chain capabilities, making sure they are not caught off guard once the vaccines are given the green light.

Schott, which isowned by the Carl Zeiss Foundation — the owner of the eponymous lens maker, is using borosilicate glass to make the vials. The glass, invented by Schott founder Otto Schott, is often referred to as the gold standard for drug packaging, thanks to its extreme resistance to heat and chemicals and its inertness and density.

The glass is made using sand, chemicals, including sodium oxide and boric oxide, and crushed, recycled borosilicate glass, which is usually a leftover from the glass-making process. The mixture is then put in a furnace, which burns at around 1,550 degrees Celsius. Inside the furnace, known as a tubing tank, there are three chambers and several burners, which melt the mixture. All impurities are removed using chlorine gas before the liquid glass is drawn into tubes by robots.

The company says borosilicate glass is best suited for potential COVID-19 vaccines, as it avoids the interactions between containers and vaccines that can hurt the shot's potency.

The company is supplying vials to three out of four of all COVID-19 vaccine candidates in Phase I, II, or III, Stöcker said, adding that Schott was in talks with the other pharma companies to ascertain the size of the vials needed.

"At this point in time, it is not fully clear what kind of packaging would be needed. It is clear we would need a glass vial, but in some cases it's not clear what format would it be. Is it going to be a two-milliliter format or a 10-milliliter format? That would depend on how the vaccine is going to be administered later. Will it be a single shot or a multiple-dose vaccine," Stöcker told DW.

The company is benefiting from its $1 billion expansion plan launched last year as it looks to meet the increasing demand for glass vials. It plans to spend half that amount by the end of next year. The company is also pumping in additional cash on new production lines.

A united front against COVID-19

Schott's rivals, Gerresheimer and Stevanato Group, are also investing in boosting their capabilities. The three glassmakers produce billions of borosilicate glass vials every year — the type that would be needed for COVID-19 vaccines.

"The virus is not holding back at the German border, nor at the US or the Chinese or Indian border," Stöcker told DW. "People realize that it's a global problem and that we need a global answer to it. That has driven all the players in the industry to work together, putting their competitive thinking a little bit aside."

COVID-19 Special: How do you create a coronavirus vaccine?