Fears of a mutated coronavirus variant have Swiss authorities working to track down thousands of British tourists who arrived ahead of a travel ban. 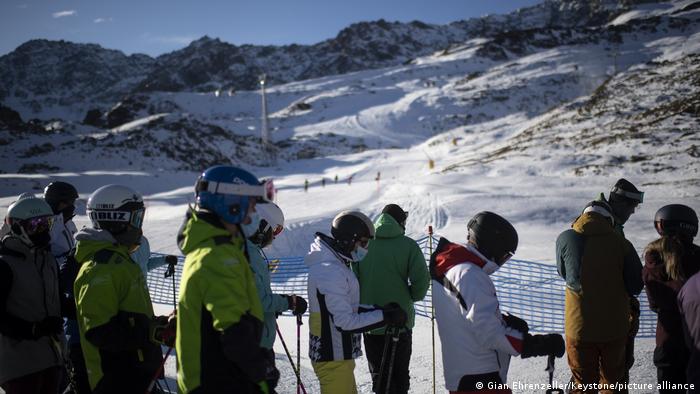 Unlike some of its neighbors, Switzerland has kept its ski slopes open

Swiss authorities on Tuesday are trying to trace thousands of visitors from Britain, many thought to be headed for the Alpine country's ski slopes, on fears they might import southern England's new mutant coronavirus.

Switzerland imposed an entry ban on travelers from the UK on Monday and ordered a 10-day retroactive quarantine for anyone who arrived from Britain since December 14. Some 10,000 people on 92 flights are thought to have entered Switzerland, including 3,500 over the weekend.

Many had landed at Geneva Airport, reported the Swiss broadcaster RTS, quoting its director Andre Schneider as describing the situation as "fragile."

Numerous cars with British license plates were also seen driving south through Germany over the weekend.

Switzerland has seen 6,781 coronavirus-related deaths and almost 414,000 infections since the pandemic began.

Epidemiologist Emma Hodcroft, co-developer of the viral tracking model Nextstrain, said a mutant variant may have already arrived in Switzerland and other parts of Europe.

"We can only say that by the end of November this mutated virus has not been detected in our locality," she said. "It is quite possible that it is already here."

Distancing and hygiene measures were being already applied, said Wiget, admitting: "The mutated virus worries us, of course."

"If the mutated virus is problematic, we will have to take [further] measures," he added.

Across the canton of Valais, ski lifts, restaurants and cafes, cinemas and fitness centers remained open, some until 10 p.m., and masks were obligatory.

Last March as the global pandemic unfolded in Europe, Ischgl in Austria's Tyrol ski region, became a coronavirus hotspot with people catching the virus there and bringing it across Europe when they returned home from crowded apres-ski bars. Multiple civil lawsuits have followed.

Later, in April, its Tyrol's governor, Günther Platter, said the region had found itself dealing with an "exceptional situation" which "just a few weeks ago was unimaginable."

Switzerland: COVID-19 and the ski season

Five people, including four local officials, had been under investigation after more than 6,000 people contracted the virus in the Tyrol region of Austria.

Despite the spread of the omicron coronavirus variant in Europe, the Ischgl ski resort is still hoping skiers will return en masse this season. The town has doubled down on efforts to restore its reputation as a safe winter sports destination.